Phoenix Labs has released another major content drop for Dauntless and it’s the Frost Escalation content drop! The Dauntless update 1.46 February 4 patch is live now and this is also called Dauntless patch 1.5.3 by the devs Head on below to see everything new in this title update.

In addition to overcoming Frost Escalation’s perilous Behemoths, you will need to actively manage your frostbite level during Escalation runs. While the Skaldish have a leg up due to their “snowblood” — a genetic mutation that makes them resistant to frostbite — you’re not so lucky.

Frostbite will carry over between encounters, and you’ll need to make the most of the new tools at your disposal … or risk defeat.

During a Frost Escalation run, you can view your frostbite level in the meter to the right of your health and stamina bars. The bar is made up of two components:

There are a number of ways to lower your frostbite level during a Frost Escalation run:

Another wrinkle you’ll want to keep in mind: Frostbite will accumulate a little faster after each Behemoth encounter you complete.

In addition to reducing frostbite, the braziers you encounter will prevent frostbite from building up as long as you remain in their area of effect. The same goes for cleansing pylons, a new consumable launching with 1.5.3. You can unlock the cleansing pylon on the Slayer’s Path and upgrade it to increase the number of pylons you can carry, their duration, and the size of their area of effect. Be sure to visit Granny Strega to craft a handful of these before heading to the frozen tundra.

Linnea Silver, the Queen of Skaldeskar, has come to aid any Slayer who braves the frozen wastes. During Frost Escalation runs, Linnea will offer boons, special blessings that empower Slayers to reduce frostbite in a variety of ways. Linnea will call out instructions based on the current boon, so pay close attention so you know what to do during the fight.

You will improve your chances against the threats found in Frost Escalation by adhering to your active boons and using them to keep your frostbite levels down.

This is how each avatar ability will aid you during Frost Escalation:

You can further upgrade your avatar abilities over the course of an Escalation run by choosing amps that directly improve your specific ability. These special amps unlock and become available on your run once you choose a starting avatar ability. 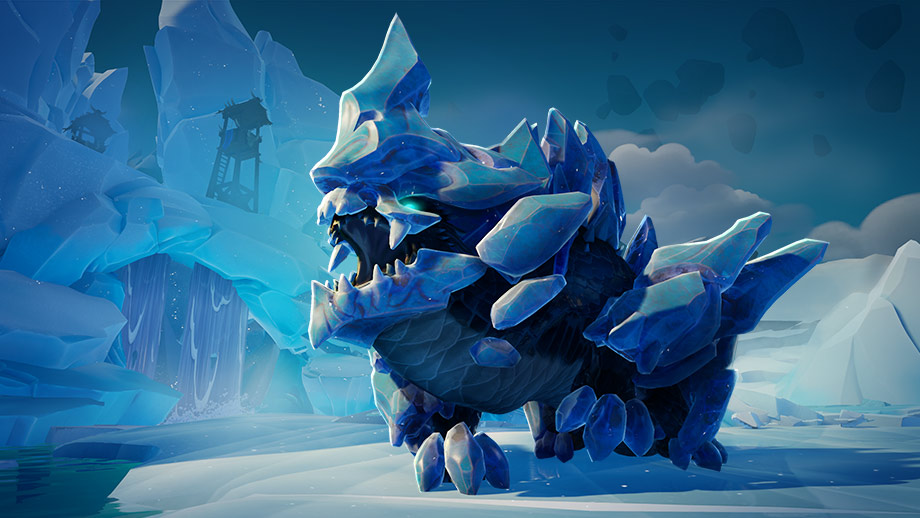 The Skaldish bring warnings of deadly Behemoth variants stalking the frozen archipelago, and the fearsome threat lying in wait for any Slayers who traverse the island chain.

The harsh biome of Skaldeskar has mutated a number of Behemoth species with powerful frost aether.

Beware the Deepfrost Skarn, with its sharp protective blades of ice, or the Deepfrost Gnasher, with its knack for hurling spheres of snow at unsuspecting Slayers. Before long you’ll also encounter a creature the Skaldish call the “Frostwülf.” Scholars like Dr. Priyani prefer the more precise moniker “Deepfrost Embermane” to identify the creature the Skaldish say can summon aether-fueled minions to its aid in combat.

The true test you’ll encounter in Frost Escalation stirs in a vast, cavernous hollow at the top of the island chain. With jaws strong enough to tear any foe to shreds, Urska will challenge you to use every tool at your disposal to come out victorious.

Arriving as part of update 1.5.3 is the Realm of Ice Hunt Pass. Here you’ll be able to unlock the striking armour of Skaldeskar, notable for its otherworldly beauty. You can collect both the Frost Shaper and Paladin of Vylmark armour sets by completing the Elite track of this Hunt Pass.

Facing a Urska in Frost Escalation will unlock schematics for all of its legendary weapons. These high-powered weapons aren’t easy to craft, but the perks are worth the extra effort.

Each legendary weapon features two prismatic cell slots — universal slots capable of holding any cell you own. Leverage them to fine-tune your build and take on even tougher challenges.

Bond your Urska weapon to another frost weapon to gain its perk (e.g. +1 Conditioning) and unique effect (e.g. After dodging, drop 3 ice mines around you on a 30 second cooldown that deal 300 damage). Weapons must be the same type and element to bond.

Activating your Urska weapon’s legendary ability will create a frost shield that blocks hostile projectiles for a period of time. Enemies that touch the shield while it is active will take damage and become chilled. This ability can also interrupt.

The Urska armour set draws its strength from three built-in perks: Aetheric Frenzy, Guardian, and Cascade — a new perk that generates up to four random collectible boosts when you use your lantern hold ability. Armour schematics unlock when you face your first Urska.

Want to show off your Escalation expertise? Earn 25 talent points in Frost Escalation to unlock the Urska ultra armour — a cosmetic upgrade set with additional fur and ice details.

Read the FAQ on the Urska here.

NEW RUMOURS
Talk to Honest Ozz and discover two brand new rumours. Don the heat of the sun itself by unlocking the Searing Dawn helmet skin from “A Vision of Fire.” If the darkness of night is more your style, complete the “Shadow Boxing” rumour for the Thorns of Dusk strikers skin.

Ramsgate’s most romantic holiday returns this Thursday with seven weapon rumours and more rewards in Ozz’s shop. Exchange gifts with friends to collect special titles, then group up to gather Hearts of Rage — a limited-time drop from raging Behemoths. Saint’s Bond begins February 11 and ends February 18 at 10 AM PST.

We’re keeping a close eye on aethersparks and these are the first steps at addressing the feedback from the community. Due to ongoing player and internal conversations, we’ve decided to make aethersparks an earned-only currency while also increasing their output.

Aethersparks were intended to serve as a reward currency that encourages players to engage with the game in various ways. With Reforged, we wanted players to experience the breadth of Dauntless in a loop. This was to avoid the problem of one endgame activity that players would grind endlessly, and ensure that players are experiencing all Dauntless has to offer. We still believe aethersparks, aetherhearts, and reforging serve this design purpose but this goal is better served if aethersparks exist solely outside of monetization.

We’re continuing to look at unpopular or underpowered cells to try to bring them into the meta. The goal is to give players more ways to come up with interesting builds that are fun and effective. This week we focused on Adrenaline, which is an interesting mechanic that changes your moment to moment decision making. We found it just wasn’t competitive in terms of damage, so we’re improving it. We also removed the negative effects on our least used cells to make them more viable.

We’ve also removed the Fireproof, Bloodless, Shellshock Resist, Insulated, and Warmth perks from all gear and replaced them with more useful perks to give players more build diversity options.

Once Phoenix Labs announces the next content drop for Dauntless, we’ll let our readers know.