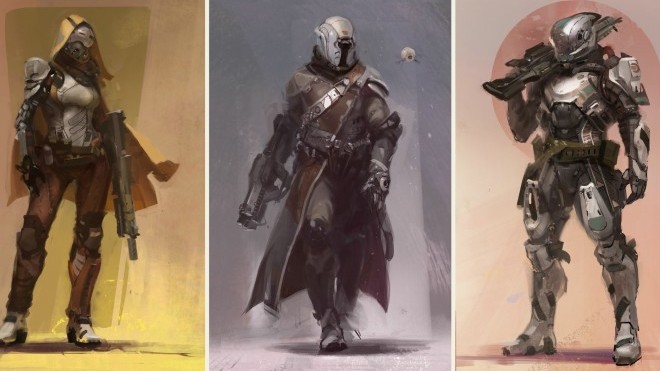 During a recent panel presentation at GDC 2013, Bungie showed fans that one way to achieve this is through character development.

Throughout the presentation, writer and design director Joseph S. and art director Christopher B. revealed the various sci-fi and fantasy elements that the team used for inspiration for enemies like the Vex, Fallen, Cabal, Hive and Titan, as well as for the hero classes like the Titan, Hunter and Warlock.

Countless ideas and pieces of concept art were cycled through to land on the models seen in the presentation, and Bungie wants to share that process with you in this quick behind-the-scenes video.

Not mentioned in the video were some of the key characteristics of each of the three playable classes in Destiny. For example, the heavily armored Titan can be distinguished on the battlefield by its distinct V-shape, utilizing 80% armor and 20% cloth. On the opposite end of the spectrum, the Warlock’s long robes create an upside-down V-shape and is made up of 20% armor and 80% cloth. Sitting in the middle, the Hunter wears 50% of both armor and cloth and is distinguished by its unique hood and use of improvised technology.

More was also shown, including some of the playable races like the Humans, the mysterious and alien Awoken, and the mechanical and sinister Exo. Sadly, the “Tiger Man” didn’t make it into production.

Stay tuned to MP1st as we learn more about Destiny!