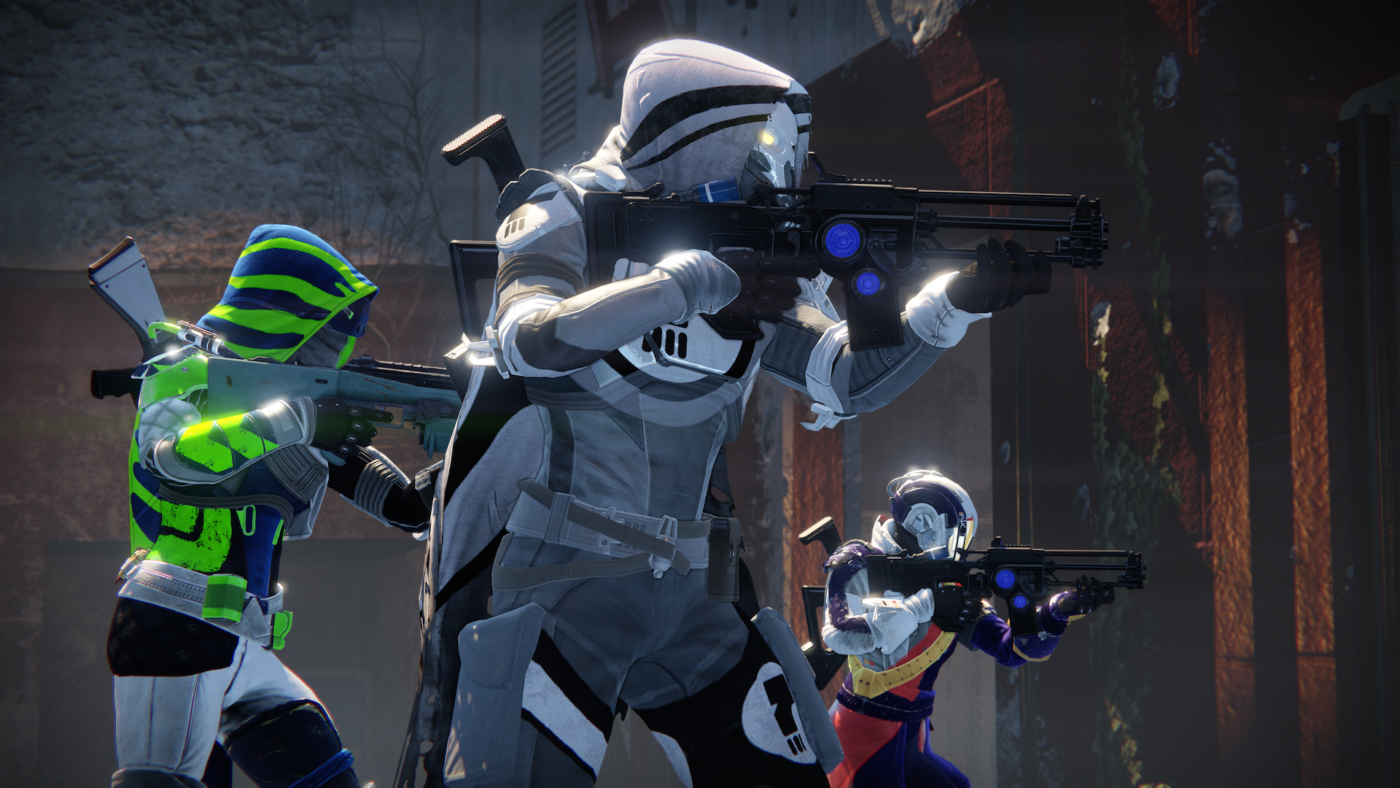 Here’s a recap of everything we learned from Bungie’s recent Destiny The Taken King live stream reveal on Twitch.

The notes include everything that was talked about by Bungie Community Manager David “DeeJ” Dague, Senior Design Lead Tyson Green, and Executive Producer Mark Noseworthy, which all pertain to how your Guardian will grow in Destiny Year Two. Though the presentation was captured within the confines of The Tower, there’s a lot to go over.

If reading isn’t for you, you can also watch a replay of the entire stream in the embed below.

Destiny The Taken King launches on PlayStation 4, Xbox One, PlayStation 3, and Xbox 360 on September 15.

Light Level now corresponds to your Character Level, which can be increased by simply earning XP in any activity, similar to the way Guardians levelled up from 1 to 20 in Destiny Year One. This ensures that anyone can reach the new maximum, Character Level 40, without having to worry about acquiring specific gear. A higher Character Level means access to better gear.

Year One Guardians who are currently level 34 will be grandfathered in to the new system at the same level, based on equipment owned. (Don’t dismantle items with high Light values on them before The Taken King releases.)

A Guardian’s Light Level is now the product of all gear currently equipped, including weapons, class items, and Ghosts shells. It is a combination of your Attack and Defense values and is now more granular in progression.

In Year Two, all new characters can pick up a Spark of Light at the Post Master which will immediately rank them up to Character Level 25, the starting point for new activities in The Taken King, and will provide an appropriate set of gear.

Attack and Defense values are being reworked and balanced between items. No effectiveness will be lost with the launch of The Taken King, but consider it a new measurement system.

Some new Perks on new items can now increase Attack or Defense effectiveness.

Intellect, Discipline, and Strength stats now display tiered levels so you know exact cool down rates for each, measured in seconds.

Guardians can now carry up to 16 Bounties. There are many new ones for both PvE and PvP activities, which are all designed to be done more quickly while participating in normal activities. Example, get Solar weapon kills.

Bounties can now be turned in from your Quest Page without having to visit The Tower. Many Bounties are now refreshed weekly. Completing all Bounties in a week will enable access to a final, tougher Bounty with Nightfall-tier rewards.

The Quest Page can hold up to 32 Quests, including Vanguard, faction, class, and story Quests. New Faction quests are now given at certain reputation levels. Each Quest Log shows you your guaranteed rewards and how close you are to achieving it.

Quest and Bounties can be tracked so their progression shows up when you pull up your Ghost in-game.

Guardians are no longer required to wear Faction items to increase reputation. One must simply choose to align themselves with a faction in order to begin gaining reputation in addition to the reputation earned for Vanguard and Crucible. Faction allegiances can be changed once per week.

Rewards earned from a Faction are then taken out of the reward stream, meaning you’ll never receive duplicates. Shaders now also have a higher chance to drop. Faction packages are now always Legendary. All Year One reputation is carried forward into Year Two.

Vanguard and Crucible Marks are now being replaced with Legendary Marks, which can be shared between characters. They are earned through daily and weekly tasks. The cap is 200, but weekly caps have been removed so you can constantly earn new Marks throughout the week. When The Taken King launches, all current Vanguard and Crucible Marks in your inventory will convert to Commendations, which can be redeemed for reputation. Dismantling Legendary items will yield Legendary Marks.

Reputation can now be earned with the Gunsmith by Field Testing weapons and completing Quests. Reputation gives you access to Foundry Orders which will reward you with a weapon from one of the new Foundries on Armsday, which is every Wednesday. The Gunsmith’s stock will refresh on this day every week.

The Cryptarch now sells Legendary Engrams that can be purchased with Legendary Marks. These will no longer turn into Shards and also have the chance of decrypting into an Exotic item.

All Emblems, Shaders, & Ships are now stored in various Terminals at The Tower. Terminals will show you which ones you’ve earned and which ones you’ve yet to earn. Because any items you’ve previously earned can be recalled from these Terminals, you no longer need to keep them stocked in your inventory.

Similar to the above, additional Terminals in The Tower will house your Exotic Blueprints which, once again, show you which ones you’ve earned and which ones you’re missing. Again, any Exotic you’ve ever earned can be recalled from these terminals, meaning you don’t have to keep them stored in your Inventory or Vault. These Terminals can be accessed account-wide, meaning you can duplicate your Exotics for other characters.

Bungie is introducing new Year Two Exotic version of older Year One Exotics with new Perks. If you own the Year One version of one of these Exotics, you will automatically be rewarded with the new Year Two version that can then be upgraded while hanging on to the previously useful Perks. Only some Year One Exotics will carried forward into Year Two. Like most Legendary items, we assume some Exotic items will be left behind for good.

Infuse essentially replaces the Ascend function from the House of Wolves DLC but will only be available on new weapons and armor from The Taken King. Infuse lets you sacrifice a more powerful weapon or armor item to upgrade a less powerful weapon or armor item, meaning all End-Game Guardians can look the way they want to and use the guns they want to without worrying about power levels.

Helmets can now be taken off in the Inventory screen. In The Tower, Guardians can choose to display any of their equipped weapons on their back by simply switching them as they would while in combat.

The Vault is now organized into pages and tabs. Weapon space has doubled while armor space has more than doubled.  Space for General items remains the same, however, thanks to the new Terminals in The Tower, Guardians will only need this space for materials and not Ships, Shaders, or Emblems.

Swords? Swords. Though Bungie mentioned nothing on it, a Sword was spotted on a Guardian’s back in The Tower, as well as in the Vault.