Destiny’s Vault of Glass Raid Won’t Be Available Until September 16, 6 Locations at Launch

It appears that Guardians will have exactly one week’s time to prepare for Destiny’s toughest challenge, the Vault of Glass.

According to a full Destiny map overview by YouTube personality MoreConsole, the raid won’t unlock until September 16, giving day-one buyers a full week to prepare.

That’s okay, really, because you’ll need to be rank 25 or more in order to even attempt the raid, which you’ll need to tackle with five of your Xbox Live or PSN buddies. 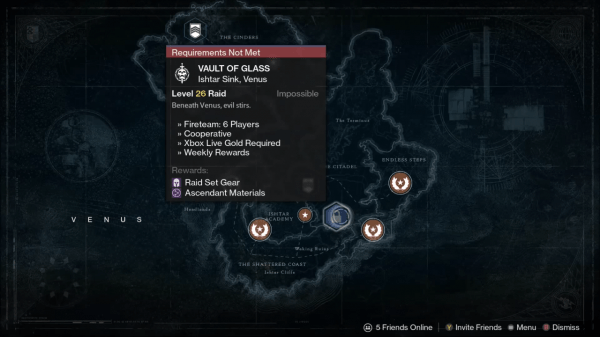 According to Bungie Design Lead Luke Smith, upon first initiating completion of the raid with your pals, you’ll also only have one week to wrap up before your progress will reset. You’ll have to figure out its mysteries quick, as Bungie has no plans to aid players in its completion either.

“By design, we don’t provide much in the way of information to groups in Raids. There aren’t waypoints to follow, or objectives explaining what to do in a given situation,” Smith explained. “Realistically, for many players, they’ll be turning to the Internet for help on how to do a bunch of the Raid.”

MoreConsole’s video also indicates that Destiny will feature six playable locations, including The Tower and The Reef. Players will also be able to take on playlists of Strike missions through The Vanguard or participate in player vs. player multiplayer matches through The Crucible.

You can check out MoreConsole’s video here. Though, be warned: It can be rather revealing if you’re planning to set things off tomorrow with a clear conscious.

While you wait, be sure to prepare for Destiny’s launch with these eight steps!

So, let the games begin September 16. Who will complete the raid first?

Buy an Xbox One Before September 13, Get Destiny or Any Other Game For Free

Destiny’s Day One Patch Is Huge, Here’s The Full List of Changes

Destiny's Day One Patch Is Huge, Here's The Full List of Changes