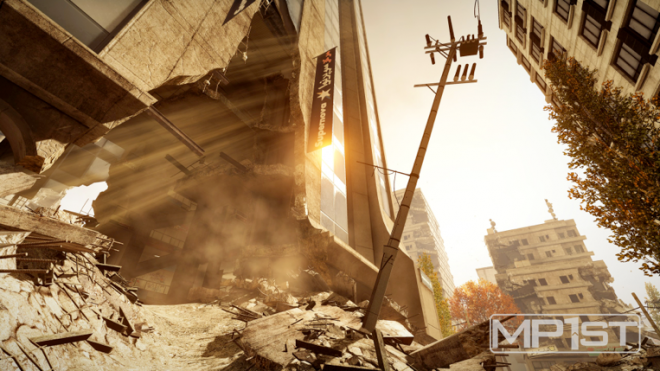 Set in the shattered districts, streets and villages of a post-earthquake Iran, Battlefield 3 Aftermath depicts a continuing struggle for supremacy and survival amongst the devastation. With operational capacity severely compromised, players will fight through the dust and rubble in a vertical and horizontal urban combat setting.

This December, Battlefield 3 fans will be treated to something a little different. Aftermath, the fourth multiplayer expansion to hit DICE’s star military-shooter, will expand upon the world of Battlefield with new locales, new vehicles, a new game mode and a intriguing new weapon. More importantly, expect a some thematic elements in your multiplayer as events in the single player will directly affect your gameplay experience.

Those who thoroughly enjoyed the unique flavor that the Vietnam expansion brought to Battlefield: Bad Company 2 might get a good kick out of Aftermath. Unlike previous Battlefield 3 expansions, Aftermath is the first to really utilize the setting in which it takes place. Sure, it’s set in the aftermath of a post-earthquake-struck Iran, something we’ve already seen in the single player campaign and some multiplayer levels, but the flavor and story runs consistently throughout every aspect of this particular expansion.

Character skins have been altered to convey the hardships these soldiers have had to endure during the earthquake, the same earthquake that nearly killed Sgt. Blackburn in the single player campaign. Both the American and Russian soldiers now look bloodied and bruised, as if they’ve just survived some rough tumbles and falling debris. Though the earthquake has passed, tremors rumble throughout the course of a match which can have devastating effects if you’re in the wrong place at the wrong time. Civilian and transport vehicles have been retrofitted with military equipment as soldiers make the most with what they’re left with. Lastly, the new game mode, Scavenger, directly ties in to the story being told here in Aftermath, but more on that later. 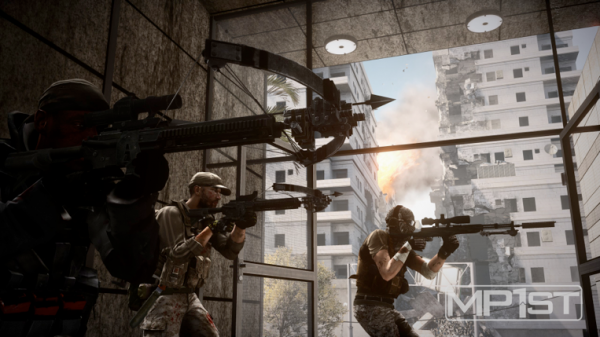 American soldiers bloodied and bruised after having survived the earthquake.

Aftermath, like previous expansions, will introduce four brand new maps to the mix, two of which have been revealed thus far; Epicenter and Markaz Monolith. Speaking to DICE Producer Craig Mcleod, I was informed that fans can expect similar map sizes to the ones included in the Back to Karkand expansion with a good mix of vehicle and infantry combat. Unlike Close Quarters or Armored Kill, you won’t find any extremes here, and as mentioned above, these four maps will be heavily shaped by the destruction that took place only moments before. That means you can expect both natural and unnatural cover thanks to the uneven and jagged terrain, as well as a lot of vertical gameplay and a number of hidden pathways that can be used to flank the enemy. Both military and civilian transport vehicles will play a large role, though they have been modified and tweaked by surviving soldiers to suit the more urban environments. Three new vehicles, in particular, are being introduced with Aftermath; the Phoenix, Barsuk and Rhino.

The particular map I had the fortunate chance to enjoy, Epicenter, reminded me of a ravaged and war-torn mix of Strike at Karkand and Grand Bazaar. Fallen debris provided all sorts of different routes, man-made or not, to the objective, but still provided plenty of room to grab a modified Vodnik with multiple gunner positions to patrol the streets in. What was particularly interesting to me was that hidden passage ways could be discovered by blowing up certain barriers with either explosives or conveniently placed gas canisters. These could then be used to flank the enemy or as a quick escape, should you find yourself cornered. As mentioned earlier, tremors literally shake the battlefield at random moments throughout a match. These tremors cause falling debris in certain areas, so if you’re not situated correctly, your looking a major headache, literally. All Aftermath maps will support vanilla Battlefield 3 game modes like Conquest and Rush – even the popular Gun Master mode from Close Quarters – as well as the newly introduced Scavenger mode. 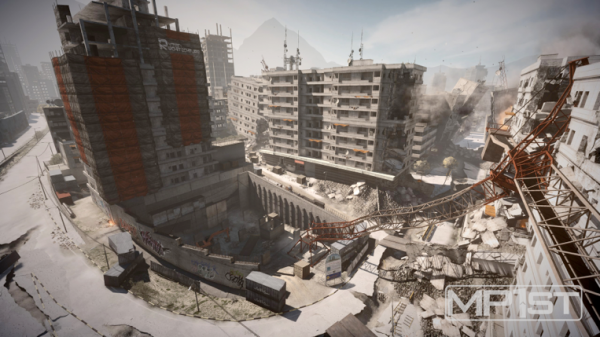 An aerial view of Epicenter, one of the four new maps included in Aftermath.

Scavenger is a heavily-themed new game mode that revolves around the story that Aftermath tells. As a soldier that has just survived a devastating earthquake in the middle of a heated battle, you’re left with nothing but your pistol and a limited amount ammo. However, just because an earthquake may have knocked you and a number of other soldiers off their feet, it doesn’t mean all those weapons have disappeared. They simply need to be found again. 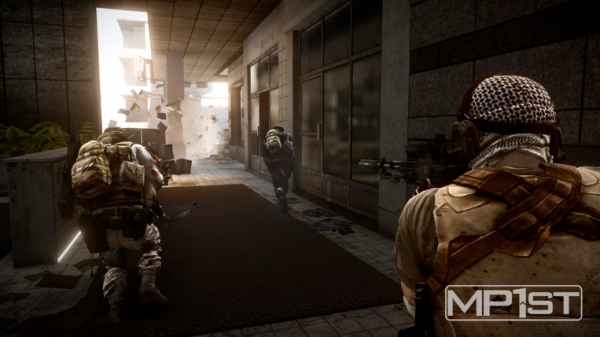 Scavenger has players searching for their weapons.

Upon starting up a match, you’ll only have your choice of class (which, in this case, only dictates your skin or look) and your choice of sidearm and specialization along with one grenade. On top of your assigned task of capturing three objective points (exactly similar to Conquest Domination introduced in Close Quarters), you’ll need to search every corner of the area to find yourself some better gear. Scattered among the battlefield are three different tiers of randomized weapons. Tier one includes your basic SMG’s or PDW’s while tier two sports your more powerful shotguns and sniper rifles. Lastly, the third tier grants you your more effective LMG’s and assault rifles. However, don’t get too comfortable with your M16A3, should you find one. Chances are, you may blow through one or two mags before you’ll need to find some more firepower. This provides an interesting, non-class-based twist on your action-packed Conquest Domination (similar map sizes can be expected) and adds a whole new layer of gameplay.

However, a new setting, new maps, new vehicles and new character skins are not all Aftermath has to offer. Get a load of the brand new Crossbow! 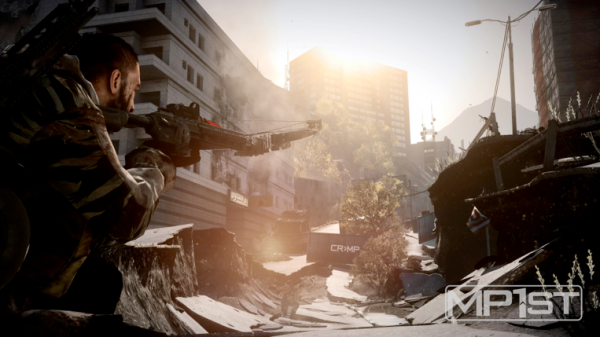 The brand new Crossbow equipped with a red-dot sight.

This unique, makeshift crossbow (a heavily-modified assault rifle, in actuality) takes up a spot in your equipment slot and doesn’t replace your primary or secondary weapon slots. While it is just one weapon, it includes two variations and sports four different ways to kill. Yes, you’ll have four different bolt-types to choose from when wielding this bad boy, as well as two different sights: the red-dot or 8X rifle scope. Your bolts include the standard tip (mid-range, mid-damage ), the scan bolt tip (proximity detector), the high-explosive bolt tip (great for vehicles) and the balanced bolt tip (long-range). The best part about this particular weapon is that you’ll be able to bring it back into regular or other expansion playlists and maps, as with previous DLC weapons.

Like previous expansions, brand new assignments and achievements will be up for grabs when Aftermath drops. These range from assignments dealing with some of the new vehicles, to those specifically aimed at accomplishing feats with the new Crossbow weapon.

In all, Aftermath is sure to shake up the Battlefield multiplayer experience this December with some new and exciting gameplay mechanics on top of all the goodies we’ve come to expect from our lovingly crafted and content-rich Battlefield 3 expansions. Look forward to more on Aftermath, including an interview with DICE producer Craig Mcloed, as we approach the coming months right here on MP1st!

You can keep track of the latest on Battlefield 3 by following us on Twitter or ‘liking’ us on Facebook.

What about Battlefield 3: Aftermath are you looking forward to the most; new maps, new vehicles,new character skins, the new game mode Scavenger, or the new Crossbow weapon? Let us know in the comments below!