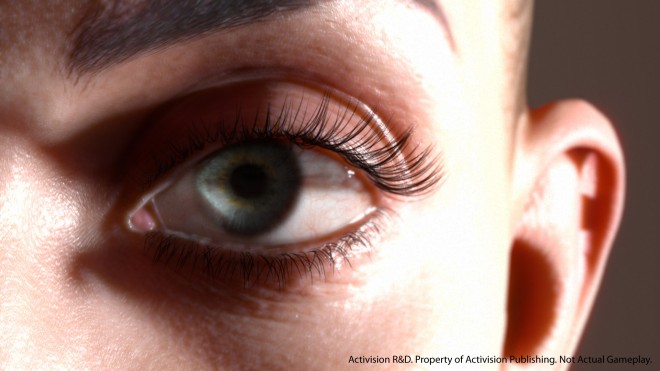 During a recent presentation at this year’s Game Developers Conference, Activision technical director Jorge Jimenez took the stage to unveil and demonstrate the company’s “Next-Generation Character Rendering” technology which, while unlikely to be seen in a Call of Duty near you, is rather impressive nonetheless.

As you can see in the video demonstration and slides below, these photorealistic, digitally created characters display true to life facial expressions and emotions while running at 180 frames per seconds using a Geforce GTX 680.

“For us, the challenge goes beyond entertaining,” said Jimenez. “It’s more about creating a medium for better expressing emotions, and reaching the feelings of the players.”

See for yourself in the video presentation below.

As per the video’s description, “this animated character is being rendered in real-time on current video card hardware, using standard bone animation. The original high resolution data was acquired from Light Stage Facial Scanning and Performance Capture by USC Institute for Creative Technologies, then converted to a 70 bones rig, while preserving the high frequency detail in diffuse, normal and displacement composite maps. It is being rendered in a DirectX11 environment, using advanced techniques to faithfully represent the character’s skin and eyes.”

Though not yet actual gameplay, it’s interesting to see where Activision’s latest tech will take them and whether or not we’ll be seeing high-fidelity characters such as these in a game like Call of Duty any time soon. We can only hope.

In addition, check out the gallery below for some more scary real screens.