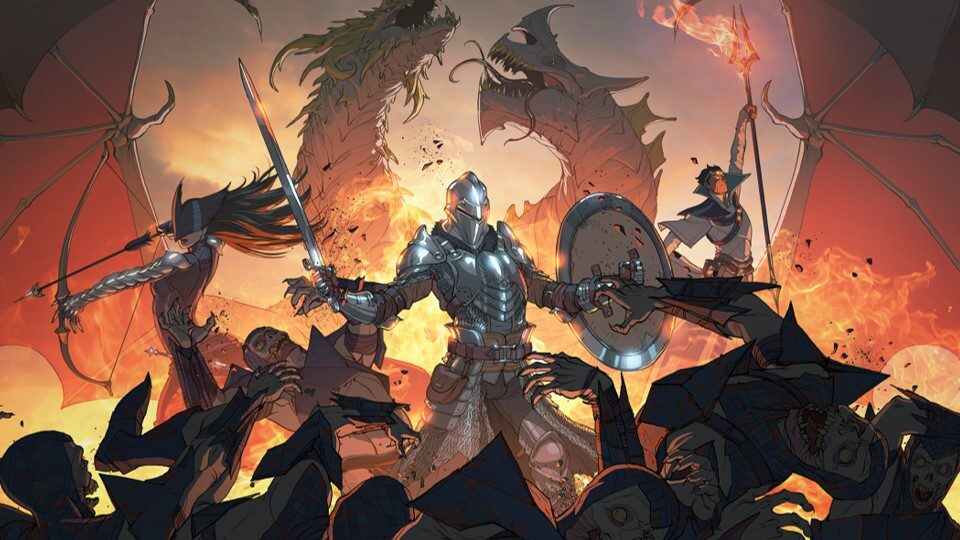 Here’s what BioWare had to say about the upcoming Dragon Age game, as well as new short stories for the franchise.

Speaking of building new worlds and stories for you to explore, we want to let you all know that we’re still hard at work on building the next single-player focused experience for Dragon Age. We’re excited for next year when we can talk more about what we’re working on.

“Well? You tore me away from an experiment for this, Volkarin.” The shorter necromancer caught a hissing monster of bone and dried gristle in a skein of light. A twist of her hand, and it was ripped apart. “What does the wretched thing want?”

“Fine.” Johanna Hezenkoss scowled at the skull cradled in Emmrich’s hand. “Anything to stop that howling.”

The skull had started screaming, ceaselessly screaming, inside its niche in the Cobalt Ossuary of the Grand Necropolis. An attendant had noted it, informed the Mourn Watch, and a pair of necromancers had been dispatched.

They came to a junction. Emmrich placed the shrilling skull on a plinth. “What insights on the dead it could—”

“You already told me about your paper.”

“Come now!” Emmrich turned. “What sort of passion drives one spirit above the rest? What tangle of thoughts and heart returned this soul?”

“You must admit it’s an interesting variation on possession!”

The skull’s shrieks bounced through the corridor.

“It’s only some petty spirit too weak to become a demon.” Johanna ducked under a collapsed lintel. Statues of corpses lined the passage. A flick of her hand, and a green bolt of light smashed into a lanky shape lurking at the end. The demon twisted up, wreathed in smoke, as another volley hit. It gnashed its teeth and collapsed into itself.

“There. It should be safe for your corpse whispering.”

Emmrich closed his eyes. Whispers came, and when he spoke, the air vibrated. “By breath and shadow. By endless night. Tell us what haunts you.”

The skull’s sockets flared green. “Divided. Cold. Two graves where there should be one!”

“Johanna!” Emmrich cleared his throat and turned back to the skull. “Tell me: what will grant you rest?”

“Take this one… to sunken black walls… by silver flames…” The skull’s glow flickered, faded. It resumed its earsplitting shrieks.

“You possess a grand talent, Volkarin.” Johanna gave the smallest inclination of her head. “And you’ve honed your command of sub-astral manifestation.”

Emmrich beamed. “Why thank you.”

“But what does this wailing nuisance want down in the Crescent Fane?”

Emmrich leaned over a coffin ringed by bowls of silver fire. He placed the skull next to the body of an old woman, humbly dressed but crowned with white roses. The screaming stopped.

“Your wife left gently, in her sleep, last midnight.” Emmrich smiled. “The records confirm she also wished to be interred together. You’ll not be parted again.”

There was a sigh. Did the old woman’s mouth quirk, or was that the dancing flames?

Johanna snorted. “All that fury, ending in another grave.”

“Oh, I don’t know.” Emmrich ran a hand along the coffin’s snowy marble. “It would be rather fine to possess such an enduring affection. Besides, you did see this through.”

“Someone had to ensure you weren’t beheaded while chattering with the dead.”

“I am grateful for enduring friendships, as well.”

They made their way back up the Grand Necropolis in companionable silence.

Warden Evka Ivo groaned and lay back against the rough stone. The ogre was dead. A half dozen arrows protruded from its throat and the left side of its skull was crumpled inward from the final blow of her dwarven hammer. She could rest for a moment.

“They made it out,” Warden Antoine said from above her.

“Good,” Evka said. The point of putting themselves between hapless miners and ogre-shaped death was to get the hapless ones out. Even if that meant a few bruises. And maybe a cracked rib. Antoine lowered himself to the ground next to her, wincing at his own aches. The two lay on their backs, staring up at the shadowed cave ceiling.

“We made it too,” Antoine offered. He picked up a stone and fidgeted it between his fingers. The elf never could stay still.

Antoine laughed. “You said that last time we fought an ogre.”

“It was ogres last time. More than one. The third nearly took your head.”

Evka smirked, recalling the corrosive tang of Antoine’s experimental concoction. “That’s right. You nearly blew us both up.”

“I never said it was a good plan.” Antoine tossed the stone into the air and caught it. “But the halla went back to those fields. There were fawns last time we were through.”

“You remember the darkspawn outside Kassel?” Evka asked. The darkspawns’ blighted presence had poisoned the water. The brackish swamplands filled with grey sludge. Birds died. Villagers begged for rescue between gurgling coughs. Evka had walked from the village alone and into a monstrous horde.

“You were sick,” Antoine said. “But you bought me time.”

“And you stopped the spread.”

“You said I owed you soup.” Antoine gave the stone another toss.

“There was that demon in the Merdaine.”

“I don’t think it liked you either.”

“At least our book was only singed. That mystery story. We were on the last chapter.” Antoine grinned. “I fared better than you against those hurlocks in the High Reaches.”

“There’s barely a scar. I wasn’t bit by a… what was that thing outside Arlathan?

Antoine’s hand went briefly to his shoulder. “I still don’t know. But we made it. Close as it was.”

“Point is, there’s a lot of ways for Wardens to die,” Evka said.

“And a lot of days you keep living,” Antoine countered softly.

Antoine didn’t respond. He set the stone down. He hadn’t known.

Dernel hadn’t been that old, but the blight in his blood—in all Warden blood—told him it was the end. Evka had walked him to the Deep Roads one last time. He’d die fighting the monsters below.

“Being a Warden kills you one way or the other,” Evka said. “And we won’t know when for either of us.”

From deeper in the cave, Evka could sense darkspawn moving. They didn’t have much time before more monsters arrived. But they had some.

He picked up the stone, put it down again, then turned all his focus on her. “Evka Ivo, will you marry me?”