Following today’s earlier leaks, EA has launched the official website for their upcoming shooter, confirming “Battlefield Hardline” as the project’s official title and dropping some fancy new key art that once again suggests a focus on SWAT vs. criminals gameplay.

The page also indicates that an official unveiling will take place during EA’s E3 2014 media briefing on Jun 9 at noon PST. 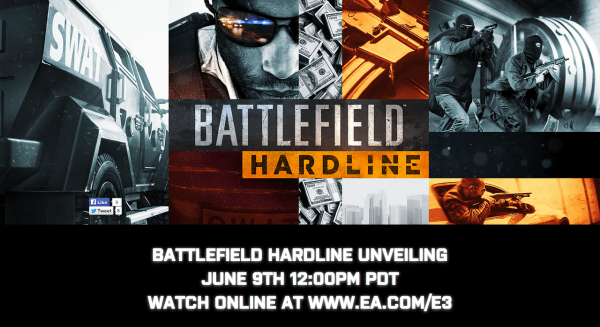 Check out the official site here.

A significant Battlelog leak from earlier this morning outed some of the game’s first details, mentioning new weapons, gadgets, game modes, factions, vehicles, and locations. It also pointed towards Visceral Games as the primary developer for the project, coming to PC, as well as next-gen and current-gen platforms.

On behalf of everyone at EA and Visceral Games, I’m fired up to confirm our next project – Battlefield Hardline. The game launches this fall and it’s a brand new series in the Battlefield franchise, set against the backdrop of a genre we all love – the war on crime and the battle between cops and criminals.

Several years ago, I was at an internal EA meeting in Barcelona with creative leaders from across the company. It was there I met Karl Magnus Troedsson, the GM of DICE, for the first time, and we immediately began talking about games – I’ve always loved Battlefield and KM was a huge fan of Dead Space, which I was working on at the time. We started talking about different ways we could work together, different ways we could take Battlefield and action games in a new direction. It was then that this project that became Battlefield Hardline was born.

There’s been a lot of buzz today about Battlefield Hardline – we’re getting ready for E3 and fans found some details on our website about what we’re working on for the show. We’ve been reading all of your comments and we’re excited to be going into more detail soon on the ways we’re adding new twists and turns to the foundation of Battlefield multiplayer and more about how we’re bringing our strengths at Visceral to single player.

Looks like we’ll be learning much more at E3 this year. What’s your take on this new direction for the Battlefield series?