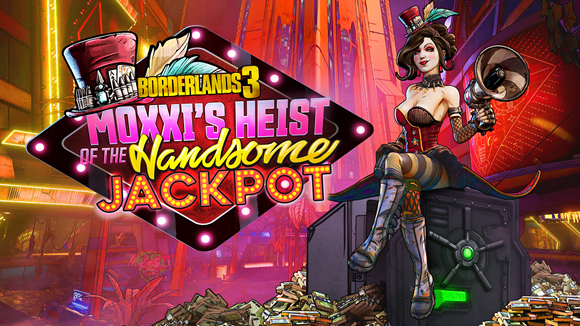 Check out the Moxxi’s Heist of The Handsome Jackpot below along with official game info straight from Gearbox.

In short, Moxxi’s recruiting you to seize control of a derelict space station built by the infamous Handsome Jack back when he was still President of the Hyperion corporation. The Handsome Jackpot is quite possibly the gaudiest gambling spot in the galaxy, with neon signs, slot machines, and gold statues all over the place. It’s also crawling with multiple models of deadly Hyperion Loader Bots, as well as lunatic looters who’ve been trapped on board ever since Jack’s death. But that’s not all:

Gearbox mentions that Moxxi’s Heist of The Handsome Jackpot is tuned for characters who are at least level 13, though it will automatically scale up so that higher level players can find a challenge and the appropriate loot. You’ll also need to have unlocked Sanctuary III in order to access it.