As promised, PlayStation users are getting something a little extra to call their own for an entire year in Destiny’s first expansion, The Dark Below, arriving next week.

First up is another Strike located on Mars called The Undying Mind. Players will “step back into the coveted dangers of The Black Garden to face a timeless Vex machine-beast that has survived for ages,” reads the description on the official PlayStation Blog. “Prepare for firefights amidst vine-laden pillars and decaying paths in an effort to destroy the ancient evil.” 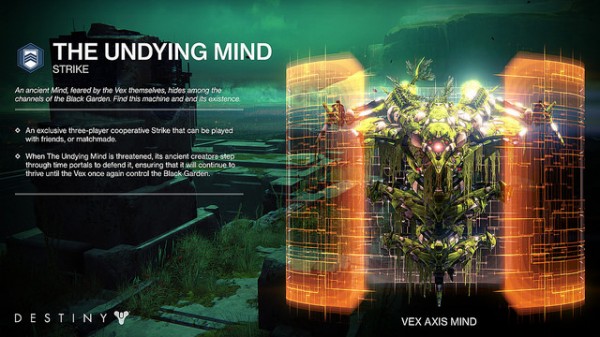 Backing adventurers up is a new Exotic shotgun called The 4th Horseman that packs “four barrels, five shots, and a sizzlingly fast fire rate will eat away at the Vex legions in short order.” 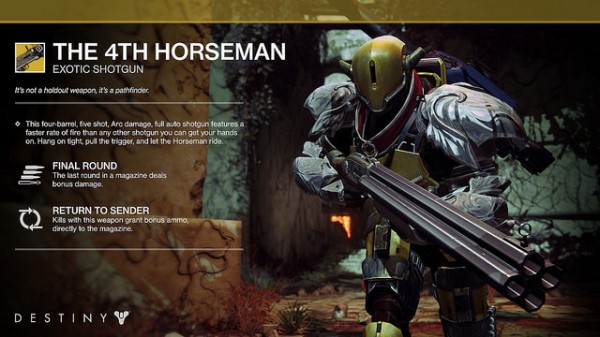 Destiny Expansion I: The Dark Below arrives December 9 on PlayStation 4, Xbox One, PlayStation 3, and Xbox 360. The Undying Mind Strike and The 4th Horseman Exotic Shotgun will be available to Xbox Users next Fall.

As for all users, the new expansion will introduce three new Story Missions, one new Strike, one new Raid, three new Crucible maps, new Legendary and Exotic gear, a new vendor, and a Light Level cap increase to 32.

The Story Of Evolve Teased In New Trailer, Get The Details On New Hunters, Maps, and Game Mode