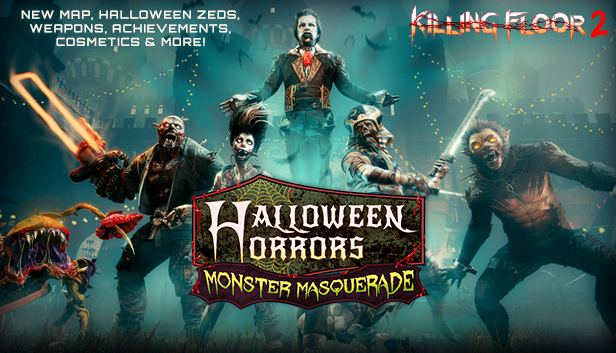 Halloween is just around the corner, and with that comes a new themed DLC for the zed-killing FPS, Killing Floor 2 Halloween Horrors Monster Masquerade. Following the release of Killing Floor 2 Infinite Onslaught back in March, developer Tripwire Interactive says that this is their largest update of the year. The free DLC includes a brand-new Monster Ballroom map, in addition to new enemy models, weapons, and cosmetics.

The map is set at a gothic castle in Transylvania, where players have been invited to a “Halloween housewarming party” at the Monster Ball. The castle has also been upgraded with strobe lights, flamethrower traps, black lights, dance floors, swinging axes, spiked pits, and “a killer stereo system.”

For the update, all enemies will receive new models, visual effects, and sound effects. The new wereslashers, fishpounds, and blob bloats will fill the castle in an effort to ruin your party.

But players will also be armed with a new arsenal to fight back.

*This chained bat for the Berserker class is available exclusively on Steam for players with ROAD REDEMPTION in their Steam library.

A host of new monstrous cosmetics will be available for players as well, but only for a limited time.

On the progression side of things, the update includes new achievements and the ability to reach prestige 2, which includes more prestige weapon skins.

Killing Floor 2 Halloween Horrors Monster Masquerade is out today on PlayStation 4, Xbox One, and PC.