G2A Buys Un-Switchable Sponsored Ads to Show Up First Ahead of Official Game Listings, Devs Ask Buyers to Pirate Instead

Do you buy games on G2A? If so, you might want to consider not doing that. While where you get your games is another story altogether, it seems the ethically questionable online retailer has made some rather interesting marketing moves, as it has now bought sponsored ads (which can’t be turned off for some reason) on Google. If someone searches for a specific game that the retailer sells, you will see their games for sale first ahead of the official game listings!

Note that developers DO NOT make any money (as in ZERO) on games people buy through the non-official sponsored ads. This G2A ad brouhaha has been brought to the forefront by indie publisher Mike Rose, who heads the No More Robots game studio. Mike took to twitter early this morning to express his thoughts on G2A along with a demonstration on how the ad cannot be switched off (besides ad blockers).

Please, if you’re going to buy a game from G2A, just pirate it instead! Genuinely!

Devs don’t see a penny either way, so we’d much rather G2A didn’t see money either

As one can expect, multiple indie devs have chimed in against this practice and what’s more, they are even asking gamers to just pirate their games if they’re buying from G2A, crazy right? The rationale behind this is that regardless if you pirate their game or buy it from G2A, both means zero profits for the devs, but the former choice at least doesn’t add more coin into G2A’s pockets.

If you can't afford or don't want to buy our games full-price, please pirate them rather than buying them from a key reseller. These sites cost us so much potential dev time in customer service, investigating fake key requests, figuring out credit card chargebacks, and more. https://t.co/25NWxrj8f8

Please torrent our games instead of buying them on G2A https://t.co/gktACBP1KZ

G2A are thieves, please don't buy from them. https://t.co/MrNJgEgXzC

If you’re curious how G2A and their whole scumminess works check out the screenshot below, which explains it nicely (thanks, DannyOnPC): 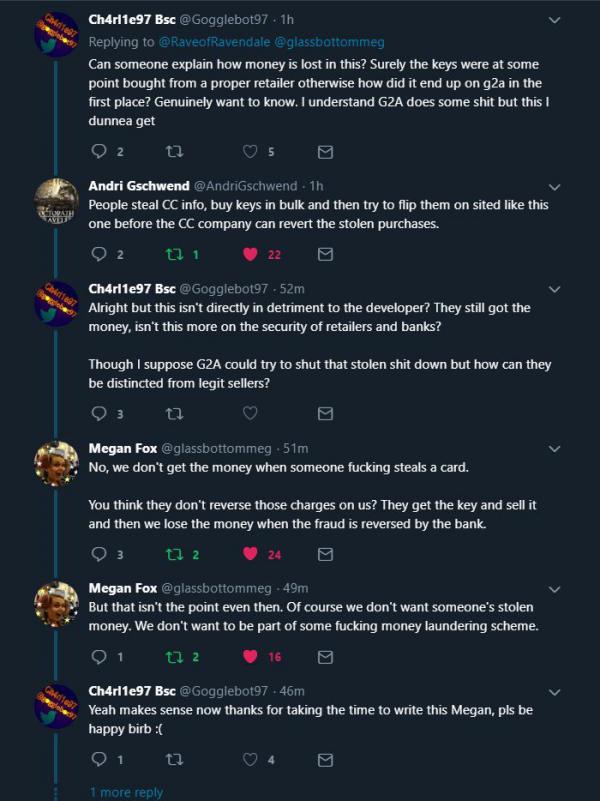 When actual devs are telling you to pirate their games instead of buying it from a dubious re-seller, you know something’s not right. Let’s hope this gets sorted out soon since devs should be earning money for all their hard work, and not just a re-seller.