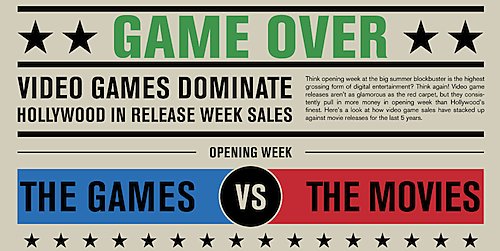 Video games have not been children’s games for years and this has been proven by high values ​​that are driven every year by the market. According to a survey by digital product investment bank Digi-Capital, the gaming industry is expected to generate more than $ 100 billion by 2019, something that was unimaginable some time ago.

This huge growth can be seen compared to the giant Hollywood film industry. Since 2007, the gaming market has a higher income than the cinema. In 2013, it was $ 52 billion compared to $ 50 billion. Also, in 2013, the Grand Theft Auto V game broke the record profit of all who followed, generating $ 1 billion in just three days after it was released.

With excellence in the entertainment scene, games have attracted professionals from other regions to participate directly in the game. The participation of Hollywood actors in the game increasingly appears in the game. Ellen Page and Willen Defoe not only lend their faces to the main characters, they also play a role in the whole process of capturing motion in Beyond: Two Souls. Based on the South Park series, animation creators, Trey Parker and Matt Stone, write game plots and participate directly in directing The Stick of Truth.

The deciding factor for the growth of this industry is the increasing number of players. Vision carried out for children who are left behind, with production often approaching cinematic narratives, with great stories and almost realistic graphics. For many people, games have advantages over movies. In the game, you participate in the story, you are the hero of the journey and you have to face challenges. There is more immersion than just sitting around watching a movie.

Another aspect that makes more people interested in electronic games is easier access to device creations and designs. Graduating in the field of game development, Michael Taylor reports that it’s far more interesting when it’s something you can also follow. “Even as an amateur, anyone can make films, the tool is affordable. Now anyone can make games too, and that makes it far more interesting, “said Udemy online course student.

The popularization was also related to the gaming market for cellphones and tablets, which grew an average of 23.6% per year. This sector has been highlighted by manufacturers, because these devices are increasing. closer to the general population.

The development of digital technology brought many changes, especially in the world gaming industry. New games continue to emerge and some of them have brought what is called Virtual Reality technology. These developments in turn also influenced the online casinos which also relied on interesting games. In the next few years, the number of gaming devices will multiply along with the presence of mobile games and of course this is a market that is not missed by anyone who is serious in the digital industry.