While the Gears 5 technical test (a fancier way of saying beta) was already available since last week for those who pre-ordered the game or was an active Xbox Game Pass member, those with Xbox Live Gold will be able to join the fun starting today with the Gears 5 open tech test weekend!

Gears of War fans can download the Gears 5 tech test client now, but the actual servers will be available later at 10 a.m. PDT (1 p.m. ET), and will run until Monday. First-time players can enlist to the Boot Camp training mode to get a grasp on the basics, and then jump on to Arcade mode to kick some ass. Players will be also be able to try out the fan-fave King of the Hill, and Escalation game modes, and even check out the Tour of Duty progression The Coalition has set up for Gears 5.

Speaking of progression, the devs have added a new reward for tech test gamers that will carry over to the final verson of the game. Called he Wreath Bloodspray, which can be earned by completing one match during the Tech Test from 5:30 – 6:30 pm PDT on Friday, July 26. Check out what it looks like below, 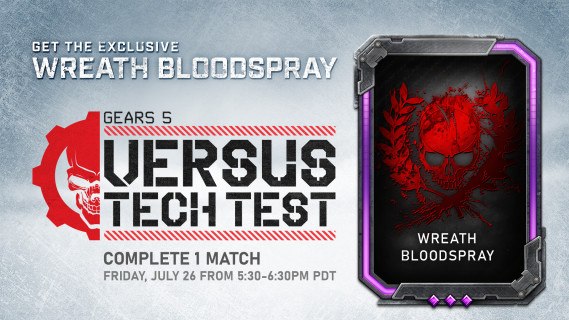 In other Gears 5 news, go read up on how the recoil system has been tweaked by The Coalition. You can also check out the multiplayer classes right here.