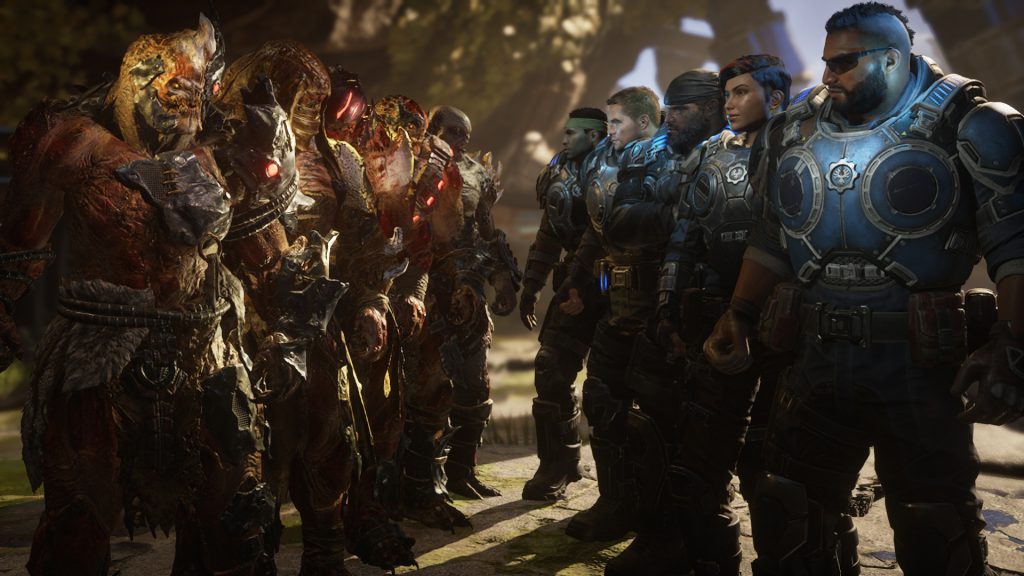 Today the official Gears of War YouTube channel published the Gears 5 beta trailer, revealing that a tech test for one of the game’s multiplayer modes will go live on Friday July 19 2019. Check out the trailer below and read on for more details.

This Friday Xbox Game Pass or Xbox Game Pass Ultimate subscribers, as well as anyone who has pre-ordered Gears 5, will be able to experience Gears 5 Arcade Mode. While no time limit has been set for the tech test yet, it’s likely that Gears 5 Arcade Mode will only be live for a few hours. Arcade is a brand new multiplayer mode for the Gears of War series. Players on each team will choose between one of five heroes and fight to be the first to claim 50 kills and win the match. Much like Overwatch, each hero has a distinct playstyle and abilities which will determine how a player competes.

Players can upgrade the equipment on their heroes at any time, even in the middle of a match, using skulls. Skulls are earned from kills and assists, as well as the Bounties on each hero, and will transfer with the player between matches and hero classes.

Slide cancels have been debuffed in Arcade mode, bringing the focus back to cover-to-cover combat. Additionally, headshots will deal much more damage in Arcade mode than in other Versus modes, forcing players to use the strengths of their chosen hero to their advantage.

The class heroes and associated stats are as follows.

Fast and hard to track, Hunter Class heroes are far more versatile than those in other classes, though their lack of specialisation can be their downfall.

Support Class heroes heal their friends and prime enemies for them to kill by marking them. Pity any enemies who wound but don’t kill these heroes.

The Heavy Class is all about having the biggest guns, and getting stuck into the battle.

The CQB Class is all about getting up close to the enemy and ripping them a new one. Every upgrade brings players close to the action, but they can run and hide quickly if necessary.

Unmoving when shot, Sniper Class heroes are for players who enjoy taking enemies down across great distances.

The Gears 5 Beta trailer also shows a host of interesting gameplay mechanics, including finisher moves and environmental traps for players to use to their advantage. We’ll know more when the Gears 5 Tech Test goes live this Friday.

Keep an eye on MP1ST for the very latest Gears 5 news. If you want to watch some pure Gears 5 multiplayer gameplay, check it out here.