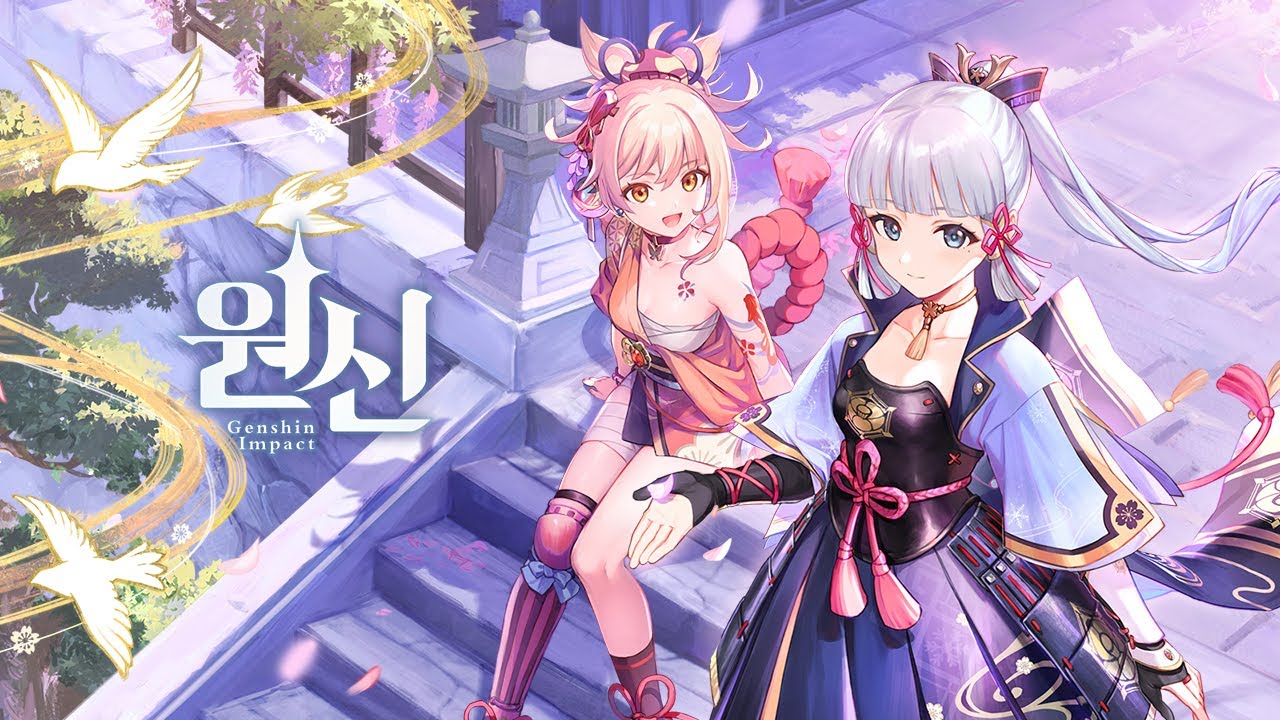 Developer miHoYo has released Genshin Impact update 2.00 which is also known as “The Immovable God and the Eternal Euthymia.” This patch is out now on mobile, PS4 and PS5 (version 2.000). The long list of new content and fixes are listed below.

(60 Primogems for every hour the servers are down. No change to compensation amount if the update is completed early.)

Our developers will distribute compensation to Travelers via in-game mail within 5 hours after the update maintenance is finished. Please log in and claim it before Version 2.0 ends. The mail will expire after 30 days, so don’t forget to claim the attached compensation in time.

◇ New Areas: In Version 2.0, three areas, Narukami Island, Kannazuka, and Yashiori Island in the Inazuma region will be available.

• Adventure Rank 30 or above

• Complete the Archon Quest “Chapter II: Act I – The Immovable God and the Eternal Euthymia”

These miraculous spirits are called Electrograna. They spawn from Thunder Sakura Boughs and grant the protection of Electro.

In addition, Expeditions, Daily Commissions, and other new content will also be added in Inazuma.

Sometimes in Inazuma you will come across Thunder Sakura Boughs, from which you can acquire Electrograna that last for a certain duration.

A kind of impenetrable shield known in Inazuma as a Thunder Barrier.

Some regions in Inazuma are affected by high levels of Electro concentration. While in these regions, you will gradually lose HP. This phenomenon is known as Balethunder.

Use Electrograna to protect yourself against the harmful effects of Balethunder.

This strange entity is known as a Thunder Sphere. It is a common sight in Inazuma. Characters who wield Electro power or who are looked after by Inazuma can use it to move around at lightning speed.

◇ They say that in antediluvian times now lost to history, there was once a foolish ruler who dreamed of building a high garden in honor of the white sacred tree over the primordial sands. Now, dead silence fills the kingdom built on sand, but the obsessions of the past remain.

◇ Sometime in the ancient past, the mountains rose higher than the skies, and the earth was larger than heaven’s dome. But one day, the mirror shattered, and the oceans arose. In these legends, this caused the court of the primeval sakura to become sundered from the other islands.

◇ This court is ever a silent scene of falling red leaves. Perhaps lost causes and unforgettable loves may follow the veins of the earth and coalesce into the fruits of the court’s white tree.

◇ This tengu annex dwelling that floats upon the sea like a lonesome boat once played host to the somewhat famous “Yougou Three,” and this would later become the cage in which they, having despaired, spent the rest of their days.

◇ This magnificent mansion was built by an ancient ascetic warrior in the depths of the earth using scenery borrowed from the outside world. In latter days, a deeply disheartened eccentric would be discovered within.

◇ This estate once belonged to a lieutenant of Orobashi no Mikoto, until he, the body of his god, and the sky alike were rent open by a flash of lightning.

◇ Daughter of the Yashiro Commission’s Kamisato Clan. Dignified and elegant, as well as wise and strong.

Inazuma Shogunate, Yashiro Commission, Kamisato Clan. Widely known as one of the most distinguished clans in all of Inazuma, it is the branch of the Tri-Commission that manages ceremonial and cultural affairs.

Since my parents passed, Brother and I assumed responsibility for all clan matters, big and small.

◇ Owner of Naganohara Fireworks. Known as “Queen of the Summer Festival,” she excels in her craft of creating fireworks that symbolize people’s hopes and dreams.

Fireworks are born out of people’s desire for light and beauty. The earliest mention of fireworks dates back to Liyue during the Archon War. Born from fire and embodied in stone and metal, they have since become an integral part of many festive activities in Teyvat. The Naganohara family has carried on this beautiful human tradition from generation to generation. It is rumored that in addition to the locally-made fireworks, fireworks made by Naganohara Fireworks were also used during Liyue’s Lantern Rite, adding an extra touch of splendor to the festival.

◇ A pint-sized ninja attached to the Shuumatsuban, who always seems to be lacking sleep.

◆ Interact with a Statue of The Seven – Electro to resonate with the Electro element, and use a new Elemental Skill and Elemental Burst.

Adventure Rank 30 or above

Complete the Archon Quest “Autumn Winds, Scarlet Leaves,” and the “Ritou Escape Plan” quest in “Chapter II: Act I – The Immovable God and the Eternal Euthymia”

During the event, complete the “Voyage Prep” quest to unlock Act I: Bolt Blitz.

During the event, Travelers may complete six challenges in total, with three new challenges unlocking each day.

After starting the challenge, Travelers must use Thunder Spheres to move quickly and reach the destination within the time limit.

During the event, complete the “Tracking the Thunder” quest to unlock Act II: Lightning Round.

After starting the challenge, Travelers will need to defeat all opponents within the time limit.

After starting the challenge, Travelers will need to defeat all opponents within the time limit.

Use 1,000 Thunder Pellets and 1,000 Thunder Crystals at the Oceanlord’s Oath to exchange for “Uncrowned Lord of the Ocean” Beidou (Electro). Can only be exchanged for once.

2021/08/16 03:59:00 After the Event Shop closes, any remaining Thunder Pellets or Thunder Crystals in your possession will disappear, so please be sure to exchange them for rewards in time!

Archon Quest “Chapter II: Act I – The Immovable God and the Eternal Euthymia”

◇ Beidou’s Crux Fleet is almost done with their supply and preparation work in Liyue. As promised, the fleet is ready to take you through the thunderstorms to Inazuma.

The Traveler never stops for long. Now is as good a time as any to embrace destiny and set sail for the land engulfed by storm and tempest… The nation of “eternity”!

After the Version 2.0 update, the Unlock Criteria for certain quests will be adjusted as follows:

● The Unlock Criteria for World Quest “Bough Keeper: Dainsleif” will be adjusted to Adventure Rank 28 or above (originally Adventure Rank 36 or above)

*Of which, the level of monsters in Archon Quest Chapter I: Act II will be adjusted to Lv. 30 (originally Lv. 35). The rest of the adjustments made are adjustments to the player’s Adventure Rank for the Quest Unlock Criteria, while other Unlock Criteria and quest rewards remain unchanged.

Kamisato Ayaka’s Story Quest “Grus Nivis Chapter: Act I – The Whispers of the Crane and the White Rabbit”

◇ Elemental creatures who protect themselves from incoming attack with their durable shell.

◇ Samurai who have fallen into banditry.

◇ A Fatui mage from Snezhnaya who can command a Hydro Mirror in battle.

· Once you have charted a course towards your chosen weapon, you will obtain 1 Fate Point upon receiving a 5-star weapon that is not the one that you chose. You can obtain a maximum of 2 Fate Points.

· Once you have accumulated enough Fate Points, your next 5-star weapon will be the one you chose through “Epitomized Path.”

· Your Fate Points will be reset upon obtaining an “Epitomized Path” weapon during this “Epitome Invocation.”

· If you do not choose a weapon, wishes will not accumulate Fate Points.

· You can change or cancel your selection. This will reset your accumulated Fate Points.

· When this “Epitome Invocation” ends, your accumulated Fate Points will also be reset.

Adventurer Handbook – The Commission Quests: Region Selection feature has been added for commissions

New Achievements such as “Mortal Travails: Series II,” “Challenger: Series IV,” “Meetings in Outrealm: Series II,” “A Realm Beyond: Series III,” “Inazuma: The Islands of Thunder and Eternity – Series I,” and additions to the “Wonders of the World” category

Updated the monster lineup on Floors 9 – 12 of the Spiral Abyss.

• A Plasma Field will be generated at the edge of the challenge area once the challenge begins. While within the field, characters will be hit by a lightning strike once every 5s and take Electro DMG. The area covered by the field will gradually expand as the challenge proceeds.

• Pyro DMG dealt by all party members increased by 60%.

• Cryo DMG dealt by all party members increased by 60%.

• Energy Tides are present in this challenge. They will switch between Elemental High Tide and Elemental Low Tide in 10s cycles.

• During High Tide, a large amount of Elemental Particles will be generated when a character’s attack hits opponents, restoring 10 Elemental Energy. This effect can occur once every 2.8s.

• During Low Tide, all characters in the party cannot gain Elemental Energy.

Starting from the first time that the Lunar Phase refreshes after updating to Version 2.0, the three Lunar Phases will be as follows：

When an active character’s Elemental Energy is fully charged, the DEF of opponents hit by the character’s Normal, Charged or Plunging Attacks will be decreased by 7% for 10 seconds. Max 5 stacks. Each stack has an independent duration.

When an active character obtains an Elemental Orb or Elemental Particle, the character will unleash a shockwave that deals DMG to surrounding opponents. This kind of shockwave can be unleashed once every 4s.

After unleashing an Elemental Burst, the ATK of every character in the party will be increased by 20% for 10s. Max 3 stacks. Each stack has an independent duration.

Adds voice lines that will trigger when a character is at low HP.

Adds Japanese voice-over for some characters.

• There are two methods for linking:

Method 1 (Retain Prior Progress From miHoYo Account on Mobile/PC): On the PlayStation platform, using an account for PSN that has never previously logged in to Genshin Impact, open the game for the first time. Follow the steps in the pop-up window to link the email address associated with your miHoYo Account. This will link both accounts.

*IMPORTANT: The pop-up window prompting you to link your accounts only appears when your account for PSN enters the game for the first time, after you agree to the Terms of Service. You can only link an existing miHoYo Account from this pop-up window. There is no other way to link.

Method 2 (Retain Prior Progress From Account for PSN): Log in to Genshin Impact on the PlayStation platform, then go to Settings > Account > User Center > Link Account and link your account for PSN that is logged in to Genshin Impact to an email address that has not already been used to register a miHoYo Account. After linking, your game progress will be shared when you log into your account to play on the same server on iOS/Android/PC/PlayStation.

（For more information, please refer to the HoYoLAB notice, “Notice on Cross-Save Function Between Account for PSN and miHoYo Account”)

Optimizes UI display on mobile devices upon entering Aiming Mode when using touchscreen controls: The “Abandon Challenge” button is hidden and the text transparency of the challenge objectives is reduced.

Adjusts the Waverider’s Stamina mechanism: The Waverider’s stamina is now independent of that of the character’s, and Stamina Regeneration is also calculated separately for each.

Optimizes the expressions of some characters in combat.

Adjusts the description of Ningguang’s Passive Talent “Trove of Marvelous Treasures”: Displays the location of nearby ore veins used in forging on the mini-map.