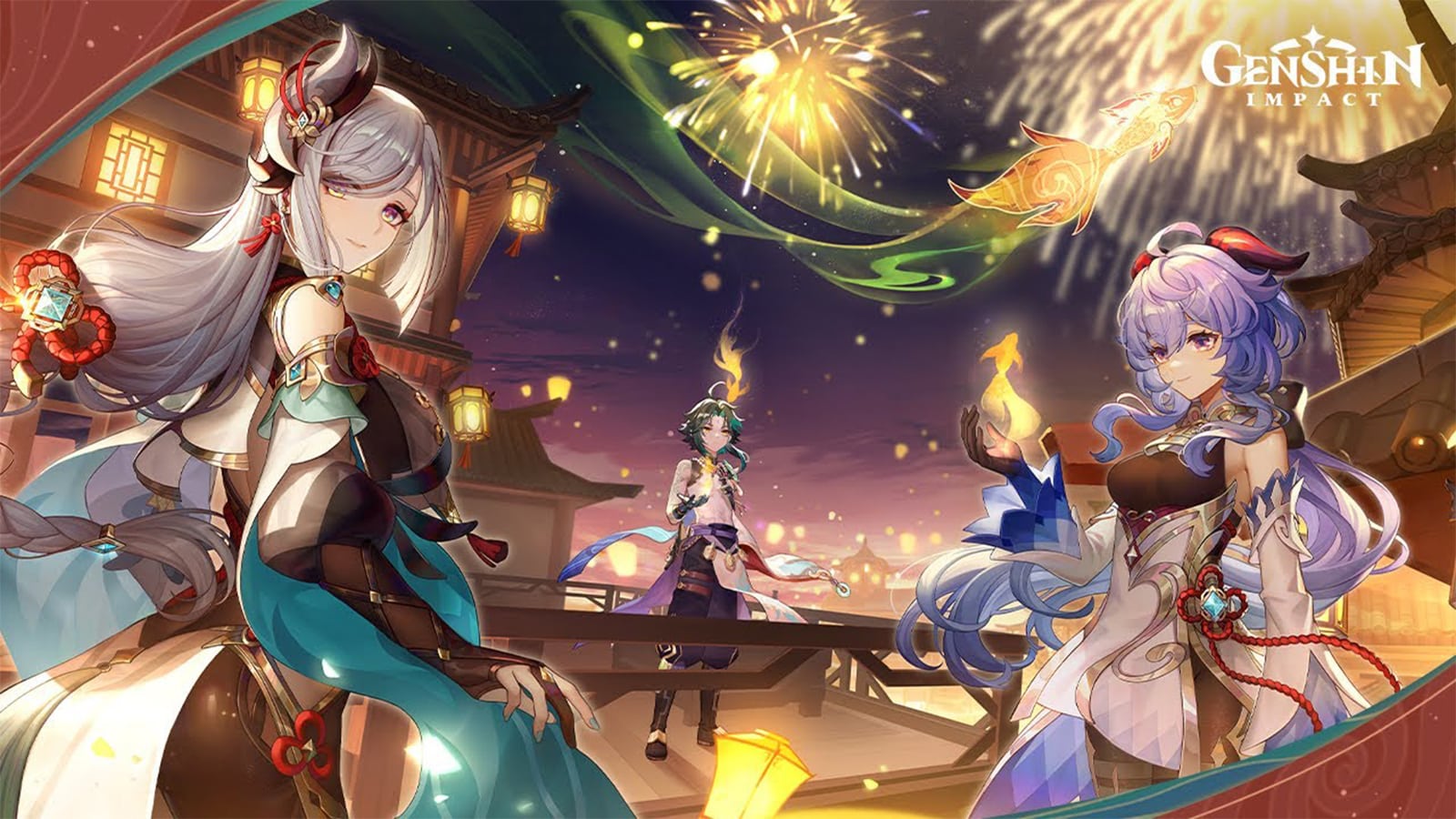 Developer miHoYo has released the Genshin Impact update 2.40 (PS5 version 2.400) this January 4, and this is for the “Fleeting Colors in Flight” update 2.4 patch that includes new content, events, and loads more. Read up on the long list of patch notes below.

〓How to Update Game Client〓
PC: Close the game, open the Genshin Impact Launcher, and click Update.
iOS: Open the App Store and tap Update.
Android: Open the game and follow the directions on-screen.
PS5™ and PS4™: Highlight Genshin Impact from the PS4 Home Screen, press the OPTIONS button and select “Check for Update.”
Please do not hesitate to contact Customer Service if you encounter any issues installing the new version. We will do our very best to resolve the issue.

〓Compensation Details〓
Maintenance Compensation: Primogems ×300
(60 Primogems for every hour the servers are down. No change to compensation amount if the update is completed early.)

〓Scope of Compensation〓
Maintenance Compensation: Travelers who reach Adventure Rank 5 or above before 2022/01/05 06:00 (UTC+8).
Please claim before the end of Version 2.4.
Our developers will distribute compensation to Travelers via in-game mail within 5 hours after the update maintenance is finished. The mail will expire after 30 days, so don’t forget to claim the attached compensation in time.

〓Update Details〓
I. New Characters
5-Star Character “Lonesome Transcendence” Shenhe (Cryo)
◇ Vision: Cryo
◇ Weapon: Polearm
◇ An adepti disciple with a most unusual air about her. Having spent much time cultivating in isolation in Liyue’s mountains, she has become every bit as cool and distant as the adepti themselves.
4-Star Character “Stage Lucida” Yun Jin (Geo)
◇ Vision: Geo
◇ Weapon: Polearm
◇ A renowned Liyue opera singer who is skilled in both playwriting and singing. Her style is one-of-a-kind, exquisite and delicate, much like the person herself.

II. New Area
Enkanomiya
The now-awakened Enkanomiya calls out to a hero. Beneath the still waters lies a new realm.
◇ After the Version 2.4 update, Enkanomiya in the Inazuma region will be available.

“Flowing Lights and Colors” – Lantern Rite Gifts
During the event, log in to the game to receive Fragile Resin, Intertwined Fate, and other rewards!
Each email can be collected until the end of the event.
▌Event Duration
2022/02/09 00:00 until the end of Version 2.4
▌Eligibility
Reach Adventure Rank 2 or above
▌Event Details

“Fleeting Colors in Flight” Event: Take part to obtain Ningguang’s outfit and a 4-star character from Liyue of your choice
During the event, complete all the conditions for “The Moon’s Comely Brow” to obtain Ningguang’s outfit “Orchid’s Evening Gown.” Complete four themed challenge quests to obtain Affluence Talismans, Immaculate Talismans, and Conquest Talismans. You can exchange them at “Prosperous Partnerships” to obtain a 4-star Liyue character of your choice or they can be exchanged at the Event Shop for rewards such as Crown of Insight, Fireworks, or the event-exclusive Lantern Rite Furnishing Blueprints.
▌Event Duration

▌Eligibility
Reach Adventure Rank 28 or above
Complete the Archon Quest “Chapter I: Act III – A New Star Approaches” and Archon Quest Interlude Chapter: Act I – “The Crane Returns on the Wind”

VII. New Enemies
“Primordial Bathysmal Vishap,” “Rimebiter Bathysmal Vishap,” and “Bolteater Bathysmal Vishap”
◇ A predator that lies in wait within the pitch-dark watery depths. It appears to have adapted to some unknown power out in the deep seas such that it can use elements other than Hydro…
“Abyss Lector: Fathomless Flames”
◇ A monster of the Abyss Order who sings of the warmth of the dark flames.
“Cryo Specter,” “Electro Specter,” and “Pyro Specter”
◇ High elemental concentrations have resulted in the creation of this floating creature.
VIII. Other Additions
1. New Recipes: “Dragon Beard Noodles,” “Heartstring Noodles,” “Cloud-Shrouded Jade,” and “Bountiful Year.”
2. New Achievement categories such as “The Light of Day,” and additions to the “Wonders of the World” and “Memories of the Heart” categories.
3. New Namecards: “Travel Notes: Flowing Hues,” “Shenhe: Comb,” “Yun Jin: Rhyme,” and “Inazuma: Tokoyo.”
4. New Furnishings: Leisure Device: “Speedy Rhythm,” “Euphonium Unbound: Soaring,” “Euphonium Unbound: Winding,” and more.
5. New feature in Serenitea Pot for creating sets. Travelers can create and customize their own sets, add or remove Furnishings from those sets, and move and rotate them together as one.
Note: Custom sets will not be saved to the Sets tab. The set will be canceled after all the Furnishings within it are stored.
6. New Wildlife: Deep Sea Unagi (Capturable) and Floating Ray.
7. New Fishes: Divda Ray and Formalo Ray.
8. The Sacred Sakura’s Favor level has been increased to 50. After the Sacred Sakura’s Favor level reaches its maximum, Electro Sigils can be exchanged at Netsuke no Gen Crafts Shop.
9. New display of consumable materials for Weapon Enhancement Materials on the Forging page.
10. New Mail Box function: some important mail such as birthday wishes will be automatically transferred into the Gift Mail Box after you have collected the rewards.
Mail within this Box will not expire over time.
11. New shortcut wheel customization function. You can customize the shortcut wheel’s system function access on “Settings > Controls” (This feature will be available after you reach Adventure Rank 20 or higher).
12. New controller compatibility function: press R3 to display a list of tracked objectives.
13. Adds some prompts for loading screens.
14. After completing the Story Quest “Lupus Minor Chapter: Act I,” Rifthound Whelps will appear in Mondstadt’s Wolvendom and its vicinity.
15. Spiral Abyss
Updated the monster lineup on Floors 11 – 12 of the Spiral Abyss.
Floor 11 Ley Line Disorders changed to:
• All party members’ Normal Attack DMG increased by 50%.
Floor 12 Ley Line Disorders changed to:
• Certain opponents in this challenge possess the Honed Spirit effect, which grants them 10% Physical and All Elemental RES. When opponents with Honed Spirit take hits from attacks that are considered Normal Attack DMG, they will lose 3% Physical and All Elemental RES. A maximum of 30% of each may be lost this way. The RES lost this way will be reset every 20s.
Starting from the first time that the Lunar Phase refreshes after updating to Version 2.4, the three Lunar Phases will be as follows：
Phase I:
Blade-Flourish Moon
When the active character’s Normal, Charged, or Plunging Attacks hit opponents multiple times within 2s, that character’s Normal, Charged, and Plunging Attack DMG is increased by 5% for 8s. Max 15 stacks. This effect can be triggered once every 0.1s and will be cleared if the character goes down or leaves the field.
Phase II:
Blooming Moon
When the active character hits opponents with attacks that are considered Normal Attack DMG, there is a 50% chance of unleashing a shockwave at the hit opponent’s position, dealing AoE True DMG. One shockwave can be released in this way every 0.3s.
Phase III:
Awakening Moon
When the active character’s Normal, Charged, or Plunging Attacks hit opponents multiple times within 2s, the character gains a stack of Emergence for 8s. This effect can be triggered once every 0.1s. Emergence will be cleared when the character goes down or leaves the field. When the character gains 15 Emergence stacks, the stacks will be cleared and a shockwave will be unleashed that deals True DMG to nearby opponents. After a shockwave is unleashed in this way, all party members will deal 25% increased DMG for 10s.
Other Adjustments:
(a). Adjusts the height of the central stage disc in all levels on Floors 9 – 12 of the Spiral Abyss.
(b). You can view enemy details on the Party Setup page while continuing your way through the Spiral Abyss.
(c). When challenging the Spiral Abyss, if there is an Abyssal Star that has not been obtained, the hint text on the left will be grayed out.

New Narrative Director for Battlefield Planning to Fix BF2042; Says Willingness There, But Not Easy