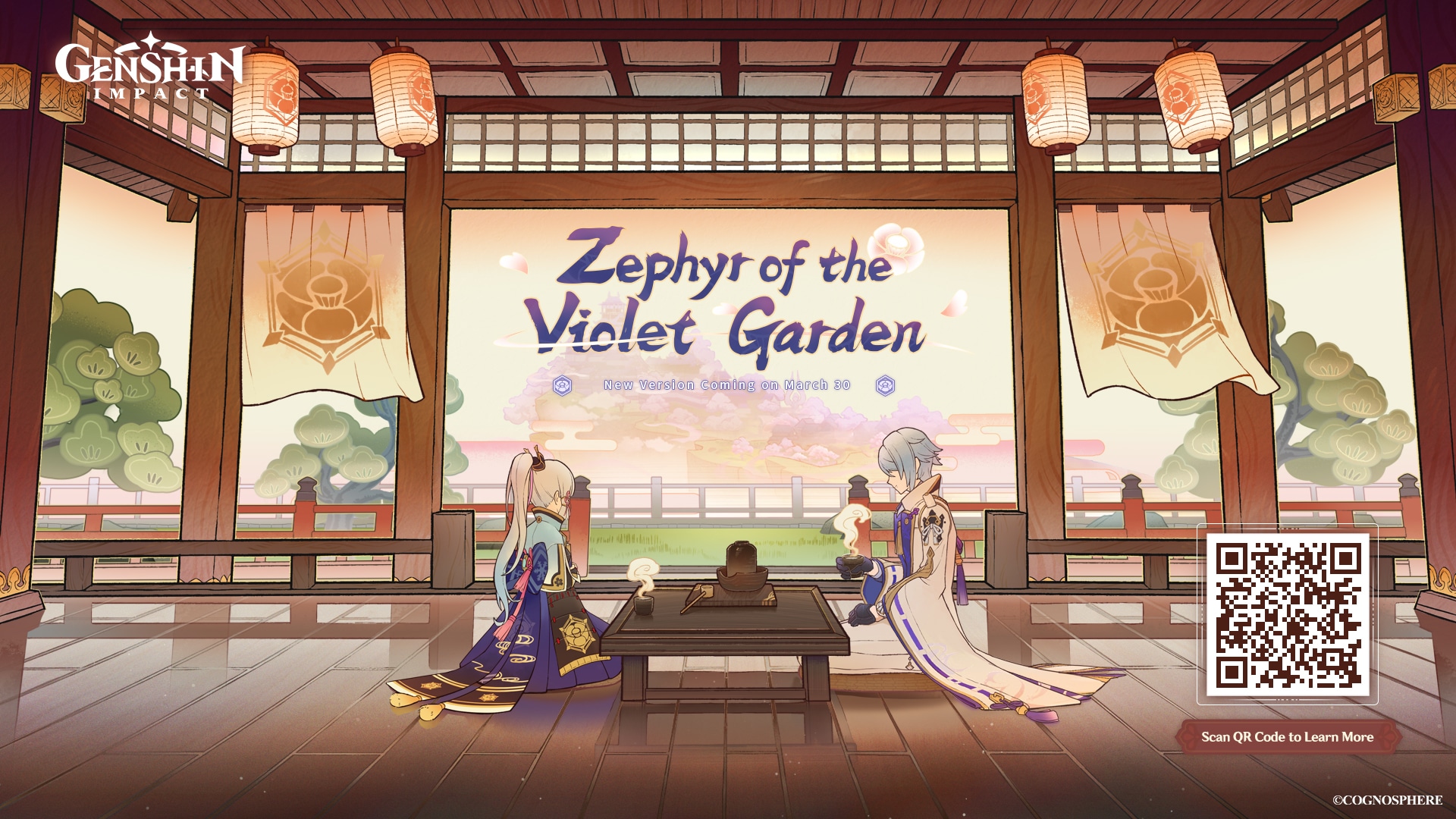 Developer miHoYo has released the Genshin Impact update 2.60 (PS5 version 2.600), which is the big 2.6 patch otherwise known as “Zephyr of the Violet Garden.” Adventurers will see a new area become available in The Chasm, and there’s a new character out as well in Kamisato Ayato (check out who voices the character here). Read on for the full Genshin Impact March 29 patch notes.

〓How to Update Game Client〓
PC: Close the game, open the Genshin Impact Launcher, and click Update.
iOS: Open the App Store and tap Update.
Android: Open the game and follow the directions on-screen.
PS5™ and PS4™: Highlight Genshin Impact from the Home Screen, press the OPTIONS button and select “Check for Update.”
Please do not hesitate to contact Customer Service if you encounter any issues installing the new version. We will do our very best to resolve the issue.

〓Update Details〓
I. New Area – “The Chasm”
◇ After the Version 2.6 update, a new area, The Chasm, will be available in Liyue.
Reach Adventure Rank 28 and complete the Archon Quest “A New Star Approaches” and the World Quest “Surreptitious Seven-Star Seal Sundering” to unlock the underground mines.

II. New Character
5-Star Character “Pillar of Fortitude” Kamisato Ayato (Hydro)
◇ Vision: Hydro
◇ Weapon: Sword
◇ The young but highly accomplished head of the Yashiro Commission’s Kamisato Clan. Cultured and polite, he is a man of many ways and means.
Kamisato Ayato’s Elemental Skill “Kamisato Art: Kyouka” creates flash-step movements, leaving behind a watery illusion at his original location, and he then enters the Takimeguri Kanka state. After it is formed, the watery illusion will explode if opponents are nearby or after its duration ends, dealing AoE Hydro DMG. In the Takimeguri Kanka state, Ayato will use his Shunsuiken to engage in blindingly fast attacks, causing DMG from his Normal Attacks to be converted to AoE Hydro DMG. This cannot be overridden.
His Elemental Burst “Kamisato Art: Suiyuu” unveils a garden of purity that silences the cacophony within. While this space exists, Bloomwater Blades will constantly rain down and attack opponents within its AoE, dealing Hydro DMG and increasing the Normal Attack DMG of characters within.

III. New Domain
The Lost Valley
The ancient ritual grounds were buried beneath the earth amidst a cataclysm that tore heaven and earth asunder before being uplifted by the descent of an alien object, and finally unveiled by a destructive battle that resulted from a betrayal. Nonetheless, those who once frequented this place are no more.
◇ Unlock Criteria:
• Reach Adventure Rank 22 or above
• Complete the Archon Quest “Prologue: Act III – Song of the Dragon and Freedom”
• And fulfill certain criteria
◆ Challenge the Domain to obtain artifacts in the “Vermillion Hereafter” and “Echoes of an Offering” sets.
Located at The Chasm.

V. New Events
“Hues of the Violet Garden” event: Take part to invite “Juvenile Galant” Xingqiu (Hydro)
During the event, you will receive quests to help organize the Irodori Festival. As the festival progresses, four gameplay modes will be unlocked in sequence: “The Moon and Stars Inscribe,” “Theater Mechanicus,” “Clash of Lone Blades,” and “The Floral Courtyard.” Participate and complete the corresponding criteria to obtain event-exclusive Furnishings, exclusive recipes, Primogems, Crown of Insight, Talent Level-Up Materials, and more. Complete all the criteria in “Friendship in Writing” to invite “Juvenile Galant” Xingqiu (Hydro).

VII. New Enemies
Ruin Serpent
◇ An ancient, bizarrely-shaped autonomous machine.
It will create Oozing Concretions in battle and will attempt to draw power from them under certain circumstances, which will allow it to unleash devastating attacks. Use the Blooming Light from your Lumenstone Adjuvant to destroy the Oozing Concretions feeding power to the Ruin Serpent to knock it out of this state and cause the energy cores on its body to cease functioning.
Located at The Chasm
Black Serpent Knight: Windcutter
◇ A guard of some standing in the court.
When their attacks hit a character defended by shields, they will obtain buffs at the cost of its HP.
Floating Hydro Fungus
◇ A spore organism of some intelligence. It possesses extreme adaptability.
Development Items dropped by “Floating Hydro Fungus” will also be added to “Shop > Paimon’s Bargains” in future Versions.

VIII. Other Additions
1. New Recipes:
○ Kamisato Ayato’s specialty: “Quiet Elegance”
○ Inazuman Food Stall: Katsu Sandwich
○ Obtain “Rainbow Aster” from the “Hues of the Violet Garden” event
2. New Achievement categories such as “Challenger: Series V,” and “Chasmlighter” and new Achievements added to the “Wonders of the World” category.
3. New Namecards:
“Kamisato Ayato: Ripple”: Reward for reaching Friendship Lv. 10 with Kamisato Ayato
“Lumens: Stone of Light:” Reward for enhancing the Lumenstone Adjuvant to Lv. 10
“Achievement: Thunderclap:” Reward for completing all achievements under “Challenger: Series V”
“Achievement: Chasm:” Reward for completing all achievements under “Chasmlighter”
“Travel Notes: Irodori”: Reward obtained via the BP system
4. New Furnishing: Leisure Device: Maximum Motivation
Tubby created this furniture combination with great care out of a Practice Plaque and multiple Practice Stakes. The Practice Stakes can be placed anywhere within a limited area and will persist once placed. You can initiate the Practice Challenge at any time. If you can destroy all the wooden stakes in 2s, the challenge will be considered a success. Interact with the Practice Plaque to check your records.
5. The “Adjust Brightness” function has been added to Settings > Graphics.
6. “Radiant Spincrystals” have been added to Mondstadt, Liyue, and Inazuma. After obtaining them, you can unlock the corresponding Realm Music using “Euphonium Unbound.”
7. The Teapot Traveling Salesman has added some “Radiant Spincrystals” which can be purchased after obtaining and completing the corresponding World Quests in Inazuma.
8. After completing Raiden Shogun’s Story Quest “Imperatrix Umbrosa Chapter: Act II,” Ritou will add a shop where you can purchase “Sango Pearls,” “Unagi Meat,” and 2-Star “Lucky Dog” Artifacts.
9. New Living Beings: Lucklight Fly (Capturable), and Bluethunder Weasel (Capturable)
10. New Harvestable Resource: Starshroom
11. The redirect link to the “Adventurer Handbook: Bosses” screen has been added under the “Sources” for certain Development Items.
The Development Items dropped by “Floating Hydro Fungus” will also include a redirect link to the “Adventurer Handbook” in future versions.
12. Adds a shortcut for opening the Party Setup Screen on mobile platforms: on the main interface, tap and hold the avatar of any character to quickly access the Party Setup Screen.
13. Adds some prompts for loading screens.
14. New Loot Drops from “Abyss Heralds,” and “Abyss Lectors”: “Gloomy Statuette,” “Dark Statuette,” and “Deathly Statuette.”
15. Spiral Abyss
Floor 11 Ley Line Disorders changed to:
• All characters in the party gain a 75% Anemo DMG Bonus.
Updated the monster lineup on Floors 11 – 12 of the Spiral Abyss.
Starting from the first time that the Lunar Phase refreshes after updating to Version 2.6, the three Lunar Phases will be as follows:
Phase I:
Sheet-Ice Moon
After a character’s Normal Attack hits an opponent, this opponent will be afflicted with a Mark of Ending. After 10s, this Mark of Ending will be removed, dealing True DMG to this opponent. When a character’s Normal Attack hits an opponent with a Mark of Ending, the DMG dealt by the Mark of Ending’s removal will be increased. This DMG can be increased 9 times.
Phase II:
Snap-Rain Moon
After a character’s Normal Attacks hit opponents, the DMG dealt by this character’s Normal Attacks will increase by 12% for 5s. This effect can stack up to 5 times. Each stack is calculated independently. This effect can be triggered once every 0.1s.
Phase III:
Iris Moon
After a character’s Normal Attack deals DMG to an opponent, the Physical/Elemental RES of this opponent will decrease by 6% for 5s, matching the type of DMG dealt. This can stack up to 7 times. RES decreases of different types can co-exist, and their stacks and timers will be independent of each other.

〓Adjustments & Optimizations〓
● Enemies
1. Lowers the DMG done by “Geovishap Hatchlings” when their tail sweep skill hits a character continuously.
2. Optimizes the appearance of the “Primo Geovishap” in the “Living Beings” section of the Archive.
● System
1. Optimizes the Ornamental Fish icon.
2. Optimizes UI presentation and text of content that has yet to be unlocked in Hangout Events.
3. When below Adventure Rank 30, the “Tutorials” icon will be permanently displayed on the main interface.
4. Adds “Recently Unlocked” to “Tutorials.” Five newly unlocked tutorials will be stored for easy access.
5. “Tutorials” will record the position where you last have read. If there is no unread tutorial, the last read tutorial will be selected.
6. Adjusts the position of the Tutorials button in “Living Beings.”
7. Optimizes the sorting logic for Weapon Enhancement Materials and Artifact Enhancement Materials: these two materials are still placed at the bottom of their respective categories, but their internal sorting will be affected when sorting by quality.
● Audio
1. Optimizes the volume of music in the Serenitea Pot.
2. Optimizes the Japanese, Korean, and English voice-over for certain characters and quests.
3. Adds Alternate Outfits voice lines for the characters Jean, Amber, Rosaria, and Mona; Travelers can change the outfits in “Character > Outfit” to play the relevant voice lines.
● Other
1. The text of the “Exit Download” button in the login screen has been changed to “Stop Download,” and the text description of the related function was optimized.
2. For animation cutscenes from Version 2.6 and earlier, Jean, Amber, Rosaria, and Mona’s appearances have been adjusted to the Alternate Outfits.
3. Optimizes the effects of the cutscene animation in the Archon Quest “A Long Shot.”
4. Optimizes some display animation details of the character Kaeya in the Character > Weapon interface.
5. Batch optimizes the logic related to the enemy homing function for 15 characters and 4 large-sized enemies: Golden Wolflord, Stormterror, Ruin Serpent, (new enemy in Version 2.6), and Bathysmal Vishap Herd.
6. After the Spiral Abyss resets on April 1, the “Gladiator’s Finale” and “Wanderer’s Troupe” Artifact set rewards in “Domain Reliquary: Tier I,” and “Domain Reliquary: Tier II” for Floors 9-12 will be replaced with “Vermillion Hereafter” and “Echoes of an Offering.”
7. Optimizes the sensitivity of the controller in the Hangout Events interface.
8. Optimizes the display of certain messages on the interface when using a controller: hides messages that are not part of the current operation interface.
9. When using a controller, you can quickly activate certain functions of the shortcut wheel by pressing key combinations.
10. Adjusts the height of the central stage disc in some Domains.
11. Adjusts the text description of Achievement category “Liyue: The Harbor of Stone and Contracts.” Progress in exploring Liyue’s The Chasm area will be counted separately in the “Chasmlighter” Achievement category.