First off, it’s a standalone beta, and will be free for everyone, though it will require a PlayStation Plus membership for PS4 gamers, which I assume will be the case for Xbox One players too (the beta requiring Xbox Live Gold).

Assault: Assault classes are frontline attackers, boasting abilities that promote aggressive gameplay. They can engage the enemy effectively from medium to long range, and their main goal is hunting them down and securing areas. Either “guns-blazing” or stealthy approaches are viable Assault class strategies.

Support: Equipped with drones, the Support classes provide teammates with intel on enemy position and movement. They are equipped for medium- to short-range combat, so a more cautious approach is recommended. They can provide cover fire or keep an eye out for flanking enemies.

Marksman: While some classes in this category are more versatile in terms of combat tactics, marksmen focus on long-range combat and enemy suppression. High ground or spots with a clear view over the battlefield give marksmen an advantage over other classes. Most of them are at a disadvantage at short range, so they should stay in cover while maneuvering to strategic positions. 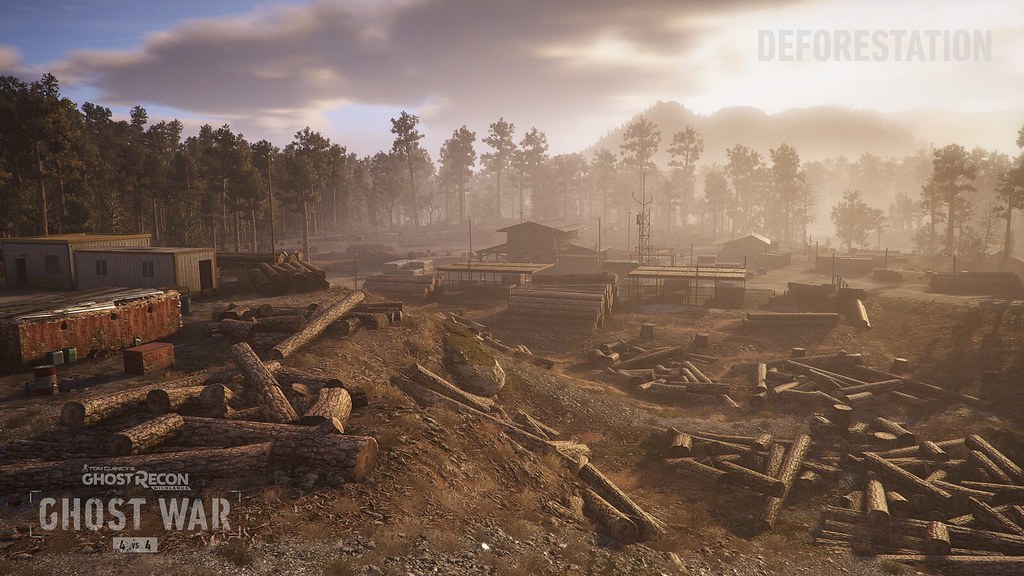 Fighting at a sawmill means that trees are going to be your primary source of cover, whether it’s the piles of logs in the open central area or the dense tree stands that circle the perimeter. The north and south spawn points (marked by the arrows) both offer access to flanking routes and sniper positions, and the asymmetrical design of the map makes it even more crucial to know the lay of the land. For example, marksmen from the southern spawn might swing around to the west to set up shop amidst the trees (the large green circle pictured below), but they’ll have to be conscious that marksmen from the northern spawn have a shorter, more direct route to a tree-lined ridge (the wide green oval) and might be scouting for their approach. 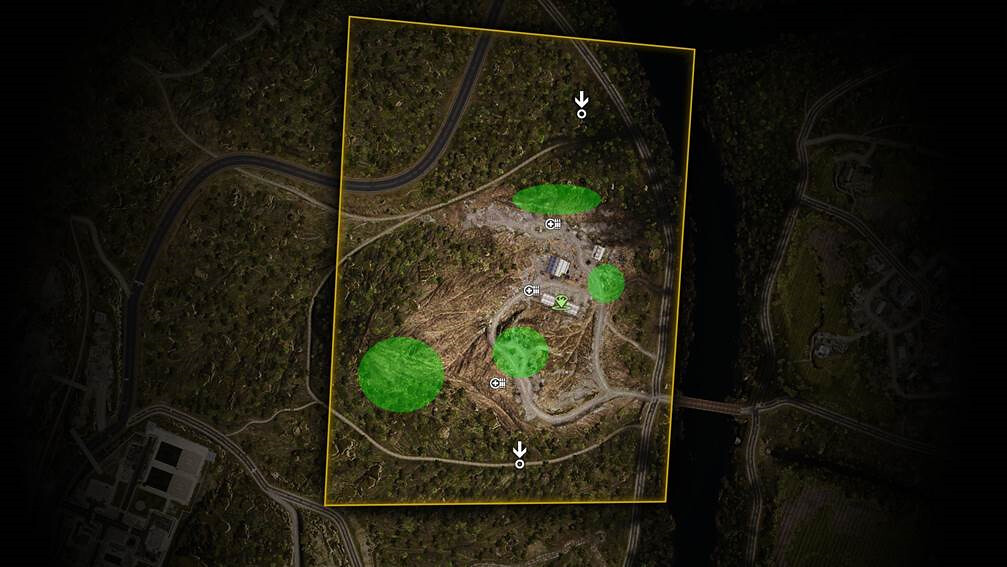 If you stray too far from your teammates in hopes of getting the perfect shot, it may be difficult for them to revive you if you are downed. Revives are a powerful way to reclaim the advantage in the no-respawn matches of Ghost War, so consider positioning support players in the two smaller green circles where they can quickly reposition for a revive if needed. These circles also provide strong positions from which to spot the enemy’s advances and root out counter-snipers with your surveillance drone, as well as providing good sight lines for suppressing fire.

Suppression really does a number on enemies in Ghost War and can be crucial for supporting a flanking run. The roads are the fastest routes, but minimal cover makes them risky. If you can suppress an enemy position while your assault teammate makes a run, you can shift the battlefield in your favor. Just be sure to lay any traps you have in nearby doorways or near obvious cover emplacements, because your enemies will be trying to outflank you as well. 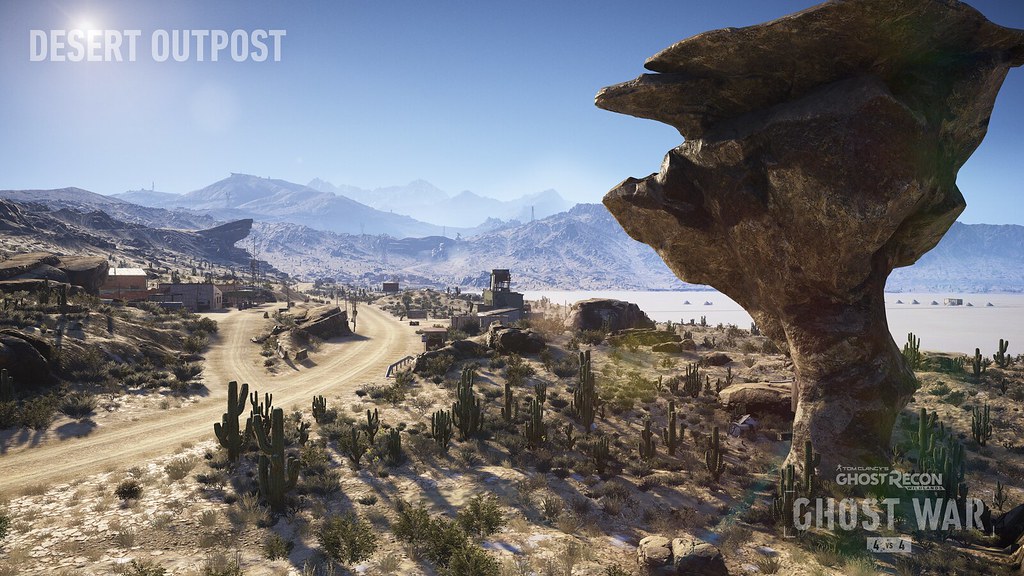 The rocky scrubland of Desert is a bit stingy with natural cover, so players will have to take advantage of rocks and small terrain height variation to remain undetected. If an enemy drone is airborne, it’s best to move as little as possible, and even better to be near some of the larger rocks or shrubbery. Drones operate on a cooldown timer, so once it goes away, that’s your chance to move up. The two southernmost green zones indicate rocky areas where players moving up from the southern spawn point through the open terrain can seek cover. 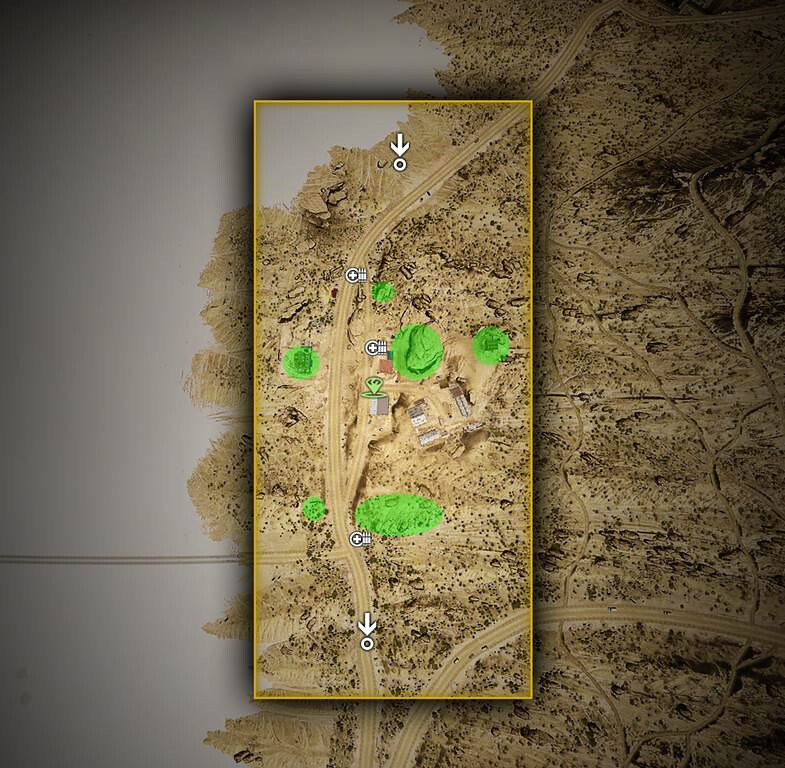 Standing tall on either side of the map are two sniper towers indicated by the two similar green circles on the east and west sides of the map. The western tower is the more exposed of the two, so the trick here is to stay at the bottom of the tower and shoot from behind the supports. This is the more exposed of the two towers, so don’t hesitate to take cover in the nearby diner if an enemy identifies your position. Climbing up to the eastern tower is risky as well, given the long sight lines to the southern spawn. Get there fast and then lay traps in case an enemy is bold enough to climb up after you.

If you spawn in the south, you can get quicker access to the closer of buildings which can be a great place to work a support/assault duo. From the northern spawn, you can speedily reach the large rock indicated by the large central green circle, which provides great visibility for calling out enemy positions to your teammates. The smaller circle just to the north provides a more sheltered view if enemy marksmen already have the big rock sighted in. As the fight wears on, visiting one of the restock points indicated by the health/ammo icons can give you a crucial boost, but you’ll want to have a teammate covering you because the enemy is sure to be watching.

Once we get our grubby hands on the beta, we’ll get our impressions up on the site.

Call of Duty: Black Ops 3 Double Cryptokeys in Free for All Starts Today