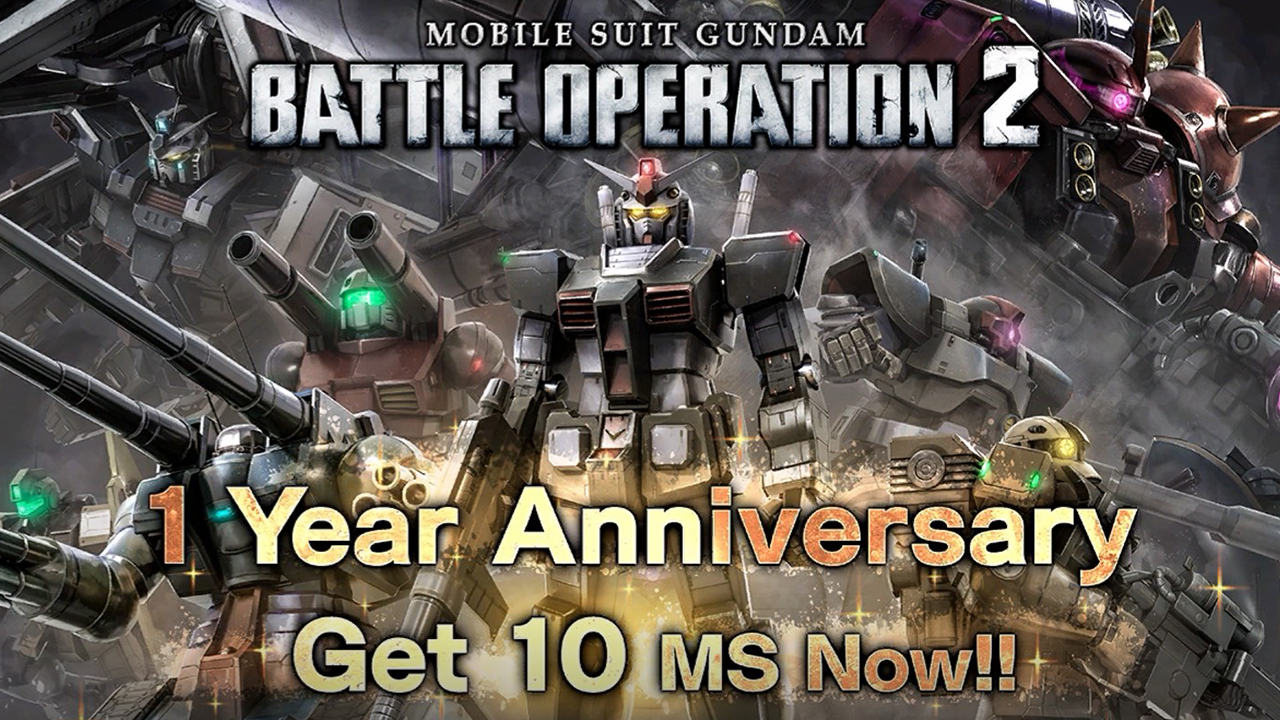 Gundam Battle Operation 2 is celebrating its one year anniversary in a big way as the recent update has released, bringing in a ton of free gifts and content.

The anniversary update (1.14) weights roughly 1.2GB and comes pack with a bunch of freebies. The event will run from now, until August 29th and will allow players the opportunity to complete in limited missions, and earn clan bonuses along with other content that you can read up below. Gundam Battle Operation 2 is a free-to-play sequel to the first, available exclusively on PS4. As of right now the game is currently only available in Japan, but it does offer an English translation in the game settings. The game is slated to release later this year in the US and Europe, though no exact date has been announced

First order of freebies is the 39 free tokens you get for logging in during the anniversary. These tokens can be used at the lottery station in exchange for a chance at a randomized Unit, character suit piece, or unit weapons/upgrades, though we suggest you take advantage of the current step event, which improves your chances of obtaining certain banner suits and is also currently at a 50% discount for the first step (15 tokens rather than 30). With the anniversary event the first step also has a 72 hours bonus boost which guarantees one of the currently featured banner units. Do be careful and make sure you use those tokens on the right lottery, as I made the mistake in wasting 30 tokens on the regular 10 roll lottery.  And speaking of 10 rolls, for the next 5 weeks the game is giving out 1 ten roll a week for absolutely free!

Now moving on to the other content found in this anniversary update, upon logging on you’ll also be given the following units for free. If you’ve had them prior to this event they’ll be converted over into recycle and mechanic tickets, which you can spend at their respective shops.

Active clans during this period have the opportunity to receive up to 5 times the leveling rewards, which once they’ve reached a certain level or completed certain missions they’ll also earn some credits(10K is now 50K) along with more tokens (1 Token is now 5 Tokens).

Some new limited missions are available, which you can find below along with their rewards. Information for rewards were gathered from the official website, with the challenges details gather from in-game.

For the level 1 version all you have to do is sortie into 40 battles, while the level 2 requires you to complete all limited missions.

A new matchmaking playlist called “Weekend Battle” is now live. These weekend battle will run every week from Friday until Sunday and will feature two new game modes, which you can read up below. Information taken from the official weekend battle page and in-game

Similar to the Mode “ACE”, Shuffle Target selects a random player from both team to be the targeted suit. Each team must defend their own while going after the other, and after a certain amount of time the target will swap to a different player, something that doesn’t happen in ACE mode. Destroying the target will grant that team 3 times the score that they would normally get for killing that cost unit. NO details on whether a target destroying an enemy also multiples the score like it does in ACE mode.

Down below you’ll find other related fixes and features that came with this patch, do mind that the translation is grabbed from the official patch page and isn’t 100% correctly translated due to google translate.

Types of game modes for rating that can be selected have decreased, and players in Block list are now colored different. Blue meaning you, white is a normal player and red for the blocked player

Added 30 BGM songs to be played during battle .

Destiny 2 Iron Banner Tips and Tricks for This Week