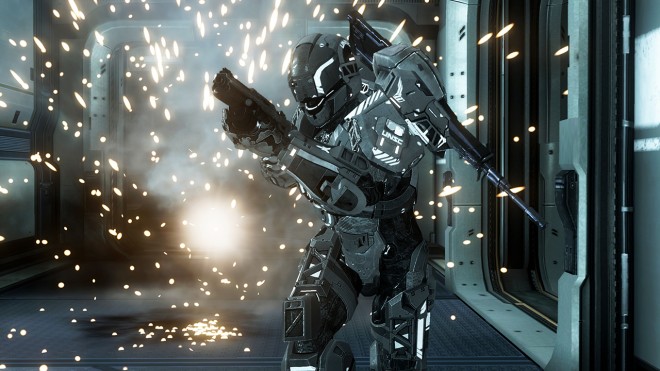 As previously stated, 343i are looking to tweak primaries in oder to provide a more balanced Halo 4 sandbox experience. In this week’s Halo bulletin, 343 developer “Bravo” goes through some of the specifics.

Before reading, he mentions that all of these changes are “nowhere near final, adding that the team is “anticipate going through several waves of iteration and even more waves of testing before landing on our final design.”

He writes that these weekly updates are simply meant to inform the fans of what the team is working on so that they might provide feedback throughout the entire process, rather than after the weapon changes are said and done and already implemented in the game.

“As you may have guessed, the first area that we felt the need to tackle was primary weapons, specifically the precision rifles,” he continues.

Bravo detailed a few schools of thought with regards to rifle balance. One suggests that the DMR’s power should be reduced while the other suggests weapons should be tuned up to match its power. “Both things being said, there can be a middle ground.” He says. “Looking at the DMR, we currently feel that the kill time should remain unchanged, as the weapon has become a clear favorite amongst the community due to its reliability and consistency. So tuning the Battle Rifle, LightRifle and Carbine against this weapon presented quite a challenge. Here are the tweaks that have currently been made, and the challenges associated with each.”

Check out what sort of more specific tweaks the team currently has in store for weapons like the Battle Rifle, LightRifle and Carbine.

Right now, we feel that the mid-range role of this weapon is undermined by the strength of the DMR. To combat this, we are looking at decreasing the kill time for the Battle Rifle through various tweaks. This means testing a “4-shot BR” (currently, the Battle Rifle takes 5 bursts to kill) with a reduced rate of fire, though these changes are not final.

At this time, we have adjusted the range at which the reticle turns red to match the DMR.

The Carbine has been adjusted to take one less shot to kill, bringing it to a 7-shot kill. This change was applied because we felt that players who used this weapon and took the time to become skilled with it were not rewarded due to the weapon’s kill time.

Bravo writes that the above changes, if implemented, would speed up the kill time of these weapons, thus increasing the overal pace of Halo 4’s competitive War Games experience. Also, as a result of these tweaks, the automatic weapons like the “Assault Rifle, Suppressor and Storm Rifle have all received a slight damage buff along with an auto-aim decrease that requires players to be more accurate than they would have previously.”

Bravo closes by saying, “This is not the extent of our tuning, and we are actively investigating tweaks to additional weapons, such as an aim-assist decrease on the Beam Rifle.”

What are your thoughts so far on these decisions? Agree? Disagree?

Also, look forward to some Regicide and Grifball playlist updates incoming this Monday.

Featured image courtesy of I ELEC I TRIX I