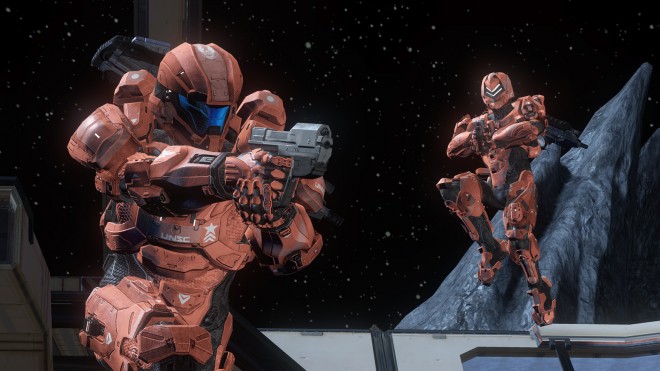 This Monday, February 4, Team doubles will be making its way to Halo 4, along with a few other Capture the Flag updates and new Specialization unlocks.

First and foremost, the Community Forge Test playlist will be taking a break next week, but will return at a later date. Those looking forward to the recently detailed competitive playlist will be happy to know that it has now been officially named. Though further details are still forthcoming, “Team Throwdown” will be the title of this particular playlist. If you haven’t yet, check out the initial details for Team Throwdown here.

Descriptions as seen on the Halo Bulletin:

The Infinity Slayer experience in 2 vs 2 form. In this variant, players have the option to choose their custom loadout, and instant respawn and radar are enabled. Personal ordnance will kick in at the traditional 70 point mark, but the options are tweaked specifically for Team Doubles. Games are played up to 300 points.

An experience that features preset game loadouts. The score limit is the same as above, but radar, personal ordnance and instant respawn are disabled. Here are the loadouts that will be featured:

The ever-popular Capture the Flag game type, customized for 2 vs 2 play. Custom loadouts and radar are enabled, and respawn time is set to 10 seconds. Flag settings provide an optimal experience for small maps and teams: 5 flags to win, 3 second return, and 15 second reset. Lastly, your flag does not have to be home to score.

As for the non-Doubles CTF playlist, new maps will be added (Relay and Exile) while the flag reset time on Adrift, Abandon, Solace and Relay will be dropped to 15 seconds. This is to account for the smaller map sizes. Those looking to get their CTF fix more often will be happe to know that Infinity CTF will now be added as a voting option when matchmaking. This variant will allow players to call in personal ordinance, something that should hopefully add variety to the game play.

As for specializations, this week’s unlocks include Rogue and Tracker.

Spartan optimization for single-operative missions which require a lone Spartan to be deployed on their own for incredibly long durations of time, even years if required. The Stability armor mod allows users to increase their aiming stability when being fired upon.

Spartan optimization for long-range target tracking (trans-continent and off-world), particularly in scenarios where conventional tracking has failed or such a substantial time has passed that the trail has gone cold. The Requisition armor mod allows users the ability to recall their own ordnance requests in order to acquire more helpful weapons in the field.

That about does it for next week’s Halo 4 playlist updates. Are you looking forward to more Capture the Flag?