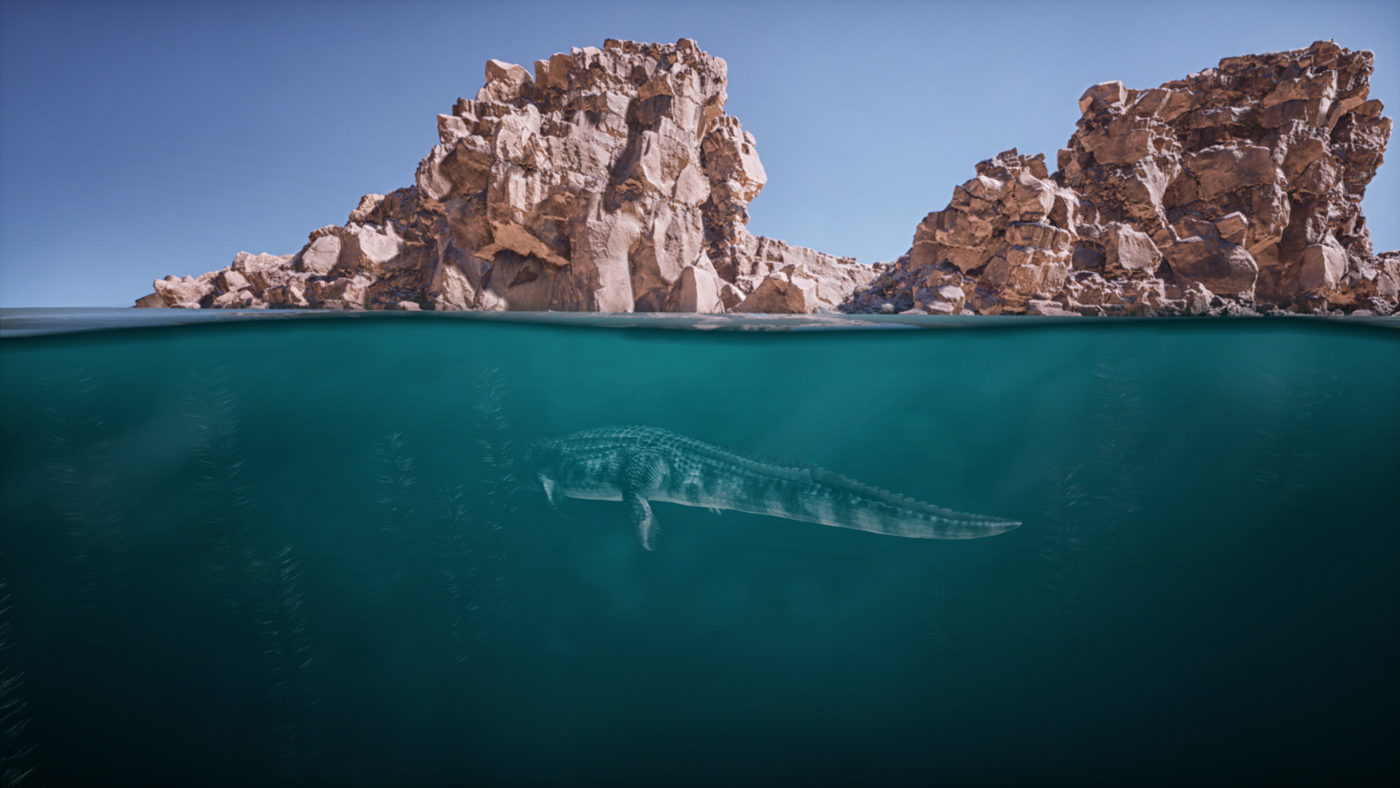 While there’s no drought of horror games in the video game market, the same can’t be said for games focused on dinosaurs. Thankfully, that’s about to change soon with Hashbane Interactive’s “Instinction” which is set to roar its way onto the PS4, PS5, Xbox One, Xbox Series X, and PC this 2022.

Hashbane took time out of its busy schedule to answer some early questions from us about the game. Keep in mind, the gameplay reveal hasn’t dropped yet, so our questions couldn’t really bite into the specifics about it. That said, we did ask about the studio’s thoughts on Capcom’s Dino Crisis, which is the team’s inspiration, and whole lot more.

MP1st: Why do you think no one has truly committed to the Dinosaur genre? I mean, we have games like Ark Survival Evolved and Second Extinction, but those are so heavily focused on the multiplayer side of things, it’s not exactly what dino fans are craving for, yet it’s one they keep getting.Is there some sort of hesitation to making one story driven? The genre used to be so popular. What happened?

Jade: It may not be the dinosaur genre per se, but more hesitation with a comparison to Dino Crisis or the backlash that comes with it. ARK in particular, as a dinosaur game has a huge following, and it has its place, as Does Path of Titans or Jurassic Park, we could go on. The only consistent common denominator is dinosaurs, but the games are very different, in the same way racing games are unique to each other or how first-person shooters have all earned and deserve their own identity.

The hesitation, however, could even stem further than a straight forward comparison and be closer to a concern about litigation. Capcom also has teased a DC comeback and then didn’t, so it’s time for a new contender.

Richard: From our experience with releasing some old behind-the-scenes footage, there is an insane desire for more dinosaur games, we initially released these clips to see if there was an appetite and to obtain some meaningful feedback directly from the public before fully building the game. The communities that exist regarding paleoart, paleo games and enthusiasts are massive! We are paleo nerds ourselves.

MP1st: How did the game come to be? Is this a case of long-time Dino Crisis fans that grew up playing the games, and now banded together to make one themselves?

Hashbane: Your assumption is 100% correct and only part of the equation, the topic came up a few times and we were willing to make a small game with dinosaurs, just for fun. We had all worked with Unreal Engine, with varying degrees of understanding using UE4 and decided to make it a pet project, a few hours a week, maybe. Within the first week we had a working prototype that we could deploy. When we showed some friends & family there was a common, “holy sh*t, is this Dino Crisis?”. It was hard to deny the influence and other games like Turok and action adventure games in general certainly played a role initially.

It became apparent, we should probably look at making this a real game. This led to everything else, we started a new studio, we needed to dedicate our efforts to this game. Fortunately our other business, Dane Design, wasn’t really affected by the pandemic and became an initial funding source for the game.
Most of the older crew were heavily drawn to the similarities with previous dino games that we loved.

MP1st: Dino Crisis has such a loyal fanbase, how is the studio looking to “win” these gamers over?

Richard: Dino Crisis is and always will retain its own identity, we like what it was and have no intention to distract from that. We just know that so many of us have waited too long, and while there have been other tribute attempts at remaking DC, no other developer could get away with taking over the IP of Dino Crisis. That’s one of the reasons we are offering modding support(as well as character customisation in-game), if you want to call your character “Regina” and make the character resemble an early DC character, you can! Also Dino Crisis 1 and 2 had fixed cameras, almost top-down gameplay and that’s not what we are doing here.

Jade: Personally, I’m still a fan of Dino Crisis, there are some really cool games slightly similar to the early DC games, you know the 4:3 frame ratio and pixelated graphics, games like Compound Fracture. I’d say what’s important to lovers of DC is just that, we share a love for the original and hope to play something to bring back that nostalgia, that’s our goal with Instinction!

MP1st: Besides having Dinosaurs, what makes Instinction a “spiritual successor” to Dino Crisis?

Richard: Let me also address this broad term of spiritual successor here, we obviously all loved and still appreciate what Dino Crisis was and what it meant to a huge segment of gamers that had the pleasure to experience it in its heyday. We just intend to recreate what we all felt back then and also instill that experience in a new generation of gamers and with modernised gameplay and mechanics. 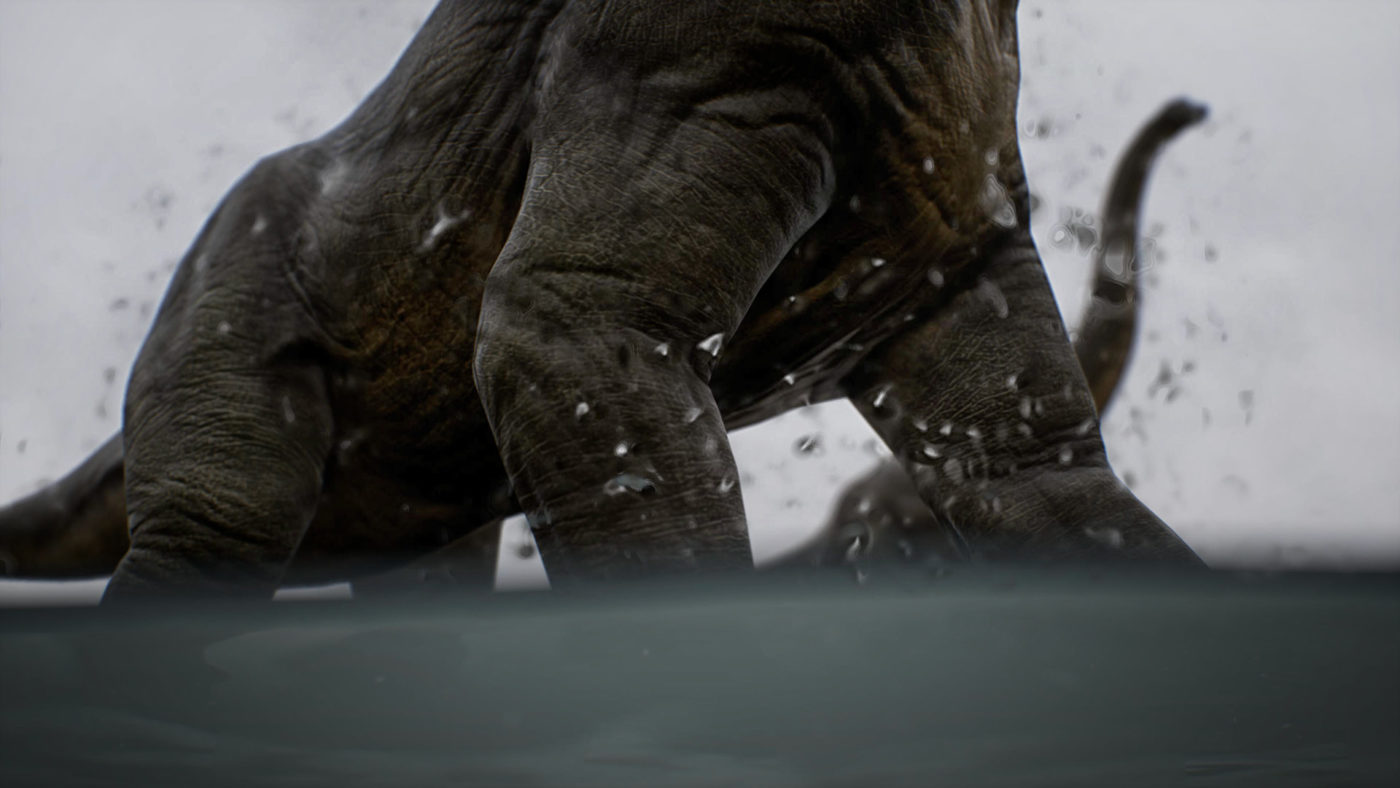 MP1st: Why do you think Capcom hasn’t revisited the Dino Crisis series for almost 18 years?

Jade: That’s debatable, and there are opinions from every which way. Some say they are still licking their wounds from the diabolical failure that was Dino Crisis 3, others will have you believe that their other IP, namely Resident Evil, took precedent, especially considering the Resident Evil movie was released in 2002 right around the same time Dino Crisis started to falter. You take your pick, it’s speculation and we don’t have the answers.

MP1st: From the looks of the snippet of gameplay and the recent third-person toggle test, there appears to be a lot of “weight” to the overall gunplay feel. Would you say this is true, or is it more of an arcade shooter? Why was it important to go this route versus the other?

Richard: The guns are meant to feel exceptionally accurate, from their rate of fire, perceived weight and how it affects gameplay is huge in this game. The weapons are projectile based and not hitscan, but on a lower skill level this is less noticeable. There’s more gunplay videos coming out and you’ll get a feel for how this is handled.

MP1st: Can we expect to see some close quarter interiors?

Richard: Yes, we’ll release more examples in the coming days. For those wondering, there is a massive research facility in the game, as well as a large cave and cenote system.

Richard: This comes down to believable movement, textures and sounds. They have  dismemberment and gore mechanics, if you’re planning on knee-capping a dinosaur, you’ll see it limping for instance. Some but not many are NPC (non-player characters) which add to the ambience of the game, yes you can kill them too, but you can think of the use of them similar to adding birds to a game. 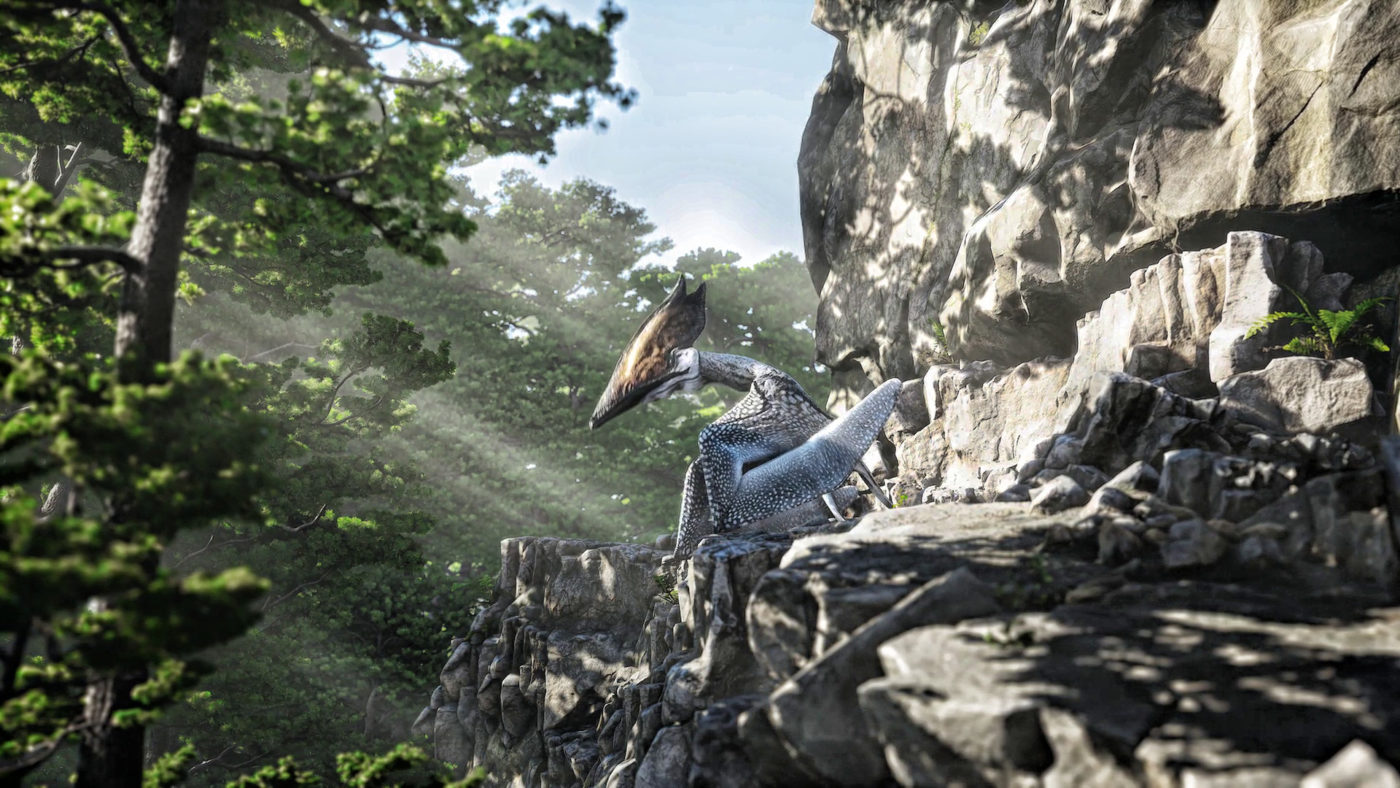 MP1st: Speaking of being alive, what can we expect from the AI? Will packs of raptors react differently in certain situations? Do you feel that players will have a constant fear?

Richard: Yes, you can expect flocking dynamics in the AI, this can also be said of some of the underwater gameplay.

MP1st How much gore can players expect? Will the game feature dinos eating humans or is it more implied carnage? What rating is the studio expecting for the title?

Jade: In one word: Gruesome. Once we release the reveal trailer we’ll apply for an ESRB rating, it’s likely not going to be child friendly!

MP1st: In terms of ambience, is this more in-line to traditional survival horror experiences? Or can players expect a more sandbox-y feel while maintaining tension?

Richard: The world is being designed in such a way that some areas can only be accessed or played through a certain way, objectives and missions will force the player to specific confines. The game is narrative driven, yet players aren’t restricted to play in sequence.

Jade: There are parts of the game that require holding your breath, there is a lot of underwater exploration. Sometimes you’ll have no weapons and will need to use your brain to get yourself out of tough situations. It has lots of side quests, however it won’t feel empty and purposeless like many open-worlds feel. 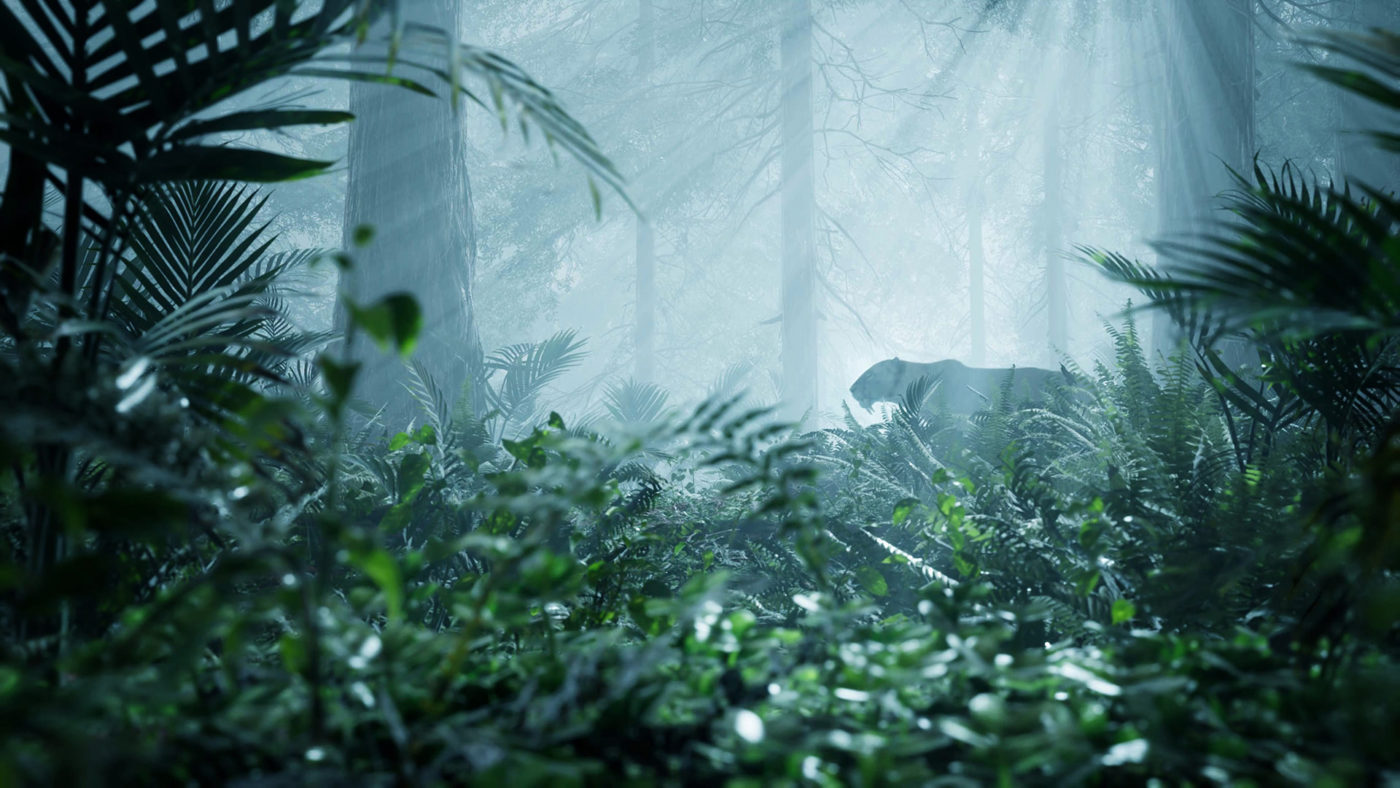 MP1st: Are there plans to use the DualSense’s haptic feedback to good use? Like, say, if a dinosaur takes a bite out of the player and such?

Jade: If you were to close your eyes and play with different guns you’d soon start to recognise different weapons, even with your eyes closed.

Jade: I personally love the adaptive triggers for shooter games, and while some think they are just a gimmick, I think the controller as a whole really adds to the game.

MP1st would like to thank Hashane Interactive for taking time out of its busy schedule to talk to us. Instinction will be getting its gameplay reveal later this year. You can check out official announcements from the game via the official Instinction Twitter account.