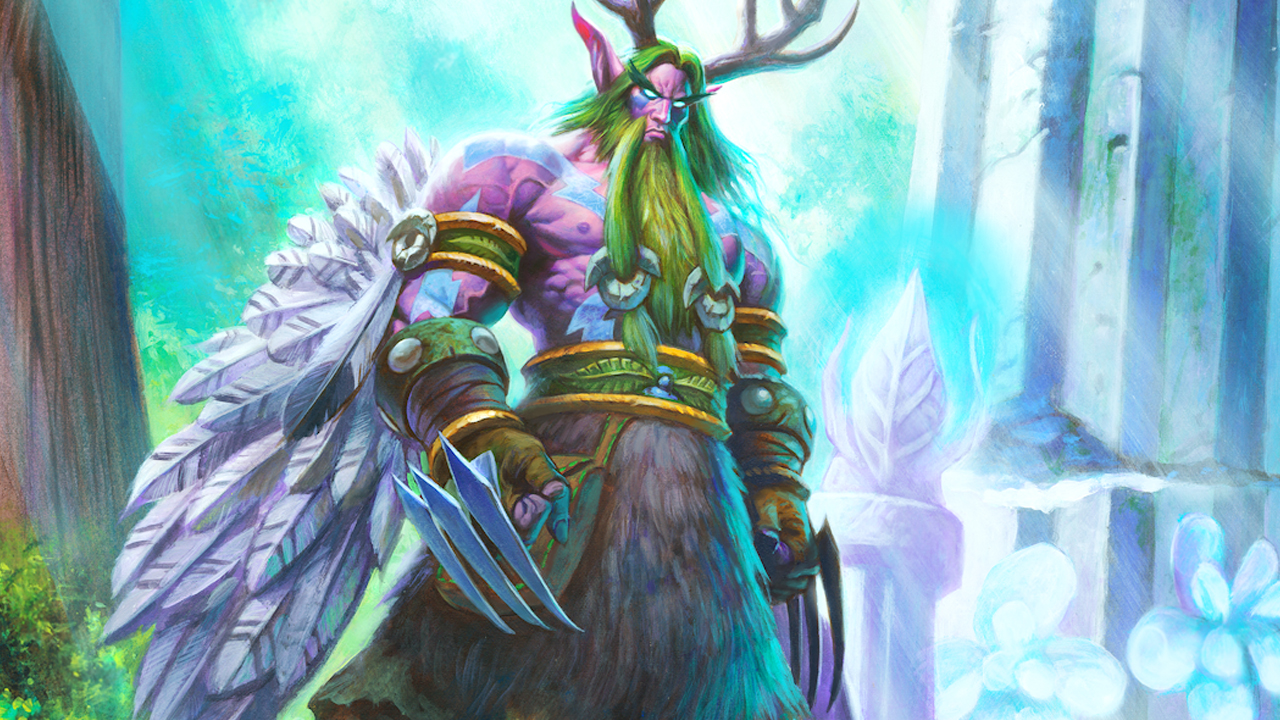 Blizzard has now confirmed that the Hearthstone Druid class will be getting nerfed, along with Murlocs. I can’t say that I’m surprised, as the pair have been causing absolute chaos following the addition of the Knights of the Frozen Throne cards.

It’s not clear when the patch will be implemented, but you can read up on the changes below.

Several powerful variations of Druid are currently seeing play, and all of them utilize Innervate. Innervate creates explosive starts to the game that can be difficult for the opposing player to recover from. This change leaves Innervate as a simple Basic card and slows down the explosive start potential, while ensuring that it will be utilized in decks that revolve around playing inexpensive spells.

We considered a few other options for Innervate:

Since Innervate is a basic card, we need it to be clear and simple. Along with Wild Growth, these cards inform newer players that Druids create mana as a part of their class identity.

We  kept in mind that cards like Counterfeit Coin were strong in combination with other support cards, such as Gadgetzan Auctioneer, Edwin VanCleef, and Combo cards. With the right support cards for Innervate, it may end up still seeing play, but won’t be in every deck—which is ultimately what we’re aiming for with this change.

Fiery War Axe has been a powerful Warrior weapon since the launch of Hearthstone. Already great tempo for its cost, Fiery War Axe is well complemented by Pirates and cards that synergize with weapons. Raising its mana cost by 1 will slow down the Warrior’s tempo and lower the overall power level of the card.

The other option we considered for Fiery War Axe was to lower its attack to 2, but that change didn’t feel intuitive enough. Generally, changing the mana cost of a card is less disruptive, because you can always see the mana cost of cards in your hand. Despite the increased mana cost of Fiery War Axe, we expect that it will still see play—other 3 mana 3/2 weapons, like Eaglehorn Bow, can be found in decks that may not have synergy with the weapon’s card text.

We’re not making the change to Hex due to a current power-level problem. Shaman is a class that currently has a lot of flexibility, but is lacking in both class identity and identifiable weaknesses. Changing Hex makes Shaman a bit weaker against big minions and worse at silencing—having both strengths and weaknesses in a class is important.

We are very wary of cards that also incidentally work as a silence. If a player wants to utilize a card with a silence effect, they should be giving up something else. For example, if a player decides to include Spellbreaker in their deck, then they are playing a card that is weak in some situations. Priest is an exception to this rule—silence is a part of their class identity.

Even though Hex is not always played in the more aggressive Shaman decks, we will be making this forward-thinking change with the overall identity of the class in mind. This includes avoiding Shaman cards that function as direct and powerful removal. We will continue moving forward with this design philosophy to help reinforce that ideal. 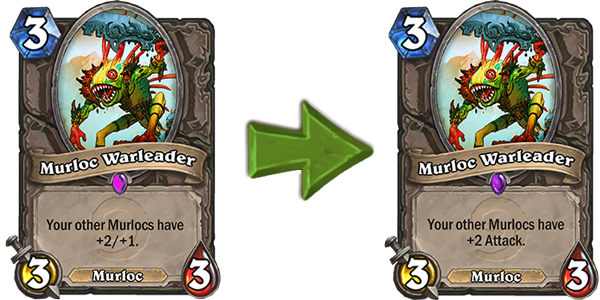 Murlocs are good at taking an early lead, and if a player can’t clear the board in time, the game can ultimately snowball to victory using cards like Murloc Warleader. Removing the Health buff from Murloc Warleader will make it easier for players to clear the board of murlocs, and still have it remain a Classic build-around card. Simplifying health buff interactions is an additional benefit of this change. For example, in its current state, having a Murloc Warleader in play then using Wild Pyromancer and Equality would not destroy other murlocs on the board, leading to unclear interactions for some players.

What other changes did you consider?

Spreading Plague is a great defensive tool for Druid to protect themselves against aggressive decks, but it was too efficient at 5 mana. Raising the mana cost to 6 will slow the card down slightly, while still allowing for the defensive minions Spreading Plague creates to be utilized in the later stages of the game.

The developers had also responded to the community’s concerns regarding “Ultimate Infestation” and “Ice Block.”

Our team has discussed making a change to Ultimate Infestation since it feels bad to lose to. However, our data shows us how good each individual card performs in a deck relative to other cards in that deck. Spreading Plague ended up being the best performing card in Jade and Taunt Druid, Innervate was in the top three, and Ultimate Infestation was somewhere around the middle—but it felt much more powerful since it has a huge effect when played.

We considered changing all mentions of the number 5 in Ultimate Infestation to 4, or removing one of the effects entirely. With the other changes we are making to Druid, ramping out Ultimate Infestation before turn 10 should happen less often, so we decided to leave it as is.

We are excited for these changes, and we look forward to seeing how they will shake up the game.

Happy to see the Druid get a big nerf? What about those poor Murlocs? Let us know!