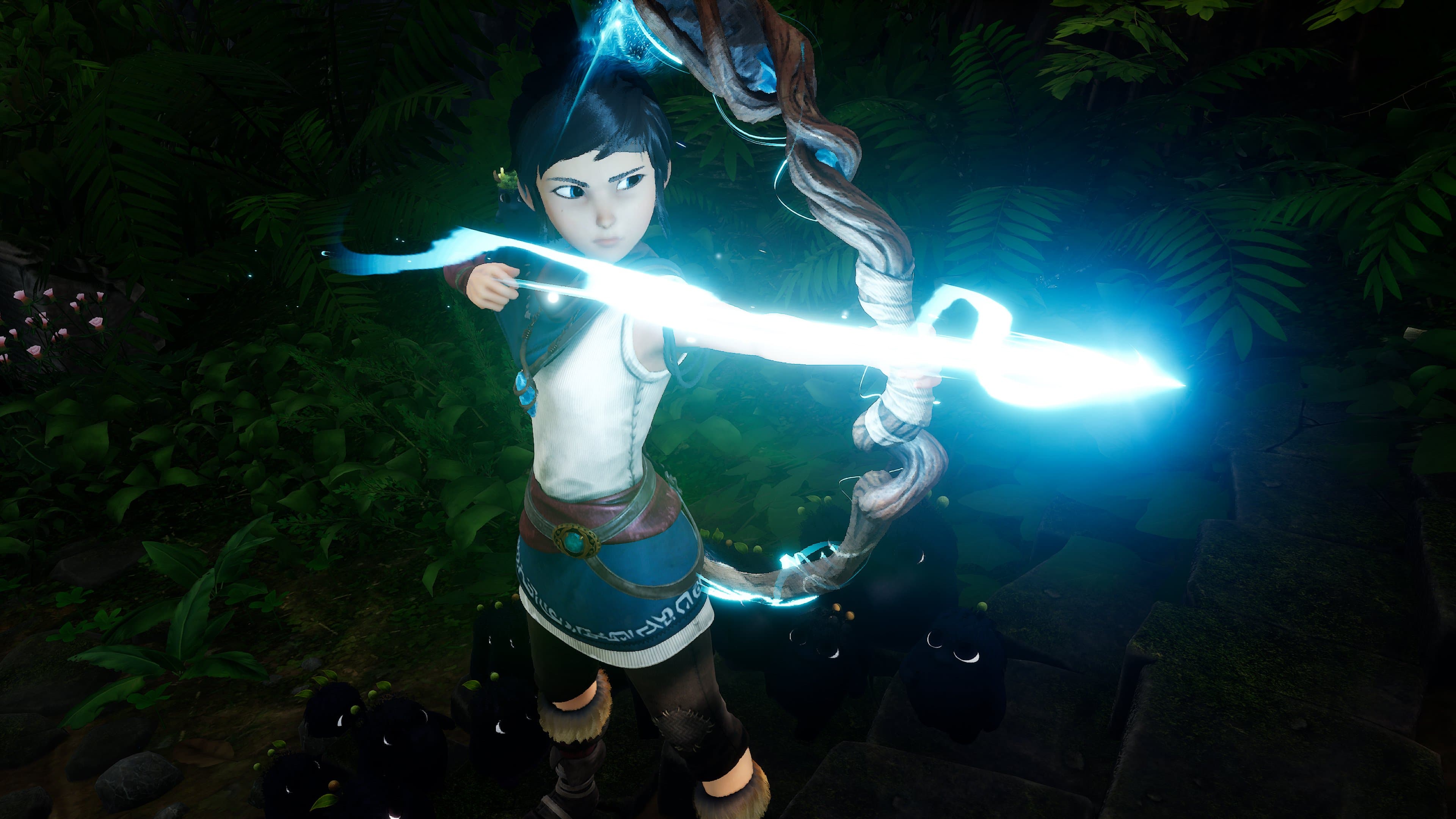 I have been looking forward to Ember Labs debut, Kena: Bridge of Spirits since it was first showcased on Sony’s first PS5 event back in June 2020. It looked like it was delivering on the promise of playing a Pixar movie. With Ember Labs history as an animation studio, I knew in my heart Kena was going to be something special. Well, the wait is over; I’ve completed Kena: Bridge of Spirits, and what I learned is that my heart knows nothing. While certainly impressive in many aspects, especially presentation, Kena: Bridge of Spirits falls short in the two categories most important to me: gameplay and controls, which is disappointing to me because it’s clearly inspired by Dark Souls, one of my favorite series of all-time but without any of FromSoftware’s polish and meticulousness.

The story of Kena: Bridge of Spirits is not only simple, it’s kind of rote. I’ve played countless games in which a malevolent force has corrupted the land, and the player is tasked with restoring the world back to its original beauty (as recently as the underrated Immortals: Fenyx Rising). In this regard, Kena doesn’t bring anything new to the table. It sticks with a classic gaming trope, and does it about as well as it can without breaking any new ground. The newish wrinkle is that each area has its own point of view character that Kena must rescue from the “Corruption” by collecting three relics each, bringing them back to a central point and then fighting the corrupted version of that character thus restoring them to the world. In all honesty, because I’ve done it all before I was never truly captivated by it, and found myself checking out at times. It’s perfectly fine.

It doesn’t help that we barely get to know Kena as a character. Even having played and finished the entire game, I still have no idea what she really wanted or who she really was. There are hints, for sure, but nothing that endeared me to her as a character. 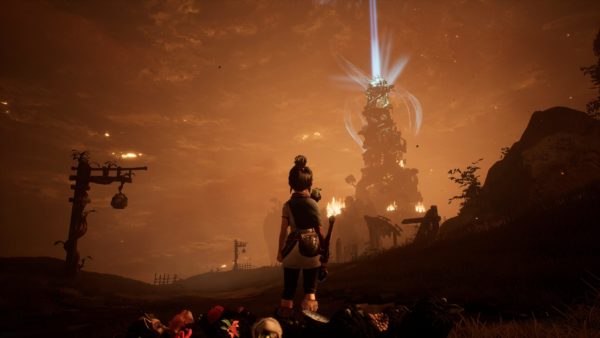 There’s no denying that Kena: Bridge of Spirits is a gorgeous game. The animations are impeccable, the world is beautifully realized, and the cutscenes are as good as any animated film out today. It’s clear that this is where Ember Labs’ strengths lie. The voice acting, while sparse is also really well done. Beyond the visuals, the score by Jason Gallaty is fantastic. If there’s an award for best score, this should definitely be in contention.

The level design is actually pretty great at times. It’s a huge interconnected map that makes great use of the PS5’s SSD which allows you to travel seamlessly from area to area. Fast travel is pretty much instantaneous as well. There’s also some fun environmental puzzles, especially when you get the Spirit Bomb which can almost move back and freeze time briefly, allowing me to navigate the level and reach other areas. Sometimes these are used as puzzles and can be quite creative, if never challenging. In fact, that applies to most of the puzzles. They’re fun, creative and never all that challenging.

Imitation of the Sincerest Form of Battery

Then there is the combat. You’ll spend a lot of time fighting enemies as well as a total of 16 bosses to test your mettle against that all have some kind of trick to them but can vary wildly in challenge. The combat itself is simple enough. Borrowing heavily from FromSoftware’s Soulsbourne games, R1 is light attack, R2 is heavy attack. Holding R2 will give a charged heavy attack, L1 is your shield and/or parry. The key difference is that the aiming is handled by L2 at all times and depending on R1 or R2 held in tandem with L2 will either shoot a Spirit Arrow or throw a Spirit Bomb. R3 is also the lock on.

As a Soulsbourne veteran, this should be right up my alley. Unfortunately, Ember Labs are no FromSoftware. The window to parry is hilariously and frustratingly small, and it’s often hard to tell exactly when the right time to use it is because there seems to be a delay in the input, and it’s shockingly janky and finicky. I played through the entire game parrying a ton, and rarely did it feel like I didn’t just get lucky.

It’s not just the parrying that feels unwieldy. I literally had to let go of the button to start a charged attack after a combo, wasting valuable time to go into the next attack. Whenever I pressed L2 and R2 in too close of succession the game would, I don’t know, think I wanted a heavy attack instead of to aim and charge an arrow. This is most noticeable when sprinting into an attack.

Lock-on is absolutely broken at times. There are enemies that can teleport, and it seems like the game is simply erasing their image but the framework is still there because I was stuck looking at where the enemy was, and couldn’t move the camera around to the enemy’s new position. Needless to say, this got my character killed on more than a few occasions. The camera will also sometimes jerk to face enemies when you’re running to find a healing flower which, you guessed it, also caused me to die.

Adding to this frustration is that some of the bosses spike in difficulty considerably. I would blow through some bosses on my first attempt while others took well over 20 tries. Partially because of the above stated woes, but also because some of the fights expect you to not mess up at all. You only get a handful of healing flowers in each boss arena and once they’re used up, that’s it. You have to play perfectly from there on out. And nothing is more frustrating than a multi-phase boss fight that negates one of your upgrades because god forbid, you have it easier through your own success and rewards. 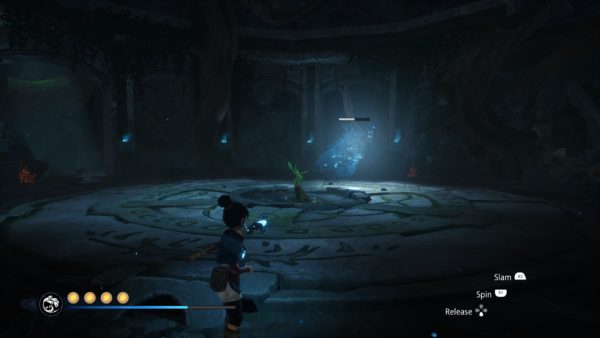 Flowers Amongst the Weeds

The upgrade tree is sparse but all of the upgrades are useful. It’s refreshing to play a game in which I used all of the upgrades multiple times throughout the game rather having some I will never use because they either offer very little or don’t fit my playstyle.

Rot are also useful. Rot are the tiny creatures of the world that are hidden throughout, and you need to use your other Rot to find them. Once you’ve collected a certain amount you will gain a Courage point in your meter which fill up as you deal damage to enemies. A full Courage point allows you to either use a special attack or sick your Rot on an enemy, distracting them allowing you to either get behind them or just wail away getting free hits. Rot can also be used to summon a Spirit dragon that slithers across the floor taking out Corruption spots which lead to other areas to explore or take out enemies.

The problem with exploration is that with the exception of finding more Rot, the collectables are pretty useless. They’re either hats for your Rot that can be bought at a hat vendor, or allow you to find currency which is used to buy hats from the hate vendor. If it weren’t for the opportunity to build my Rot army I wouldn’t have explored nearly as much.

If I sound like I am being overly harsh, I’m not. Kena: Bridge of Spirits is a good game that could have been better had Ember Labs tightened up the combat controls and offered better reasons to explore the gorgeous world they created. I hope Kena is a big hit so Ember Labs can have another go at it, and hopefully get more ambitious and really nail down their combat. Meanwhile considering how much I was looking forward to this game, Kena: Bridge of Spirits can’t help but feel a little disappointing.

Kena: Bridge of Spirits purchased for review and played on PS5. You can read SP1st and MP1st’s review and scoring policy right here