I’m not too particularly big on sports games, because I find them boring. I never got into Madden NFL, NBA 2K, or FIFA video games because I prefer watching their real-life counterparts rather than a virtual one. It’s why you’ll never see me ever review those games, because I just don’t get them. Many can probably relate to that, though I will say I have been a fan of sports games that are uniquely different, which is what Knockout City is.

Take Rocket League for example, it is on paper, a game of soccer, but played with speedy cars that explode. It’s still a soccer game at the end of the day, but the idea behind it is something we won’t ever see in real-life (that would be cool though). It’s outside of the realm of reality and let’s people know right away to not take it seriously.

This is what Velan Studios did to a simple game of dodgeball, turning it into ridiculous fun and competitive game that anyone can get into.

The rules of dodgeball are very simple; You get hit by the ball, then you are out. No one really has to be good at it or understand much of to really get into it, and it’s likely that it was the very first sport game you have ever played. I know it was for me back in  second grade gym class. Now, I wasn’t very good at it, as I found the ball hitting my face more often than me actually dodging it, but it was still a very fun game.

Twenty-some odd years later, a game of dodgeball never really crossed my mind, and it’s not like many sports lovers think of it, either, all considering it’s not the biggest sport, at least here in the states.

So when Knockout City was announced earlier this year, I didn’t have a whole lot of expectations, or even interest in it. I thought it was just going to be another sports game, trying to capitalize on the whole “Fortnite look” with it’s cartoony graphics. I’m happy to note that was I wrong; so very wrong. 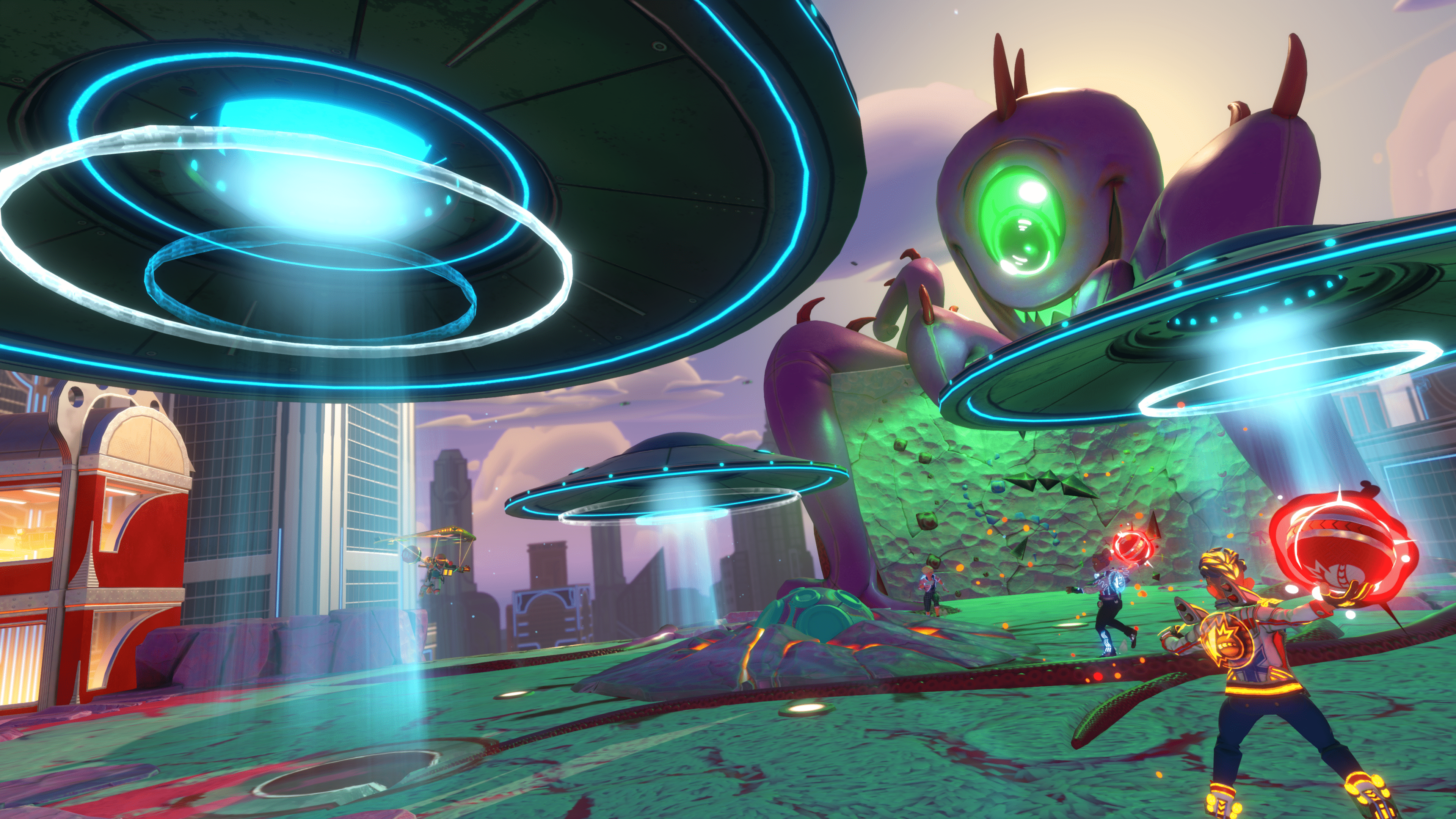 Like the actual sport, there isn’t a whole lot to Knockout City when it comes to rules, as the main objective is to simply bash your opponent with a dodgeball. That really is it, and it’s actually fun.

Living up to it’s name, Knockout City takes place in a city where the only form of fighting is through throwing dodgeballs. You’ll take up a user generated character that has a ton of different customizations that can be earned (or bought) through normal gameplay. They’re purely cosmetic customizations, so no need to worry about stat boosters or unfair item advantages.

I didn’t spend a whole lot time in the customization, nor later because frankly, I found the overall character models to be extremely ugly. I’m not a fan of the whole Fortnite visuals, and I almost find it to be an instant turn off, but for a game like Knockout City it is a fitting direction, I have to admit. The character models, however are ugly and unappealing compared to the levels. It’s not a deal breaker, but they certainly feel like they clash against the overall art direction.

Anyway, after you have created your character it’ll be time to jump right into the core modes. There are five modes at launch in total, with them being your standard team deathmatch (Team KO,) a 1v1 called Face-off, Diamond Dash, which is basically kill confirmed from Call of Duty, Ball-Up Brawl where you can only use your teammates as balls, and Party Team KO where every dodgeball is a special ball. It’s not much, although considering the price ($20) it’s also considerably fair.

All the modes we found to be extremely fun to play, with balancing being a non-issue. The gameplay itself is like a third-person shooter with some platforming around the levels. Characters feel great to move around, and with the help of assisted aim, throwing a dodgeball at other players is really easy to do.

To further expand on it’s own gameplay, there is a tackle that players can use to help knockback enemies and steal their ball, along with a catching mechanism to help guard yourself from elimination.

Even more, if you find yourself not having a dodgeball close by, your teammate can curl up into a ball themselves that can be thrown at enemies. You will never feel like you’reat some disadvantage just because the enemy team has all the balls in their possession. There’s always a way out, giving a true sense of gameplay balance.

One of my best moments what when I was facing off against three enemies at once with back-up in the process of heading my way. I ended up bashing one of the players to knock their ball out, and then catching another one mid-air to finish off one of the other player. It was a long enough play just for help to arrive and sweep up the rest. 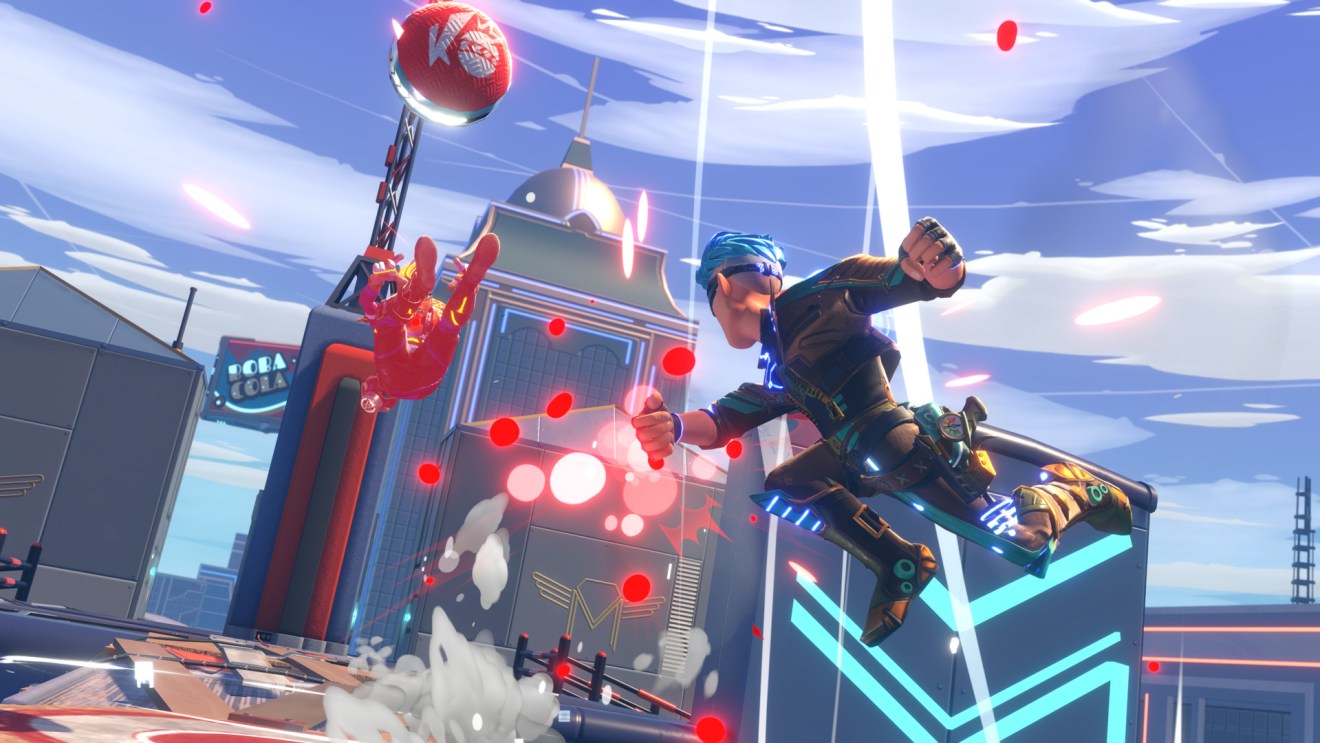 This is what I really love about Knockout City, it’s such a simple idea, and because of that Velan Studio understood that accessibility is the key to everything. Literally anyone of any skill level can pick this up an be pro in a matter of hours. Now, this isn’t to say there isn’t any challenges, as a well kept crew could easily pose a threat and give you quite a sweaty match.

I would say it’s comparable to Splatoon, where it’s easy to get to, but once you dive deep you realize just how big of a competitive game it could be. Hopefully that chase is enough to give a thriving community, though it helps Season 1 is looking to bring plenty of needed content.

I wasn’t expecting it, but Knockout City was a huge surprise for me. It’s fun, easy to access, and simple, yet smart. Velan Studio have really nailed down the core gameplay to create something truly special here. Never did I think that a game of dodgeball would translate so masterfully into a video game like Knockout City. If there is perhaps on major fault, it’s that the game probably would have been better suited as a free-to-play, even though it only costs a  $20.