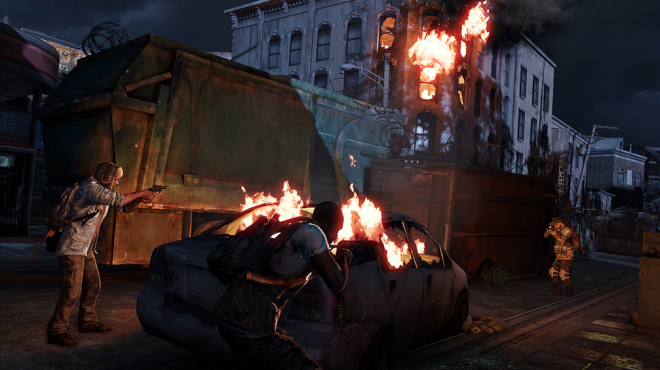 Sony and Naughty Dog detail what’s in store for The Last of Us fans and season pass owners eagerly awaiting word of new downloadable content.

Weather the opposing Faction and the random, dynamic dust storm on the Suburbs map. Explore a layered map of an overgrown urban environment with wild giraffes in the background in the Bus Depot map. Stalk around in a dark, eerie, moonlit, environment – the perfect setting for some serious stealth – in the Hometown map. Bookstore features a stacked, bi-level layout adding a highly unique dose of vertical gameplay.

Check out some new screens of the four new maps below:

They also made mention of the following DLC to arrive later this year and early next year, explaining that DLC 2 will entail single player content tying to the narrative of The Last of Us, releasing this December-January, while DLC 3 will once again be multiplayer focused and will arrive in the first half of 2014.

To make the wait a tad easier, Naughty Dog is throwing in some extra goodies for season pass owners; over 60 different head customization items for use in multiplayer.

Both the head customization items and three DLC packs will be made available for non-season pass holders as well. However, you can still snag The Last of Us season pass in the PlayStation Store or GameStop for $19.99, scoring you 75% discount, according to Naughty Dog.

Tags: DLC Featured PS3 The Last of Us
Previous Post

Check Out Battlefield 4 Running on the Xbox One