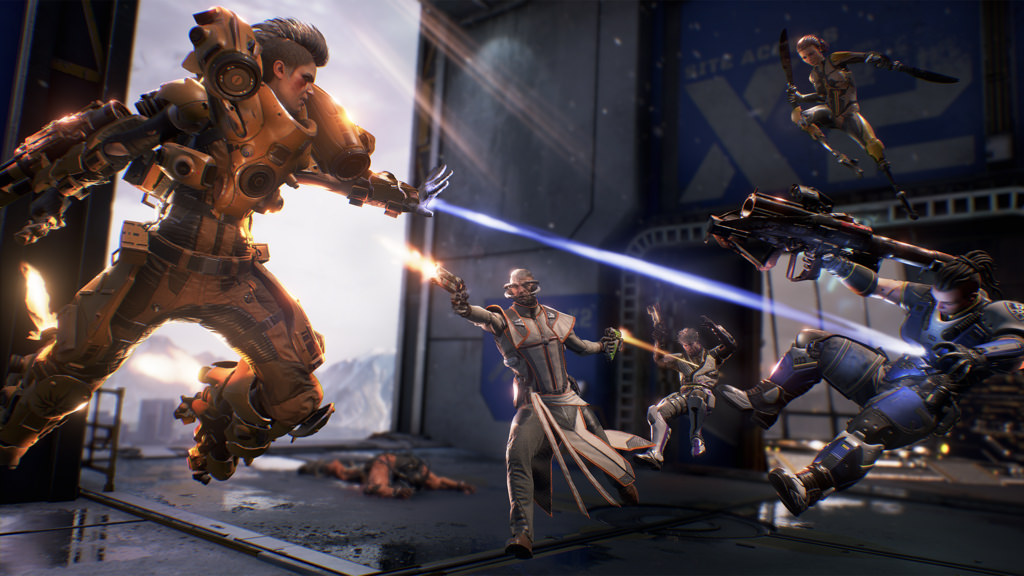 Just a few days ago, Boss Key Productions teased the upcoming LawBreakers DLC schedule where it announced that new characters, maps and more will be added for free soon-ish. Now, in a post on the game’s official site, Boss Key has popped the lid and given us the LawBreakers DLC roadmap for Q4 2017!

There’s going to be new maps, new tutorial modes for new players, game tweaks and a ton more. Boss Key isn’t giving up on the game just yet, even if the player numbers on PC are continually sinking.

We recognize that new players might be turned off due to a lack of knowledge on the ins and outs (and ups and downs) of the game. We are improving our new player onboarding experience with new tutorial gameplay features along with new tutorial videos. We believe these new changes will give players (both new and old) the knowledge they need to begin competing at a high level and to understand the nuances of the game and the classes.

LawBreakers is not a fire and forget title. It’s a game we crafted to run for years. But before we talk long term, we start by thinking small… this is why we are committed to continual, rapid fire updates to the game. This allows us to be responsive to issues brought up by the community and iterate on balance changes as is needed. Some games go months between updates and while that may work for them, it doesn’t work for LawBreakers. We’re going to continue to listen to your feedback and update the game rapidly, so keep sharing your thoughts with us.

The inaugural post-launch map release is Namsan, the first map set outside a post-shattering United States. It is currently in testing and is slated for release later this month.  As with everything map, mode, and class related in LawBreakers, all players who own the game will get this map for free.

Our content update coming soon isn’t just about a new map, we’re also experimenting with entirely new modes. We call these Skirmishes, and each one is temporary. They’re all about playing the game different than you can in Quick Match, and to start things out we’re going to drop our Team Deathmatch Skirmish in a brand-new playspace. Yep, we’ve been listening.

Oh, and be on the lookout for some special time-limited, Blitzball-themed weapon and character skins you can only get during this update.

This is the big one! You won’t want to miss what we have in the works for you in the coming months. The brand new Competitive features are coming and when they drop, you’ll have a chance to see how you match up to the best LawBreakers has to offer. We’ll have a bigger update closer to the release, but here’s the official Boss Leagues logo!

There’s a new class coming in later this year, and Boss Key offered a sneak peek at the character design.

The new map post-September will be Valhalla, and will be out later this year.

Finally, Boss Key has addressed the low player count for LawBreakers. Check out the studio’s plans to hike it up and how this content roadmap is tied to bringing it up.

The big question everyone is asking is about CCU… we are all acutely aware of this and realize that it is an issue that not only impacts gameplay, but community morale. Depending on your region, we’ve seen how it takes some people longer than others to find a match, and we’re working around the clock to improve this by optimizing the game, adding lots of new content and onboarding to increase the number of players.

When we made LawBreakers, we did so with a long lifecycle in mind. We have planned and designed new features to bring new players into the action every month also to challenge and excite LawBreakers players. This dual pronged approach is actually a design philosophy that we will implement every post-launch update: make the game better for those who already have it, and to make the game more exciting and appealing for those who don’t.

In game terms, we believe this philosophy will bear more players short and long term, which should drive CCU increases with each improvement.

For example, the “Onboarding Experience” changes may seem like it’s designed only for new players… but we also wanted to create better tools for all players to improve in the game. If you want to try a new class, or if you want to understand how to better play against a class, we think these tools will help everyone.

Namsan is another great example of this philosophy at work… and one reason we’re really happy with our “Post Purchase, Maps, Modes, and Classes are Free” approach. We are really proud of the design and the lore of the new Namsan map; it’s made to fit in with the Zero-G world… but with a slight twist to expand the combat. We think that anyone who owns the game will have a great time playing it, and we’re hoping it excites some of the players who stopped playing for a bit, bringing us back to higher CCUs.

It’s also why we’re coupling the Skirmishes with this map update. We will always work to make sure the game offers tons of way to play. Adding different ways to play the game outside Quick Match with unique modes should help. LawBreakers was created as a high mobility, high reward game, but we know that sometimes you need a break between super intense matches. With this in mind, we are crafting unique modes that lets both rookie and veteran player experience the game in new ways.

That’s a lot of stuff planned for a supposedly dead game, no? Let’s hope players give it a chance and LawBreakers gets a second wind.