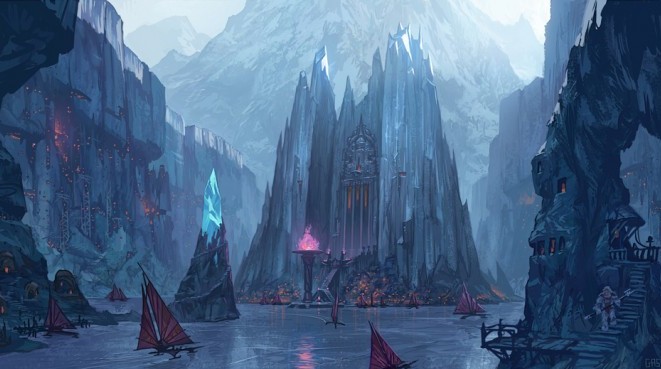 League of Legends is receiving a huge update with regards to how champion skins are sold, changing the cost of some of them (both up and down, but mostly reducing the prices) and making preparations for the new map, Howling Abyss. There are also a few incoming balance tweaks to help make every champion more viable.

First, let’s start with skin price changes. Skins are one of the main ways to show your love for a specific champion, and they usually cost 950 RP for normal skins or 1820 for legendary ones (with the exception of Pulsefire Ezreal, wich costs 3250, and a few older skins that cost either 390 or 520 RP). Only two of those (and both of them have in-game changing effects) cost 1350 RP. However, starting April 25, several skins will now have a different costs, decreasing and increasing some to the 520, 750 and 1350 benchmarks.

Here’s a breakdown of the new skin prices with what features you can expect for each skin:

You can find the full list of price reductions here, or use this image to see the changes visually instead of reading the names.

Everyone loves the custom game All Random All Mid (even pro players love it, two teams played ARAM in the finals of a MLG tournament). That’s why League of Legends is finally receiving an ARAM queue including the new map Howling Abyss!

The queue is still being tested on the PBE servers, but it’s probable that with all that’s going on in the Freljord at the moment (recent Trundle & Sejuani visual updates, Lissandra the new champion who is from Freljord, Quinn’s journey through these lands, Anivia & Volibear’s upcoming skins) this will be one feature to be soon implemented. There’s also a new item named Poro Snax, which you can give to the lovely neutral creatures that live in the Howling Abyss.

While the random element is a really fun part of Howling Abyss, we also understand there are times you simply don’t want to play a particular champion. That’s why we created the reroll feature specifically for this queue. When you’re really not in the mood to play your particular champion on Murder Bridge, you can reroll and get a different random character instead.

Here’s how it works. As you play matchmade games on Howling Abyss, win or lose, you’ll earn points you can save up to purchase a reroll in champion select. You’ll earn a base number of points every match, along with some bonus points based on the number of champions you own. While there is a cap on the number of points you can store up, you’ll be able to reroll multiple times in a single champion select if you’ve got the points.

And don’t worry about wasting your hard-earned points on queue dodgers. If someone leaves your match at champion select, everyone in the game gets a refund except the player who dodged. 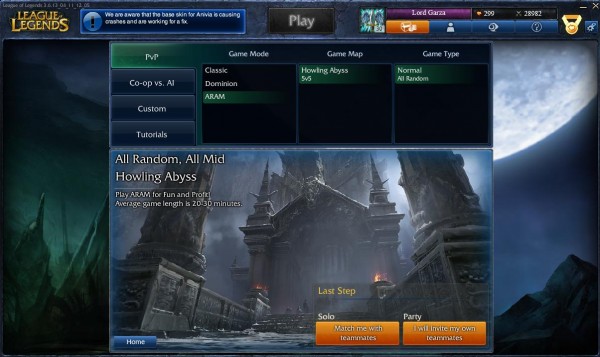 ARAM queue is currently in preparation!

As a last thing, let’s remember that what’s most important in a game where there are over a hundred different champions to use, balancing is tremendously important, especially when there are different game modes across League of Legends. That’s why someone at Riot Games has recently told a forum member about what’s being planned. One of those changes is limiting the total amount of potions a player can have at any time during the game, which will give less sustain than what it was meant to give, bringing back champions like Irelia, who were countered by heavy use of potions.

At the moment, we are planning to limit the maximum number of health potions you can hold at any time to five. This change was intended to combat super high sustain starts, where champions (particularly those going top and mid lane) would buy as many health potions as possible (and a ward or two) in order to sustain in lane forever. The problem is that this really destroys any incentives players have to interact. Resourceless champions in particular benefited from these starts and, for champions with mana pools, we’ve actually seen that some literally do not have enough mana to burn through that much sustained HP.

Riot games also plance to address a problem with different game modes. Champions that work well as intended in Summoner’s Rift just get stomped in maps like Twisted Treeline (3v3) or The Crystal Scar (Dominion), for example. That’s why they have decided to implement map-specific balance changes.

We’ve been well aware of how the Dominion and TT communities have felt left behind and ignored, but we wanted to make sure we had a plan that we were confident in and committed to before commenting, because we don’t want to make any more empty promises.

Dominion’s fun (it’s fast). So is Twisted Treeline. But they both share one key problem – League of Legends is competitively balanced for Classic gameplay on Summoner’s Rift. Our original goal was to create rulesets that would result in balanced experiences across all game modes with the same champion stats. We’ve experimented with itemization, game pacing, map features, and other design elements. While we’ve had limited success here, there’s still room for improvement, so we’re going to take the plunge: in the near future™, we’re going to be implementing map-specific balance changes for individual champions.

This is going to take a few patches to implement, but we’re actively working on the tech, and we’re already got a bunch of specific balance changes in mind that we’re iterating on. We’re sure there will be lots of questions regarding the initiative, so we’ll announce more specifics when the time comes. Remember that this is just the foundation for support – we’ve got some other tentative plans that we’re exploring to enhance both maps farther down the line!

What  do you think about the skin price changes. Will you get a skin before its price goes up, or will you buy one because its price is getting reduced? Excited (as I am) for the new ARAM queue that’s being prepared for release? Post your comments below!