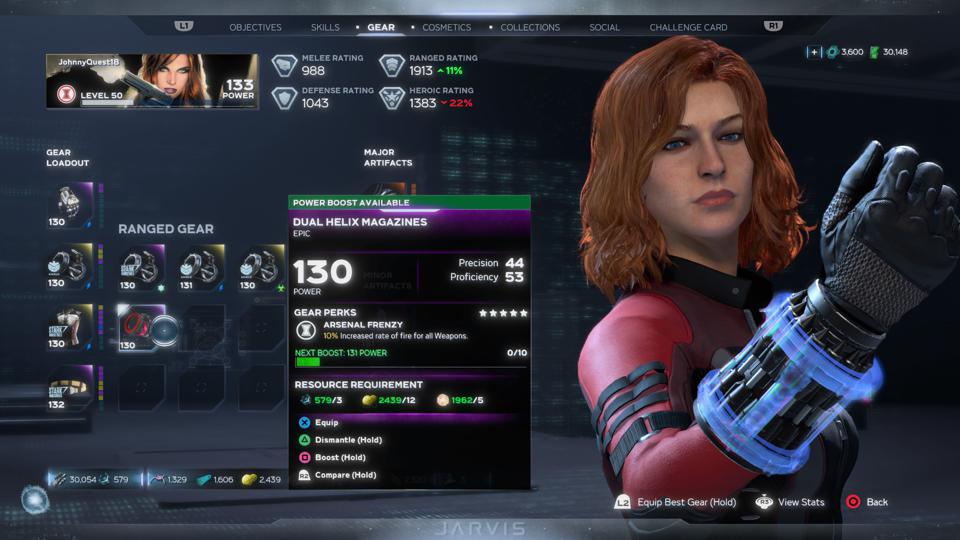 Crystal Dynamics is hard at work on the next patch for Marvel’s Avengers, and one of the big changes planned to be included are hero set gear, its attributes status effects, focus and more! Check out the complete breakdown of the Marvel’s Avengers hero set gear upcoming changes below that are set to drop in patch 2.3!

But let’s get the most obvious out of the way: Perks have received a huge naming pass to improve clarity even if the description of the Perk is the same. Many Perks on your current gear will get new names but will remain unchanged in application.

Next is the names of the sets themselves. Each of the three Hero Sets will have their title seen in the description panel of mission chains or on the War Table when viewing a mission’s details. This should help pin down where to get what if you’re looking for a specific piece of gear. – Alex Kende, Crystal Dynamics Game Designer

The Classic Power set is designed around highlighting several key features of the Hero without focusing on any single aspect. Pieces from this set can be matched well with other sets as it does not rely on itself due to having general overall improvements. This Hero Set is perfect for those trying to create custom builds and filling in the blanks while experimenting.

Previously the legendary pieces of this set could only be found in Elite Hives and still will be found in Hives.

Normal and Elite Villain Sectors will drop this set with every run and have a small chance at the Exotic versions, but the daily and weekly mission chains have a higher chance.

Changes to the Classic Power Set Coming in Update 2.3

The Technical Power set is designed around a technical or support aspect of the Hero while being more focused on survival, close combat, and armor. Many Perks will increase the duration of Skills, add defensive/offensive capabilities to Heroics, or help Heroes while in the thick of combat. This set has gotten a huge overhaul with new Perks for Heroes to help meet this intent.

For example, Hulk’s Worldbreaker’s Alloy now has Untouchable Boneshaker, which can activate a short duration Boneshaker after defeating enemies with Rage Attacks or when Perfectly Evading an incoming attack. Another example would be Ms. Marvel’s Marvelous Body Armor, which now has Polymorph Resistance that allows melee attacks to slowly regenerate Willpower while Polymorph is active.

The legendary versions will still be found in Vaults but will now also come from the Vault mission chains.

Gone is the need to hunt for Vault coordinates. The SHIELD mission giver will offer one Vault mission per day while one Elite Vault mission chain will appear weekly on the usual Thursday reset.

The Elite vault mission chains will now award two pieces from this set (attack/defense split) with a chance to drop the Exotic variants. The Exotics were previously only awarded from Last Avenger Standing.

Each completion of a Vault will earn you one of these pieces, but the mission chains have a much higher chance of dropping the Exotic.

Changes to the Technical Power Set Coming in Update 2.3

Update 2.3 also comes with another round of Perk edits to the Hero set from Priority Missions and Flashback Missions, which is now named the Apex Power Set.

The intent of this set is to excel at a single aspect in the Hero’s kit. Be that power attacks or group attacks, many of the Perks are set up to stack on top of each other to make that specific ability powerful at the cost of adding little to other abilities. Kind of like a glass cannon!

Changes to the Apex Power Set coming in Update 2.3

For more on patch 2.3, check out some of the planned changes connected to rewards, Mega Hives and more.