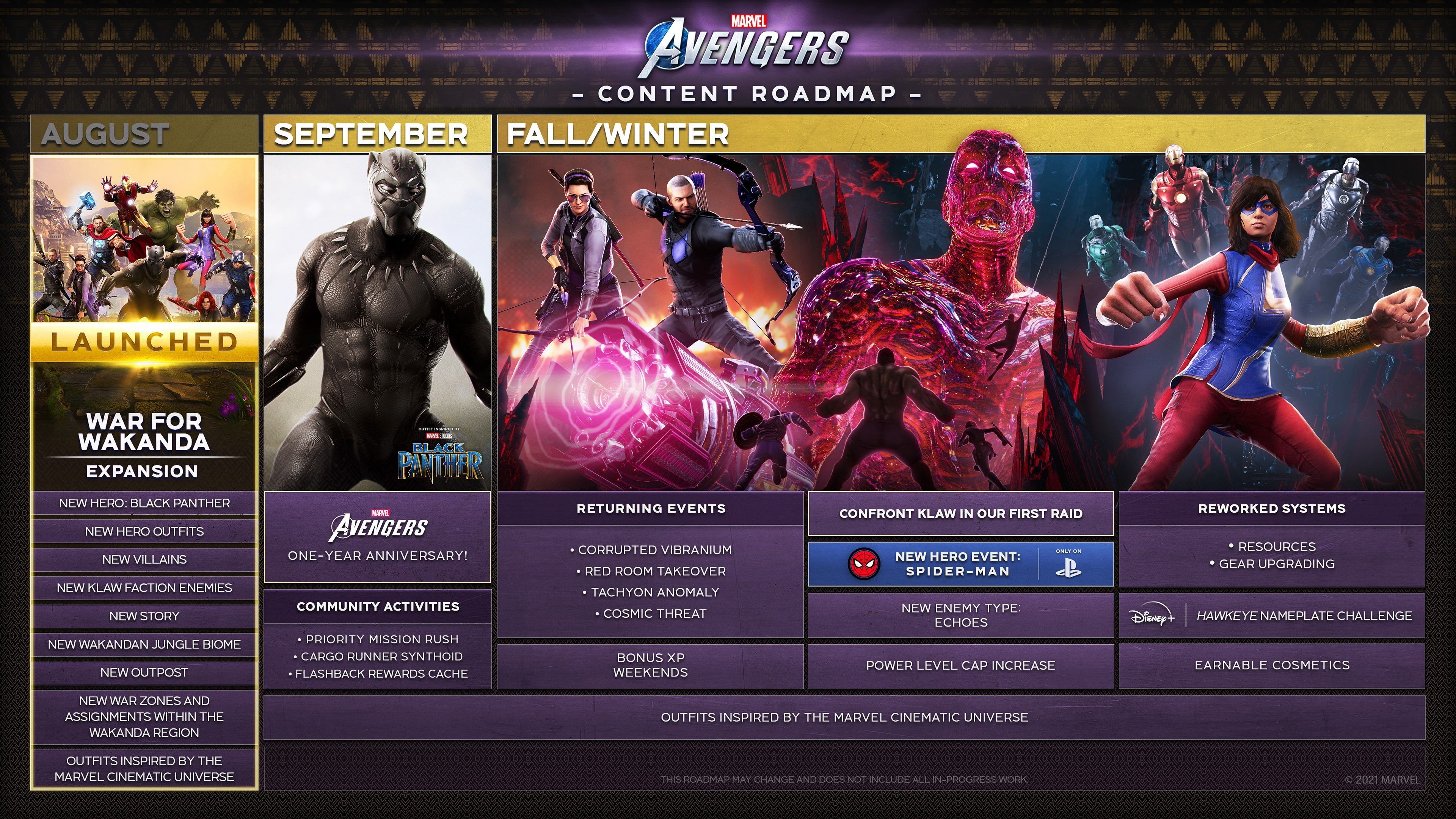 Last month, Crystal Dynamics mentioned that Marvel’s Avengers would be getting a new roadmap, and that has happened today. The studio has revealed the Marvel’s Avengers roadmap update, and it even mentions Spider-Man!

Crystal Dynamics has a few in-game events planned for this September, which includes celebrating the game’s one-year anniversary. Expect more MCU-themed outfits to be available in the Marketplace as well.

From Sept. 2-16 we’ll reward players who log in and complete all the story-based campaigns (Reassemble, Taking Aim, Future Imperfect, and War for Wakanda) with a celebratory nameplate. For those of you who have already completed all campaign content, the reward is granted retroactively. There will also be free items in the marketplace:

We’ll also roll out three in-game community activities in September – the first being Priority Rush Missions, which allows players the chance to complete one Priority Mission every day rather than only one per week – this means more chances for exotic gear!

We’ll round out the month with another community activity that greatly increases the spawn rate of the Cargo Runner Synthoid, as well as a third activity offering additional rewards for completing Campaign Flashback missions. Paired with an XP-boosting event, all Heroes will feel extra powerful by the end of September. It’s a great time to jump in and rapidly boost your alt Heroes or max out new ones! 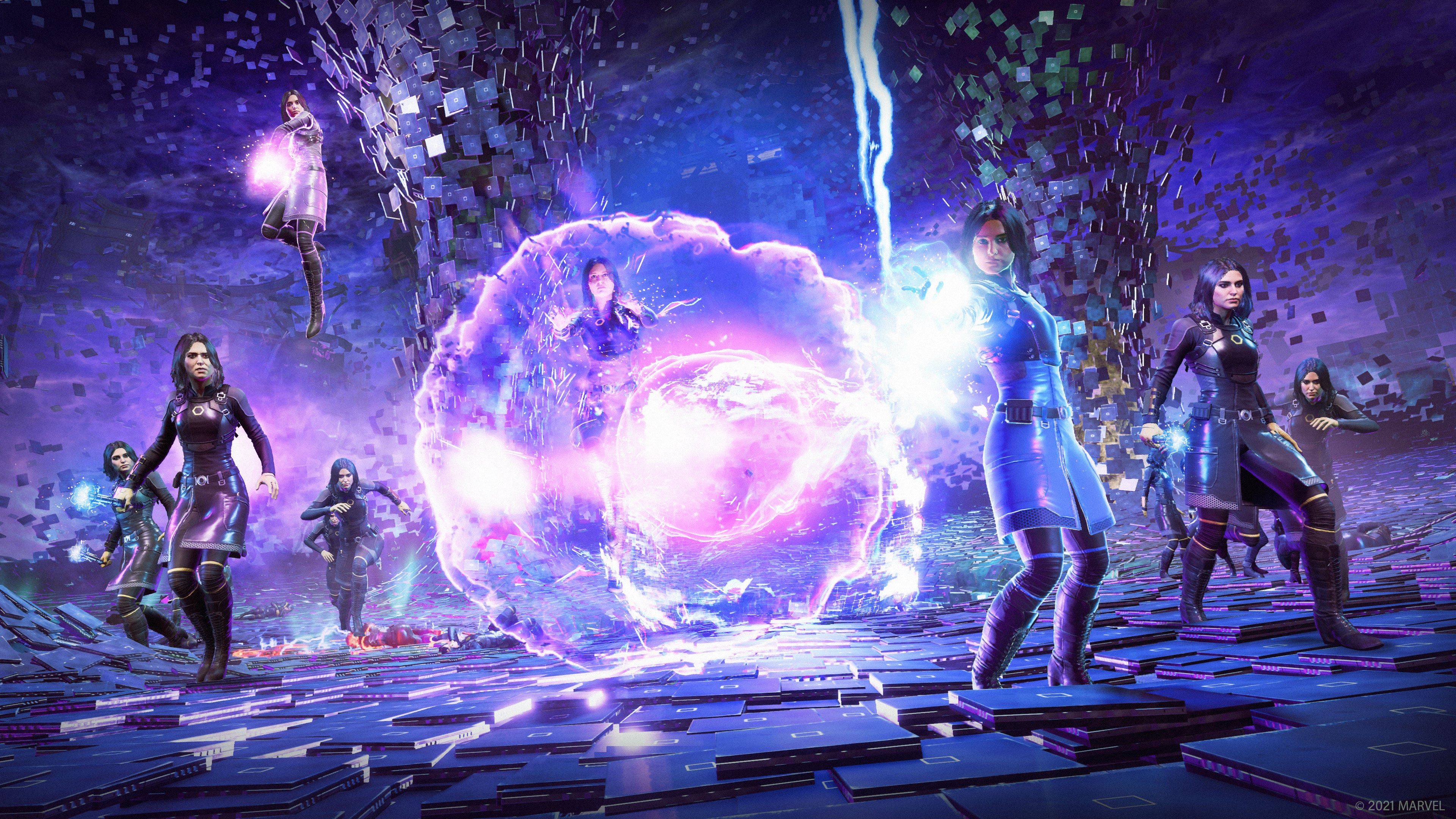 Check out some of the other stuff planned for the Marvel’s Avengers roadmap update, which includes system reworks, and more.

Gear: Improved gear upgrading, more rewarding gear, more late-game focused gear… we hear you! With the upcoming power-level increase we want to make sure players can keep their hard-earned gear as they progress. The new system will allow players to upgrade Epic, Legendary, & Exotic gear from power level 100 all the way to the new power level cap! As we continue improving gear, we are also taking a closer look at Hero Set Gear: where it’s obtained and how to improve clarity around use. We’ll have more details about all of this in a future blog.

Resources: We’re currently working towards a more streamlined and focused approach to resources. In this new system, each resource will have a single specific purpose to help improve clarity – like how Polychoron is used exclusively for upgrading major artifacts, and Upgrade Modules are reserved for upgrading gear. Fragments will be the sole exception as they will remain a resource with multiple uses. We’ll share more details as our plans are finalized.

Earnable Cosmetics: We’re adding ways to earn cosmetics through gameplay, including items that were previously only available in the Marketplace. We’ll talk more about the details of those systems in the coming months as they are added to the game.

We’re also polishing our first raid – available in both standard (PL 150-160) and Elite modes (PL 160-175) – which will offer a conclusion to  Klaue’s story in War for Wakanda. This will be the most challenging content yet, meant to not only test the mastery of each Hero but also the well-built four-player Strike Teams out there! Collaboration and observation are crucial to beating this one.

The Klaw Raid features custom-crafted levels, new threats that require complex and tactical combat, and stronger enemy variety themed to the Villain being faced. New enemies called Echoes – sound constructs created by Klaw – have been created and tailored exclusively for this experience. With the Power Level increase to 175 yielding more compelling drops, it is a notable example of replayable and rewarding content that fits our mantra moving forward.

One of the things we most love about working on Marvel’s Avengers is our opportunity to celebrate exciting new content from all branches of Marvel media. We’ll be offering some well-timed tie-in events coordinated with Disney + Marvel programs and, we’ll be releasing more MCU outfits as we collaborate with each production’s  creative teams.

Between larger game updates we’ll be bringing back limited-time events to give our new players a chance to try them out and provide everyone opportunities to earn exclusive rewards and high-level gear. These events include our Corrupted Vibranium Event, Red Room Takeover, Tachyon Anomaly Event, and Cosmic Threat Event.

Finally, there will be a new playable Hero with a Hero Event starring Spider-Man in 2021, only on PlayStation platforms. We’ll have more information on Spider-Man closer to launch and you may catch a glimpse of him here and there along the way.

It is extraordinary to see how far we’ve come in just one year! Thank you for all of these victories! As for the War for Wakanda expansion, it’s obvious that many are enjoying time with the King.

Per Crystal Dynamics, they have “many plans” beyond this Marvel’s Avengers roadmap update, which include stretching into late winter and beyond. Expect more quality-of-life improvements, updates on heroes and villains and more.