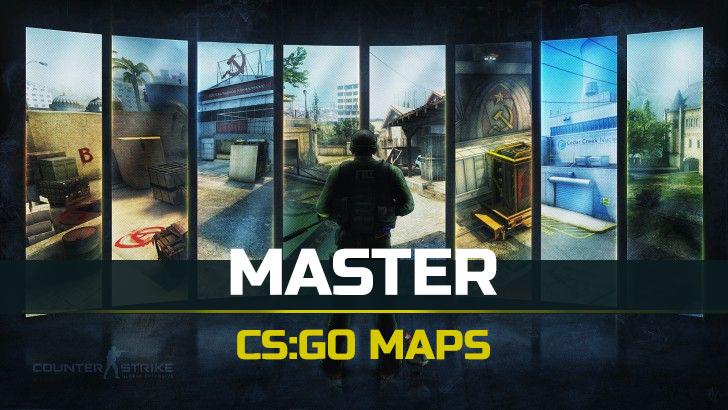 Counter-Strike: Global Offensive is a first-person shooter. If a player wants to perform well, he/she has to know the maps. There are eight main CS:GO maps which are regularly played and most of which reside in Active Duty pool. The best professional teams across the world play the Active Duty pool in international competitions.

If you are looking for mastery and overall improvement of skill, you need to learn one map at a time. When you approach learning maps in this way, you will gain knowledge and be a valuable player to any team at your skill level. Here is a list of the most popular CS:GO maps in no particular order.

If you are new to Counter-Strike, this might not be the map for you. There are three levels on the main building on this map. These are a catwalk level, an A site or the main level, and a B site or the basement level. Each site has a varying entry point because of verticality. These points of entry can be confusing when you are trying to maneuver around the map. This confusion and the fact that it is rather tricky as enemies to discern nearby sounds make Nuke hard for a beginner to learn.

The three-way nature of this map makes it simple. It has pathways that connect to the main lanes and a layout that is easy to learn. Its timings are well balanced. The features of these maps make it rather easy for beginners to master. It is also an excellent map to test raw skill.

This map has similarities to Cache in that it has three lanes, which makes it excellent for learning strategy. The pace of any round is heavily based on the aggression of Terrorists. Counter Terrorist versatility is easy throughout buy rounds. It requires reasonable map control and rotations knowledge. The momentum of this map can be changed by a first retake phase or a good execute. It is the hardest map when playing alone.

This is the most popular first-person shooter map. The map has three lanes within it, and each bombsite has three entry points. The layout balance is very polished, and this stops any team from having an advantage at the start round. Solo queuers and coordinated outfits can do very well on this map.

Overpass is similar to Inferno in that Counter-Terrorists have a massive command of maps at the start of a round. The defense is punished with a severe rotation in this map when Terrorists find their way into bomb sites. This map has an extended range of sight, which is also a source of the difficulty. This aspect of Overpass gives a distinctive edge to those with unique aim and AWpers. This map allows for a variety of play styles.

This CS classic has a built-in system of risk and reward that is solely based on a team’s control of the map. Terrorists find ways to push back Counter-Terrorists who are given control of bomb sites at the beginning. Communication is essential in this map as gaining control of a site individually is nearly impossible.

This is the second most challenging map on our list to learn. Its corridors are tight-knit, and it has wide-open areas. The map does not have a well-defined middle portion because the castle in which it is located has a somewhat confusing layout. Counter-Terrorists’ rotations can appear impossible and easy to predict when terrorists take control of the bomb site. Timing is the most complex idea related to Cobblestone because of the test of rotation knowledge.

This map is quite tricky for beginners, particularly those who have not mastered more accessible maps. It is the most argued about map and even revised by some. The corridors are incredibly tight for Terrorists to make their way through. But when they succeed and enter sites, they flush out Counter-Terrorists and win. The defense has a considerable amount of map control. A good Train player must know their capabilities, especially when team members are not visible.

Are you trying to learn CS:GO? You can learn the maps by starting with those that are mentioned as easy to learn from our list. If you get good, you can participate in international competitions and win yourself some good cash. You can as well make some fast cash in CS GO bets at BUFF.bet, recommended by the very authoritative catalog of online bookmakers – allbookmakers.com.