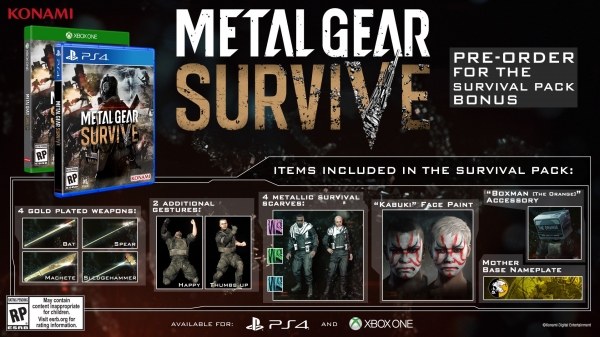 Konami has dropped a big bombshell out of nowhere today as the publisher has announced the Metal Gear Survive release date to be on February 20, 2018 in North America, February 21 in Japan, and February 22 in Europe!

Priced at just $39.99, Metal Gear Survive’s pre-order bonuses was also revealed and it includes the “Survival Pack” that has the following included.

While Hideo Kojima isn’t involved in Survive, the game picks up right where MGSV: Ground Zeroes. Prepare to scavenge items to build weapons, forage for food and more. It will once again focus on stealth, and will have a single-player and co-op mode of up to four players.

Check out gameplay footage of Metal Gear Survive in the video above which was captured from this last year’s Tokyo Game Show.

Destiny 2 Has a Giant Poke Ball Buried in Distant Shore