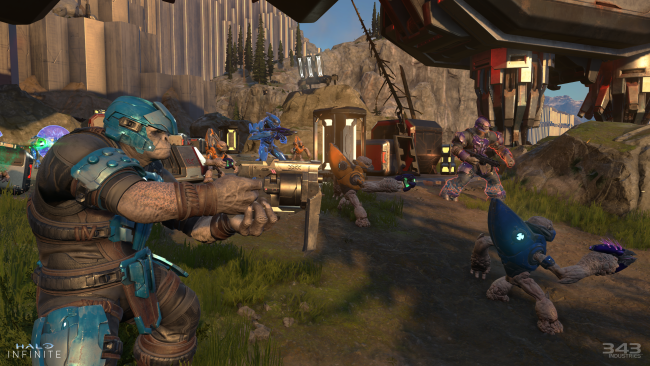 While Halo Infinite’s gameplay reveal for was supposed to be a a crowning achievement for the next-gen console the Xbox Series X, it sadly, didn’t work out that way, with gamers from social media calling out the shooter’s graphics as being lackluster.

In an interview in Inside Gaming, Xbox marketing chief Aaron Greenberg states that Halo Infinite gameplay reveal was a “work in progress” and that the launch version will be a “visual showcase.”

We’re in the middle of a global pandemic. It’s July, we’re far from holiday [season]. You’re seeing a work in progress game. You probably watched the stream in 1080p, maybe, so we have put up a 4K60 on-demand stream. So people, I’d say, go back to look at the game in 4K60. We did that deliberately. It’s very hard to show the full power and graphic fidelity of what Xbox Series X will be able to deliver for you over a stream.

It is a work in progress. What you’re seeing today—and I can tell you, because we see build check-ins every week, and they make progress week after week—so between now and holiday, it’s just going to get better and better.

Greenvberg adds that for him he thought “it looked great,” and it “sounded great” as well. The Microsoft exec adds that it will be a “visual showcase” once it launches this holiday.

Trust us, when you play this holiday, it’s going to be a visual showcase for Xbox Series X.

You can watch Greenberg talk about the Halo Infinite graphics complaints at around the 16:25 mark in the video below.

Here’s to hoping Greenberg’s statements ring true come Halo Infinite’s launch. On the dev side of the spectrum, 343 Industries themselves commented on the Halo Infinite graphics crticism, which you can read about here.

Are you optmistic that Halo Infinite’s graphics will look considerably better at launch? Or did it look fine for you? Let us know your thoughts down below.

Source: Inside Gaming via PCGamer