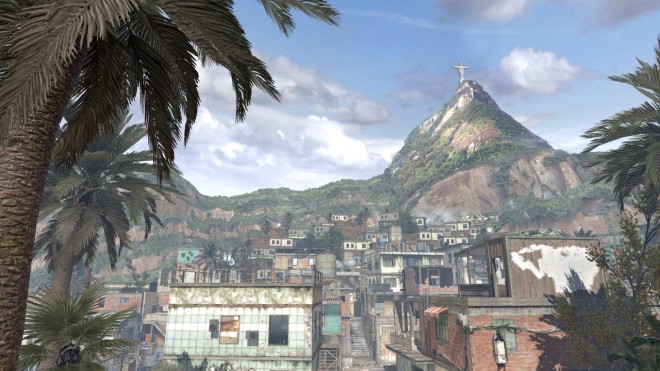 The fan favourite map, Favela, has been removed from all public playlists on Modern Warfare 2 for the time being.

Over the past few days, gamers have noticed that the high-octane and fast-paced Brazilian slums multiplayer map has not been showing up, perhaps due to malicious means such as hackers spoiling the map rotation. Earlier, unconfirmed, rumours said that the popular map was disabled due to insensitive and racist remarks towards the Islam religion were found inside the map.

Activision has since confirmed that Favela does indeed have insensitive and inappropriate images that may offend Muslims.

In a bathroom hangs two paintings, each with frames which have a religious quote in the Arabic language embedded on them. It reads “Allah is beautiful and He loves beauty.” The means of which these pictures have been placed, one of which is directly above the toilet, potentially could be offensive to Muslims and those who follow the Islamic faith. It is inappropriate to see religious teachings written in or placed on something inside the bathroom.

Activision and Infinity Ward have been alerted to the blunder, of which the Muslim gaming community pointed out, and the map will remain off all public playlists until a patch has been released to remove the text or pictures and any other instances that may be considered racist towards any religions.

Favela is still playable through private matches. One video, made by a Muslim gamer, describes the issue in English with Arabic subtitles but also mentions he did not mean for the map to be completely removed for all players. You can watch it below.

In a statement to Kotaku, an Activision representative said:

We apologize to anyone who found this image offensive. Please be assured we were unaware of this issue and that there was no intent to offend. We are working as quickly as possible to remove this image and any other similar ones we may find from our various game libraries.

Activision and our development studios are respectful of diverse cultures and religious beliefs, and sensitive to concerns raised by its loyal game players. We thank our fans for bringing this to our attention.

I reached out to Infinity Ward’s Community Coordinators, Tina Palacios and Candice Capen, today to ask when a Title Update for Favela will be available but have yet to receive a reply.

We will update this report as soon as we get more information.