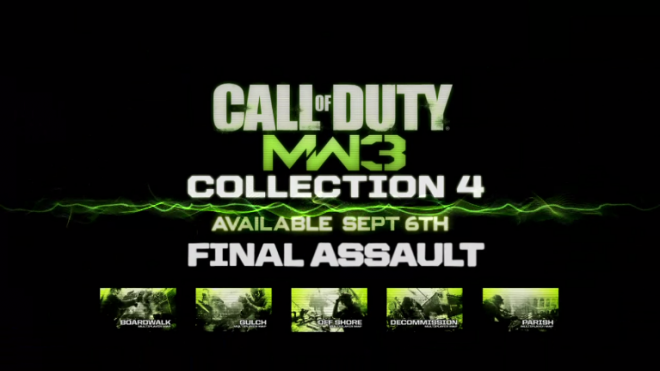 As Call of Duty: Modern Warfare 3 DLC content calendar winds down, Infinity Ward have announced the release dates for the last three multiplayer maps for next month. They also have news about PS3 ELITE premium members and their penultimate month of content.

September for every Xbox 360 player will be online multiplayer-dominated. Three brand new maps for ELITE subscribers: Gulch, a “fired charred forgoten mining town”;  Boardwalk will position you and “your enemies on the beach and fight for dominance at the arcade”; and the “New Orleans’ war-torn French Quarter” Parish concludes the huge 9 month Content Calendar.

Content Collection 4 – appropriately named Final Assault – will be released September 6 for all 360 players. ELITE premium members will be able to download Drops 22, 23 and 24 a day early on the 5th. You can view the Content Calendar here.

Final Assault will contain all of September’s new maps and will also include the August drops – Decommision and Offshore – as an all-out multiplayer map exclusive Content Collection. Call of Duty released a video to coincide with the announcement which you can view below.

PS3 subscribers will get access to the insane Chaos Mode plus two Special Operations missions – Light ‘Em Up and Special Delivery. If you want more details about those Content Drops, read here. A date for Content Collection 3 for PS3 and PC gamers will be announced next week, Candice Capen tweeted.

Are you looking forward to the old-styled “Map Pack” Final Assault Collection? And PS3 gamers, are you excited to finally play the chaotic new Spec Ops game mode? Post your comments and opinions below!