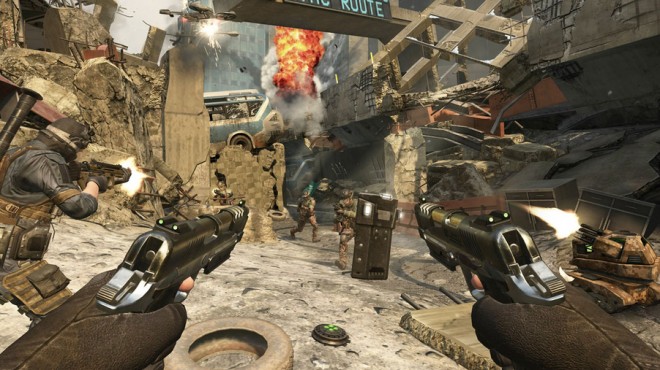 From “CoD-Casting” to round-based game modes, It’s quite clear that the Treyarch team is dedicated to making Call of Duty: Black Ops 2 a first-person shooter that the competitive community can really sink their teeth into. Taking a look at Vonderhaar’s Twitter feed recently, you can see some of the interactions he’s been having with hardcore CoD players as he reveals a few eSports-friendly features we can expect down the road.

“Thanks to my co-worker Jay, you can disable bomb plant sounds in Custom/Lan games,” he recently mentioned. “The competitive crowd has asked us to do that for them.” Though it may not sound like much, the ability to turn on and off bomb planting sounds can have a drastic effect on the gameplay. “Bomb fakes,” for example, will no longer be possible with the sound turned off.

Health tuning has been a requested feature from the competitive community for quite some time now. Obviously, tweaking the amount of health a player has can significantly alter gameplay, forcing players to come up with new tactics or strategies. Luckily, Vonderhaar confirms, “yes. I took care of that. That one was easy. You can modify from 30%-200% in increments of 5. So, 35, 45, etc., all.”

It looks like Vonderhaar is working his magic and making things happen. He recently tweeted this image, signifying that the option to turn off 3rd person spectating could possibly come at launch. If not, then it’s at least ready to go for a title update:

While many of these setting tweaks may seem small, they, and hopefully a few others revealed in the near future, should really allow the competitive Call of Duty community to customize their gaming experience with Black Ops 2.

What are some of the competitive Black Ops 2 settings you are most excited about?

Also from David Vonderhaar, don’t miss out on his latest commentary based on the Black Ops 2 multiplayer reveal trailer right here.