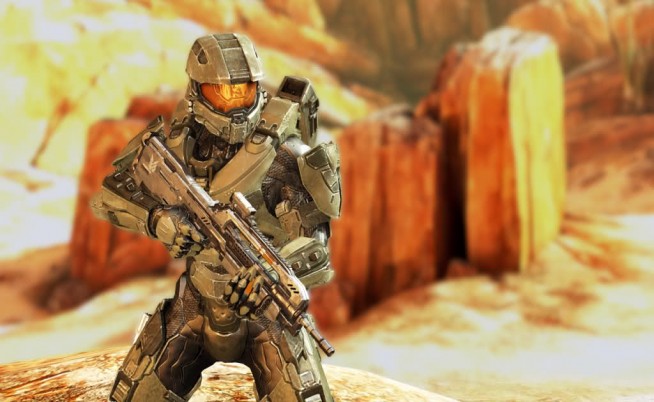 Speaking to Game Informer, Lead Multiplayer Designer on Halo 4 Brad Welch details some of the new additions to Halo’s multiplayer  including a new ranking system, new armor abilities and new game modes, on top of some returning favorite features.

As many already know by now, much of Halo 4’s competitive multiplayer will be taking place on the combat deck of the UNSC Infinity, a human space vessel, inside a holographic combat simulator. Here, red and blue Spartans IVs will battle it out in combat training sessions.

Welch promises faster and smoother gameplay in Halo 4 to try to make players really feel like a super-human Spartan: “We’ve been working hard on that to try to make you feel like a super hero Spartan. I think we’ve gone back to some faster game play because of that – the move speed, the jump heights – all these things are tweaked a bit in Halo 4 and it’s all to sell the experience of being a Spartan IV.”

343 Industries has developed a new ranking system for Halo 4’s multiplayer. Players will earn what developers are calling “Spartan Points” upon each rank up. Ranking up is achieved through gaining experience. These Spartan Points can be spent to tweak your in-game equipment and loadouts. Remember that the equipment and unlocks you purchase in Halo 4 now actually have effects on the gameplay so players will have to choose their unlocks wisely. Welch also mentioned that developers found that players would develop much more interesting setups between different weapons and armor powers now that they are able to tweak their own loadouts. Welch explained, “we feel like it’s actually letting players use the entire Halo sandbox in a lot broader way then perhaps they could have in the past.”

Players will also notice that Sprint is now a base ability granted to all players regardless of their selected loadout. Developers found that since sprint was so Popular in Halo: Reach, it didn’t leave much room for experimentation and pushed aside many of the other armor abilities. Additionally, adding sprint as a base ability also contributes to upping the pace of the gameplay, something 343 Industries is obviously going for in this instalment.

A new armor ability called “Forerunner Vision” allows players to see through walls while Hologram and Active Camo are the two of the more stealthier abilities. So, some players may have to rethink their strategy of hiding in corners, waiting for their prey. Forunner Vision could be a game changer. However, Welch promises that developers are focusing on balancing all armor abilities so that each ability has a proper counter.

Halo 4 will be introducing a new free-for-all game mode called “Regicide.” Here, players will take part in your basic, every day free-for-all but with a slight twist. A player who starts earning the most kills becomes the “King” who then has a bounty placed on his head. He then becomes marked on the minimap for everyone to see, making it tougher for the top player to stay King, but at the same time, also gives him plenty of targets to shoot at. This should make for a much more interesting take on a classic game mode.

Welch wasn’t able to get into much more game mode details, but he did mention that Capture the Flag would be returning as well. In fact, all the classic modes are returning but with slight revisions. He also talked about adding supporting actions in any objective game type to help promote team play. All the traditional split-screen modes will be supported as well, including 4-player local split-screen and 2-player  split-screen online.

Welch concluded by addressing concerned, hardcore fans of the Halo franchise: “I’m sure there’s concerns about progression affecting the gameplay in Halo 4. I think, for hardcore fans, first, we’re not taking out any of the old functionality of, you know, you can set up custom games, you can play matches with the preset loadouts and weapons, that’s not going away. It’s a Halo tradition. On top of that, we’re working really hard to balance these things out – beat these elements out, making sure there’s no dominant strategies. We’ve had these things working for a long time now. We’ve been doing a lot of play testing with them and we’ll continue to do that. In this case, you’ll have to trust us. The game still feels like Halo. I think everyone who’s had a chance to play it knows that it still feels like Halo. It doesn’t feel like a different game. So, you’re just going to have to trust us on this one.”

Do you trust 343 Industries to provide fans with the best Halo multiplayer experience yet? We’ll find out November 6th, 2012, but we also want to hear from you in the comments below!