NetherRealm Studios, the development team behind the Mortal Kombat franchise, has been relatively quiet ever since the reveal of Quan-Chi a few months back. Thankfully, they’ve finally decided to break their silence in the latest issue of Finnish gaming magazine, Pelaaja, revealing yet another cast member joining Mortal Kombat X’s roster along with more details on the game.

Despite the issue not being available yet to the public, a member of the Test Your Might forum, AeroGrunt, managed to snag a copy early and translate its contents. It contains tons of new information about Mortal Kombat X, such as the first details of its online multiplayer and, of course, a new character reveal.

The new character in question is none other than a now aged Kung Lao. This addition is a rather surprising and shocking, considering of the events that unfolded during the franchise’s reboot in Mortal Kombat 9. You can see the first image of one of Kung Lao’s here: 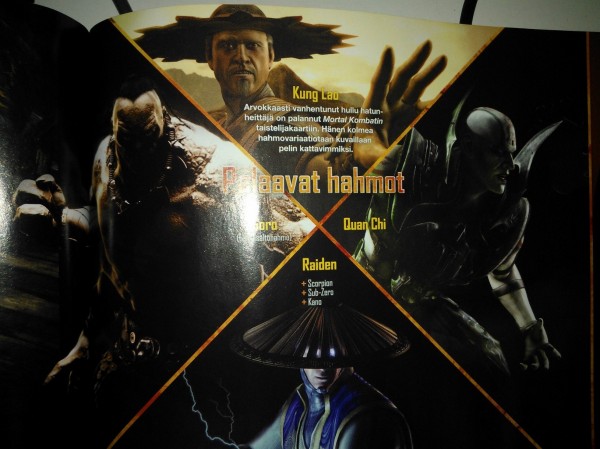 Taking a page from Kano and making use of the game’s 25-years-in-the-future time line, Kung Lao is sporting a completely new look. Much like the rest of the revealed cast, Kung Lao has three very distinct fighting styles that you can check out below:

Elsewhere in the latest issues of Pelaaja, Ed Boon spilled the beans regarding what NetherRealm Studios has in stored for the online portion of Mortal Kombat. He said:

“Online features are much more complex this time around. For example when you start the game you get to choose your own alliance from five different options: Lin Kuei, White Lotus, Brotherhood of Shadows, Special Force and Black Dragon. Basically each team gathers so called “battle points” for their team, which decides how the game’s menus look both in single and multiplayer. This way each player contributes to the entirety whether or not you prefer the social aspects or playing by yourself.”

That’s not all, as Mortal Kombat X will also feature the ability to have any issues, such as bugs or character balancing, addressed via hot fixes, much like Injustice: Gods Among Us. Those who loved the Challenge Tower from Mortal Kombat 9 will be also happy to know that it will return in Mortal Kombat X, with some challenges constantly changing, even changing up to every hour.

Mortal Kombat X will be available on April 14, for the PC, PlayStation 3, PlayStation 4, Xbox 360 and Xbox One platforms.