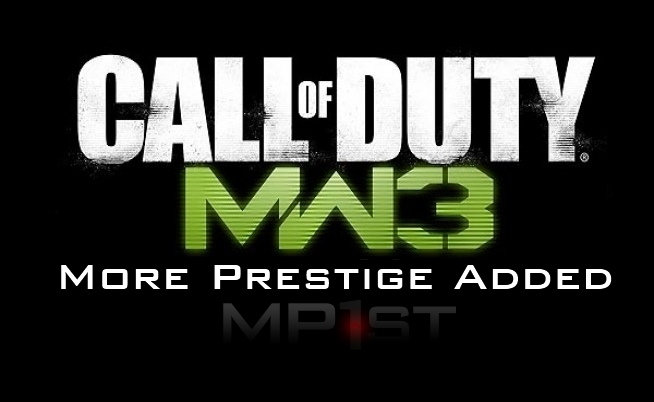 Last week, we reported on the fact that the latest Modern Warfare 3 PC patch increased the number of prestige levels on the platform to 20. Also, we noted that Xbox 360 and PS3 users will get the same treatment at a later point.

In response to our earlier report, Infinity Ward on Twitter confirmed the addition to the PC version of the game, and gave PS3 and Xbox 360 a time frame as to when levels 16-20 will be added to Modern Warfare 3. “Yes, prestige 16-20 are out now on PC MW3. [The five new prestige levels] will release for Xbox on 5/15 and PS3 mid-June,” Infinity Ward stated. Five new prestige levels equate to 400 extra ranks.

Of course, the month gap between the two consoles didn’t sit well with some PS3 players. Activision’s Dan Amrich took to Twitter to clarify, “As I understand it, it’s more efficient to update multiple things in one game patch. I think that’s why PS3 adds MW3 prestiges in June w/DLC.” He added, “I say this because a lot of people are taking the delay as a personal insult. But nobody hates you; it’s just how patches work, AFAIK.”  Releasing a patch for consoles reportedly costs $40,000.

It was recently announced that Xbox 360 users, with Elite premium subscriptions, will receive several DLC drops tomorrow, May 15th. Of course, PS3 players will have to wait until mid-June to get the new DLC along with the aforementioned prestige levels.