As in previous iterations (except  for Black Ops), Modern Warfare 3 has upped the level count for prestige. Now, you have to go through 80 levels in order to prestige. One fan asked Bowling why MW3 has hit 80 levels, to which Robert answered, “We’ve rebalanced the leveling curve (not a grind at the end now) and this helps with that. Higher but smoother.” So, don’t let the number throw you off; they’ve changed the leveling up curve to be flatter. Here’s the history of level counts in the Call of Duty series: 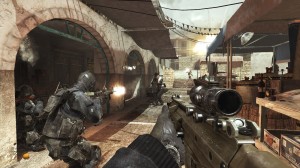 If you noticed in our gun lists, primaries and secondaries, we didn’t include the stat bars because we were told that they weren’t final. Robert confirmed that when he stated “the stat bars were not correct in the CODXP build.” He went on clarify that “we’re constantly rebalancing and changing and don’t set those till last.”  Recently, we reported that the ACR was the most popular gun throughout COD XP. Interestingly, Robert Bowling’s professed his love to the gun by saying “Yes, the ACR 6.8 is one of my favorite guns in MW3.” We, here at MP1st, thought that the ACR was a tad too forgiving on recoil in MW2, but Robert reassured that weapons in Modern Warfare 3 have “more kick and recoil than before. There are also Weapon Proficiencies that help you specialize and reduce that.” Click here to check the complete list of proficiencies along with an explanation of each. I don’t know about you, but I liked being able to customize my weapon’s reticle. You might be glad to hear that “there are [in MW3] a number of reticles to choose from as you rank up each individual weapon.”  Speaking of color options, you’ll be happy to know that “there is a Color Blind Assist option in multiplayer to help you out.”

For those of you who are hoping to get dedicated servers on consoles, Robert Clarified “Matchmaking and Dedicated servers on PC. Only P2P matchmaking on consoles.” However, the reason why consoles aren’t getting dedicated servers is “because there are 30 million people who play it. P2P is the best solution for the time being.” I guess we are stuck with P2P for another year, but on a brighter note, “[Matchmaking] is not the same as Black Ops. Lots of improvements went in for party + local searches.”

For those of you who are looking forward to the Spec-Ops, please read MW3 Spec Ops and The Importance of Self-Revive.