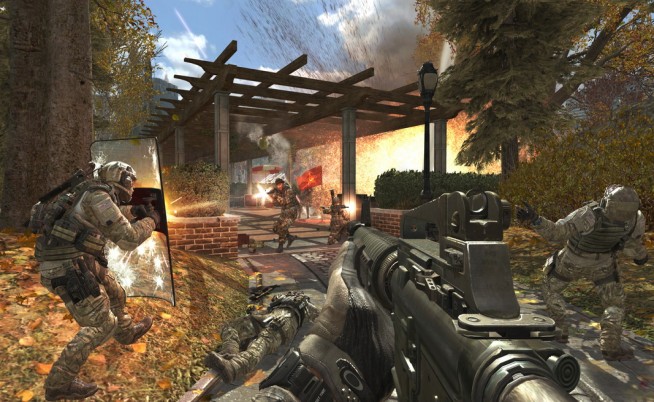 It was asked if any more sniper friendly maps would be included in any of the upcoming content drops. As it turns out, this is the case for the next drop in April. Bowling explained before attending this Hangout with Zagat, he actually just came from “Activision doing the next promo video for the next content drop for April, and in that drop there’s going to be a map that is very sniper friendly.” He added that “it’s a very large map, but it’s not like Liberation. It’s not open like that. It’s got a different style, but you’ll see videos of that very soon.” Xbox 360 Elite users will be getting two multiplayer maps in April.

Additionally, he stressed that “there’s also some close quarter maps,” and that maps that will focus on a completely different style of play. “We’re actually doing something really cool with the upcoming content updates that is very specific to a whole different type of play style. You know, instead of looking at medium and larger and small maps, this is very specific styles of maps but I can’t announce that yet.” Again, me mentioned that “there’s going to be be videos coming out” that we can all look forward to.

On the topic of returning classic maps, Bowling simply stated, “I hope. I mean, I can’t announce anything but I’ve been pretty open about my feelings about classic maps.” You can read more about his thoughts that we reported on here. He continued, “I want to see them and I wanted to see them outside the normal DLC… I don’t want them exclusive. I don’t want release date restrictions. I just want them. But, we haven’t confirmed anything. We haven’t announced anything.” He concluded, “there’s so many good Modern Warfare maps that I’d like to see in Modern Warfare 3. I think it would definitely improve the gameplay.”

Of course, everyone wants to know if Infinity Ward would still consider weapon DLC, something Bowling spoke about earlier. Bowling answered, “…we don’t know.” Though he did add with a bit of hope, “I mean, we still have a lot of months in the content season. We’re open to it. Right now, we’re focused on, you know, additional modes and maps and locations. But anything’s really possible. We want to look at expanding it a lot of new ways. Well, we’re working on a lot of stuff – testing a lot of stuff. So, I can’t confirm anything until that testing phase, or prototyping phase is done and I’m sure something will happen.” So while we may not see weapon DLC anytime soon, we can expect infinity ward to expand the gameplay in interesting new ways.

Let us know in the comments below what you think these “different styles of play might be” if you think weapon DLC will ever make it into MW3.