by David Veselka
in Features, News

As technology grows and gaming matures, game makers are able to conceive massive open worlds shared by millions of gamers or craft finely-tuned competitive multiplayer experiences with innovative new social features. But what good does the push toward social or shared-world gaming do if the simple and mundane act of finding other people to play with still hasn’t evolved past sending awkward and random party invites.

Party Up Founder Mat Houchens says his new project is “an application that allows you to find another gamer in real time who is looking to play the same game as you.” It sounds stupidly simple, but Mat hopes that the work he and his team are doing will have a major impact on an often overlooked aspect of online gaming.

“We want to increase your experience playing online so you play the games you already love even more and make new friends along the way,” reads Party Up’s website. “Playing online with people you know makes the experience better and we want to make that process simpler.”

We’ve all been there: in the mood to socialize over a few rounds of Domination, form a capable team that will ‘steamroll kids’ in Slayer, or combine forces to conquer a challenging Raid fight, but none of your friends are online. You text them to log on, but, darn, sometimes real life just gets in the way. You’re left with three options: hop around from team to team in random matchmaking, send out random party invites and pray for a pleasant voice communication experience that won’t result in your mother being insulted, or log off and hope for better luck next time

It can be a bummer and, aside from digging through the internet to find the proper forums or LFG (looking-for-group) sites, there aren’t many universal solutions. I recently caught up with Mat to find out if Party Up, which is still very early in development, might do the trick.

MP1st: Party Up is an app that lets gamers find other people to play with online and in real time. Can you explain what you mean by “real time” and give an example of what the process of finding someone else to play with might look like?

Mat: “When you want to game, often times it’s not planned and is spur of the moment. What we mean by real time is you only see posts that are recent enough to still be valid. When you are looking for someone to play right then, you don’t want to have to wait hours, you want someone within minutes of your desire to play. So our app will have a maximum shelf life for a post and then disappear forever so only relevant posts remain viewable. We’ll be sharing screenshots in future updates that will shine more light on the exact process.”

MP1st: Gamers often use “LFG sites” within their own community for a specific title, but Party Up’s aim is to broaden that service to multiple games and multiple platforms. Do you see it being primarily used for co-operative titles, or do you see Party Up also being an option for gamers to create entire multiplayer lobbies, like a 4v4 Custom Game in Halo, for example?

Mat: “I think that’s just one of many examples it can be used for. Any game that you can play with someone remotely online will be a potential use for Party Up to help connect gamers looking to play.”

MP1st: What are some of of your favorite Party Up features that might stand out from other LFG sites?

Mat: “We’re exploring API integration options that allow our users to send messages and add people directly without leaving the site. That accompanied with real time discussion and cross platform and multiple game support should help increase the desire to use our application to find gamers.”

MP1st: Do you have a time-frame for how long the beta might last? What sort of feedback are you hoping to gather?

Mat: “It will start with a closed, invite only beta with the first wave being select groups that sign up prior to launch. We’ll give the first waves of users the ability to invite up to 10 friends to help increase the user base slowly for system load testing and to allow the user base to expand at a controllable level. We’re looking for feedback from users on what they think would make the experience even better. We even have a process ready to go for co-creation so users can help prioritize upcoming features.”

MP1st: So, how did the idea for Party Up come to fruition? Do you feel that support for group or clan-finding in multiplayer games is lacking today?

Mat: “I can’t even count how many times I wanted to play a game but didn’t have anyone online at the time and got stuck playing with a random lobby and the experience just sucked. It’s more fun to play with people you know and that’s the goal: to help forge new friendships and increase a player’s experience while gaming. I think it’s too hard to find new friends online to play with and I know from my prior communities I’ve built that it can create lifelong friendships and everyone should have the opportunity.”

MP1st: After launch, are there any future and, perhaps, more ambitious plans for Party Up that you can tell us about?

Mat: “While our website will be responsive and mobile friendly, we do have goals to get this as a mobile app that you can download to provide push notification support to help let you know when there’s opportunities to play based on the people online.

“We do have a lot of future features that are planned after the beta is released but those will have to remain with us for the time being,” he said with a smile.

However, Mat was kind enough to provide us with a first-ever screenshot of a work-in-progress mock-up of what Party Up might look like in-browser. He notes that games in the background aren’t yet in their respective category and are included for display purposes only. 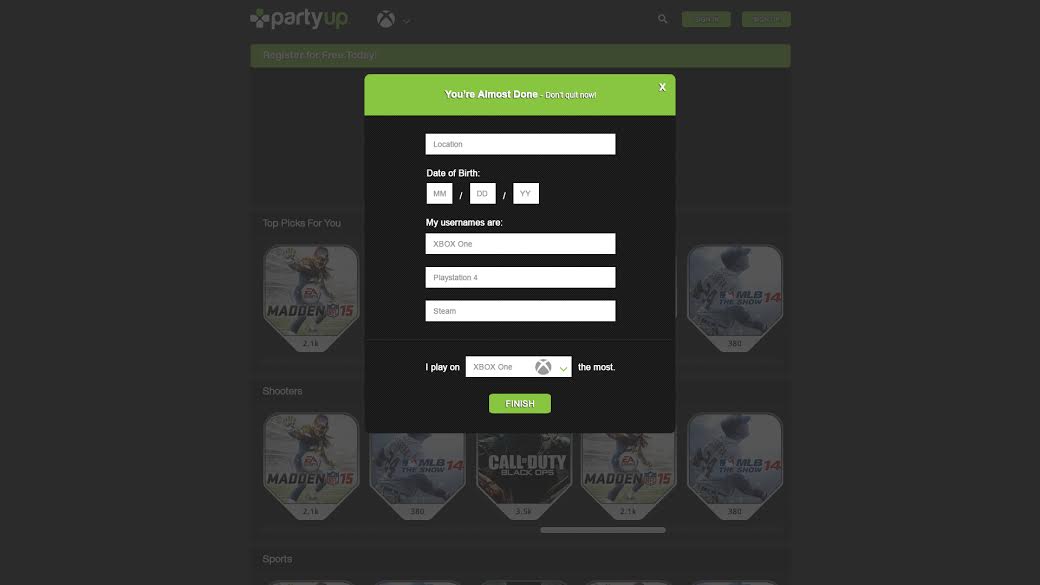 Mat and his team plan to have Party Up’s first closed beta up and running by early April, though more concrete details are coming later this month. While there is no crowd-funding site associated with the project, Mat says that “the best thing for us would be to share the homepage with the sign up form to help spread the word about signing up for the beta. The more users we have when we open the beta the better the experience will be for all.”

If it sounds interesting to you, here are the links you’ll need to keep up with Party Up’s development and get involved in the upcoming beta: