The latest batch of micro-DLC items have now made their way to the PlayStation 4, PlayStation 3, and PC version of Call of Duty: Ghosts after previously landing on Xbox One and Xbox 360.

In addition to new character and personalization packs, Infinity Ward is also making previous DLC weapons available, including The Ripper and The Maverick. You can see what’s new, including pricing details, in the details below.

If you missed it, developer Infinity Ward also debut the first trailer for Ghosts’ fourth and final DLC, Nemesis, including a remake of the Call of Duty 4: Modern Warfare map, Shipment. Check out the four new maps and watch the trailer here.

Provides players with two different configurations: medium to short-range capability as a Sub Machine-Gun (SMG), and medium to long-range as an Assault Rifle (AR). This unique 2-in-1 weapon has the ability to switch from SMG to AR and back again on the fly in the midst of battle, at the touch of a button, giving maximum flexibility to adjust to a variety of map types and tactics. $3.99

Outfitted with a lightweight wood stock and a digital screen display, players can choose to use the Maverick as either an assault rifle or sniper rifle, depending on their tactical needs. As an Assault Rifle the weapon’s fire rate becomes fully auto with relatively high damage at range, and as a Sniper Rifle the Maverick sports an advanced scope and a semi-auto rate of fire. $3.99 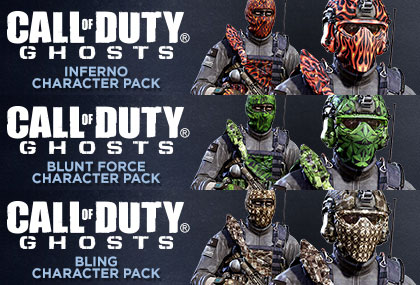 A firefight really becomes a fire fight with the Inferno Character Pack. Burn down any multiplayer match by equipping this eye-catching uniform and 2 different headgear options. $1.99

Arm yourself with the Blunt Force Character Pack and enemies will experience chronic defeat at your hands. The pack comes complete with a leafy uniform and 2 different headgear options. $1.99

Live the high life head-to-toe with the Bling Character Pack. Blind your enemies with a gold and diamond accented uniform and 2 different headgear options. $1.99

Sometimes you have to engage in Post-modern warfare. Deploy with the vivid Abstract Personalization Pack, complete with a masterfully painted camo, ink-splattered reticle, patch, playercard and background. $1.99

The Tattoo Personalization Pack gets you ready for life on the high seas. Set sail with a nautical camo, anchored reticle, as well as patch, playercard and background. $1.90

More dragon heads equal more fire, and that is just what the Hydra Personalization Pack delivers thanks to a fiery camo, reticle, patch, playercard and background. $1.99

Stalk your prey in the shadows with the Leopard Personalization Pack, featuring an animal print camo for your weapons, plus a themed reticle, patch, playercard and background. $1.99

Send your enemies to the grave with the Skulls Personalization Pack. Deck your kit out with an undead themed camo, reticle, patch, playercard and background. $1.99

Look light-years ahead of your competition with the Nebula Personalization Pack. This pack comes complete with a nebular camo, reticle, patch, playercard and background. $1.99