Patiently waiting for the next Mortal Kombat X character reveal? You should already know that NetherRealm Studios is set to reveal their next character some time during EVO 2014, thanks to Boon’s cryptic tweets.

But, the question is, when and where they will make this announcement? Thankfully, the Mortal Kombat Facebook page has narrowed down when exactly we’ll get to learn about another roster addition to Mortal Kombat X.

Check out the image below: 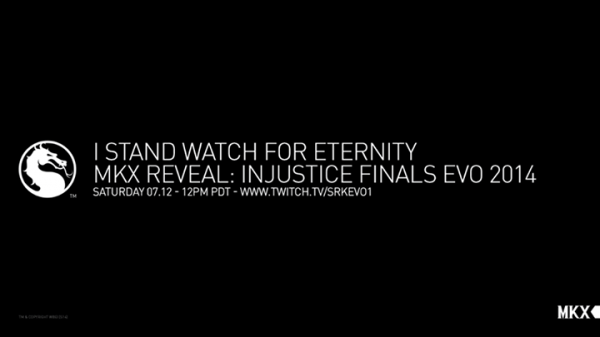 Unsurprisingly, NetherRealm Studios will be revealing a new character during the Injustice: Gods Among Us finals on Saturday, July 12 at 12PM PDT. However, the quote included in the image above is very interesting as it gives us a big clue as to who it might actually be.

It wouldn’t be surprising if either Fujin or Raiden happen to be the character revealed on Saturday, seeing how they both “stand watch” over Earthrealm in the original Mortal Kombat storyline and are both “eternal” due to their God status. As someone who’s been watching the events of Mortal Kombat unfold for quite some time, Shinnok is also a possible candidate. What do you think?

Check back with MP1st during the EVO 2014 event to see who is officially revealed.

Mortal Kombat X is slated for a 2015 release on the PC, PlayStation 3, PlayStation 4, Xbox 360 and Xbox One platforms.

Borderlands: The Pre-Sequel – Behind The Scenes Dev Diary With Gearbox Software and 2K Australia