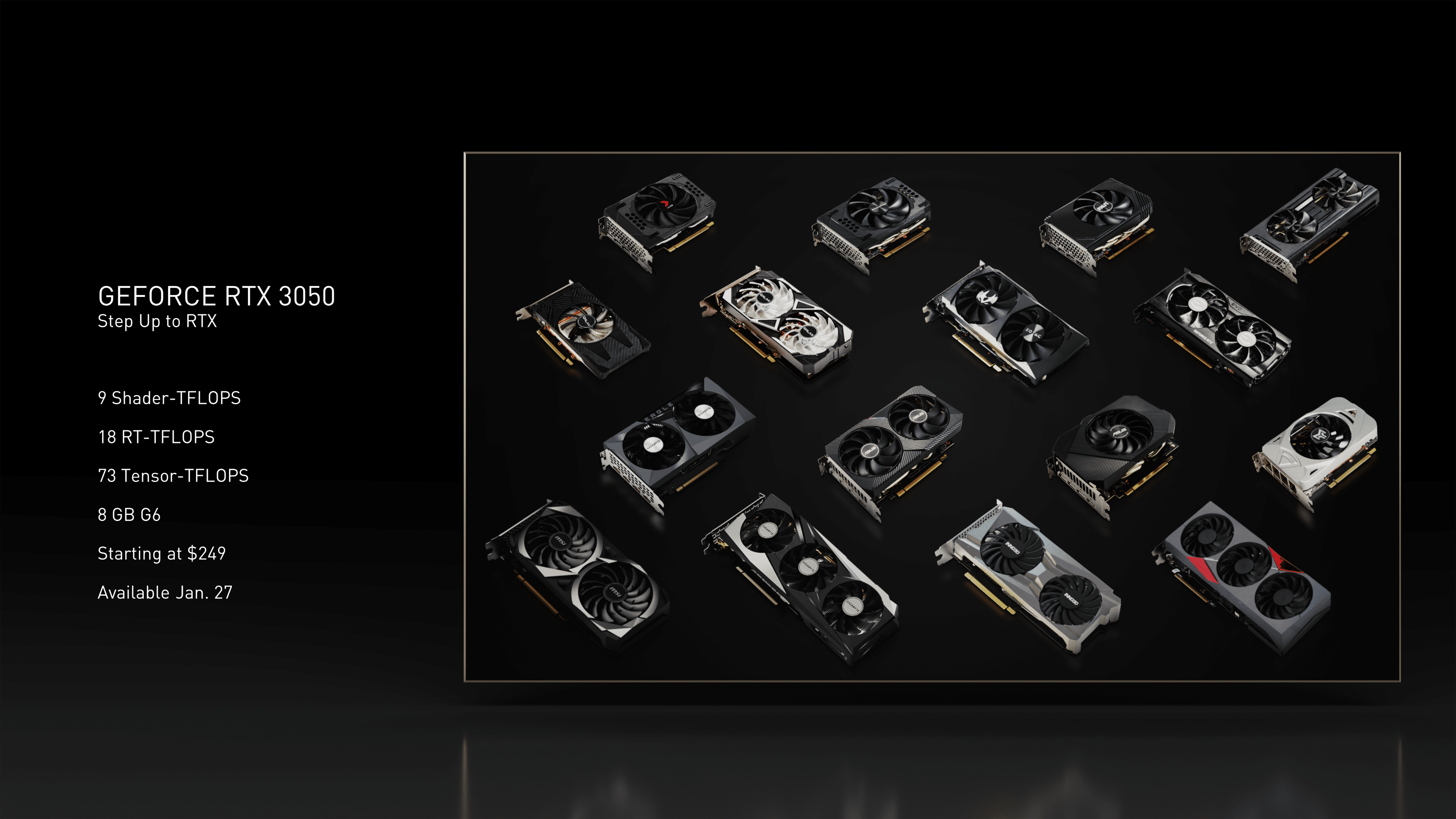 CES is once again upon PC gamers across the world, and Nvidia has blasted off with their announcements for a brand-new GeForce RTX 3050, 3080 Ti and 3070 Ti laptops, new RTX-powered laptops, Omniverse for creators, and so much more! Check out a rundown of everything announced in the Nvidia CES keynote as well as the video of the keynote itself.

The 48-minute keynote revealed the following:

The world’s top manufacturers are bringing to market more than 160 gaming and Studio laptops based on the revolutionary NVIDIA Ampere architecture, with second-generation RT Cores for ray tracing and third-generation Tensor Cores for DLSS and AI, creating the thinnest, lightest and most powerful laptops ever.

NVIDIA’s launch of the GeForce RTX 3080 Ti laptop GPU brings the flagship 80 Ti class of GPUs to laptops for the first time. Featuring 16GB of the fastest GDDR6 memory ever shipped in a laptop, the RTX 3080 Ti delivers higher performance than the desktop NVIDIA TITAN RTX™. RTX 3080 Ti laptops start at $2,499.

NVIDIA is further expanding its Studio platform of hardware, software and exclusive applications that helps creators get from concept to completion faster.

This includes a major update to NVIDIA Canvas, a painting application that uses AI to generate landscape images from simple brush strokes. Built from NVIDIA’s GauGAN2® research, the app produces images that are 4x higher resolution than in the past, with five additional elements like flowers and bushes. The new Canvas app is free to download.

Bringing the performance and efficiency of the architecture to more gamers than ever, the RTX 3050 is the first 50-class desktop GPU to power the latest ray-traced games at over 60 frames per second. RTX 3050 makes ray tracing, which is the new standard in gaming, more accessible than ever before.

With 75 percent of gamers still playing on GTX GPUs, the 3050, which also includes second-generation RT cores as well as third generation Tensor cores for DLSS and AI, represents a compelling upgrade opportunity to step up to RTX.

The RTX 3050, which comes with 8GB of GDDR6 memory, starts at just $249 and will be available on Jan. 27 from NVIDIA’s worldwide partners.

With the global growth in esports, the demand for esports displays has been doubling each year. 1080p displays have ruled esports for over a decade — as the lower resolution has enabled higher frame rates and faster refresh rates. With today’s top GeForce RTX GPUs rendering esports games well above 360 fps at 1440p, the industry is primed for a change.

More games, more devices and improved networks are being delivered to the GeForce NOW ecosystem. Today NVIDIA announced the extension of its partnership with Electronic Arts, bringing Battlefield 4 and Battlefield V to GeForce NOW, streaming today.

What do you think of these new graphics options from Nvidia, especially that cheap RTX 3050? Let us know in the comments below!

Wreckfest Update 1.018 Races Out for Winter Fest This January 4