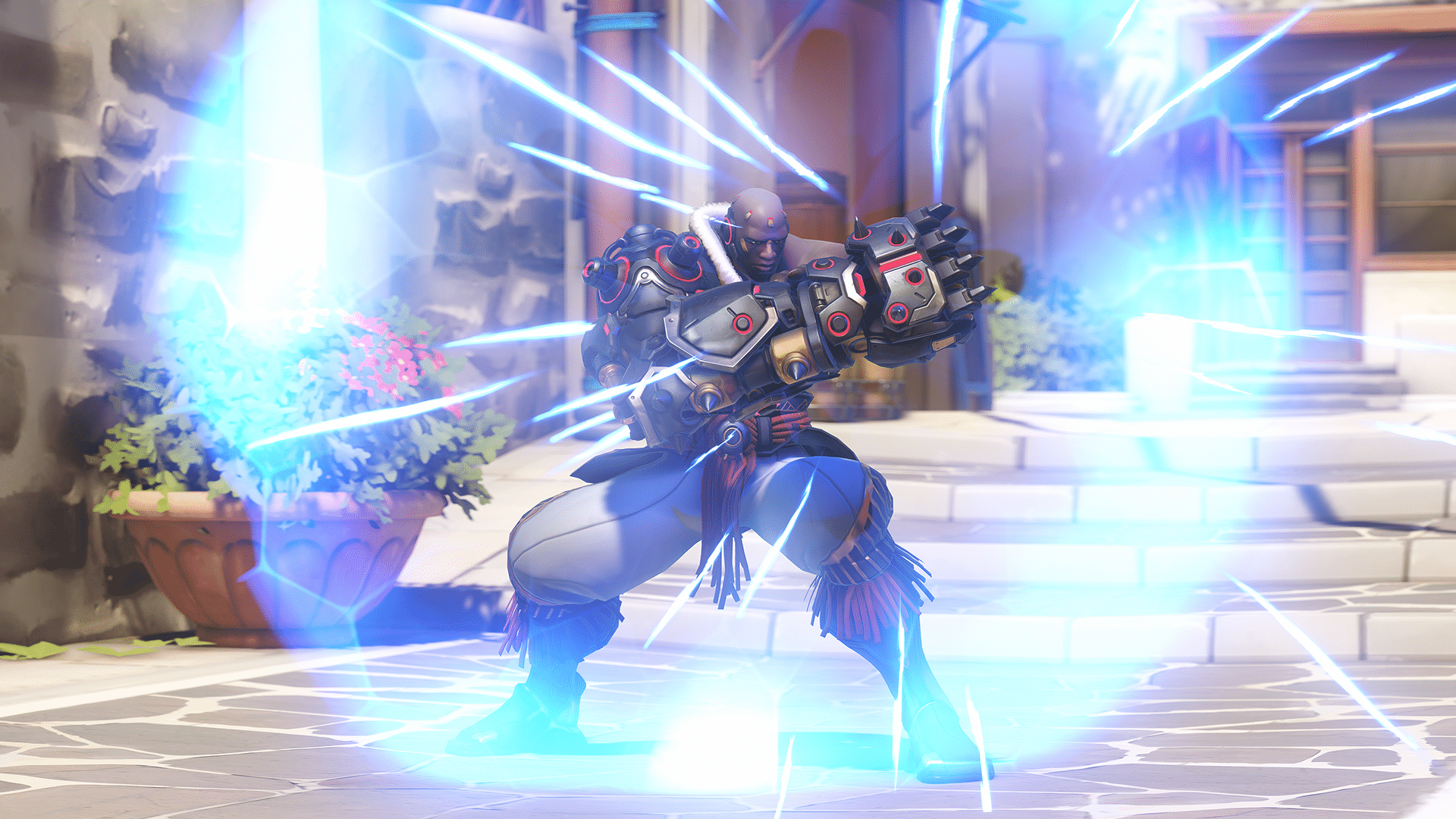 Blizzard has overhauled Overwatch 2 Doomfist and Orisa for the ongoing beta, with both characters now receiving tank changes for the game! As further explained in a detailed post, both heroes have received significant changes to their kits allowing them to fulfill their tank roles better. Check out the details on the abilities overhaul below: 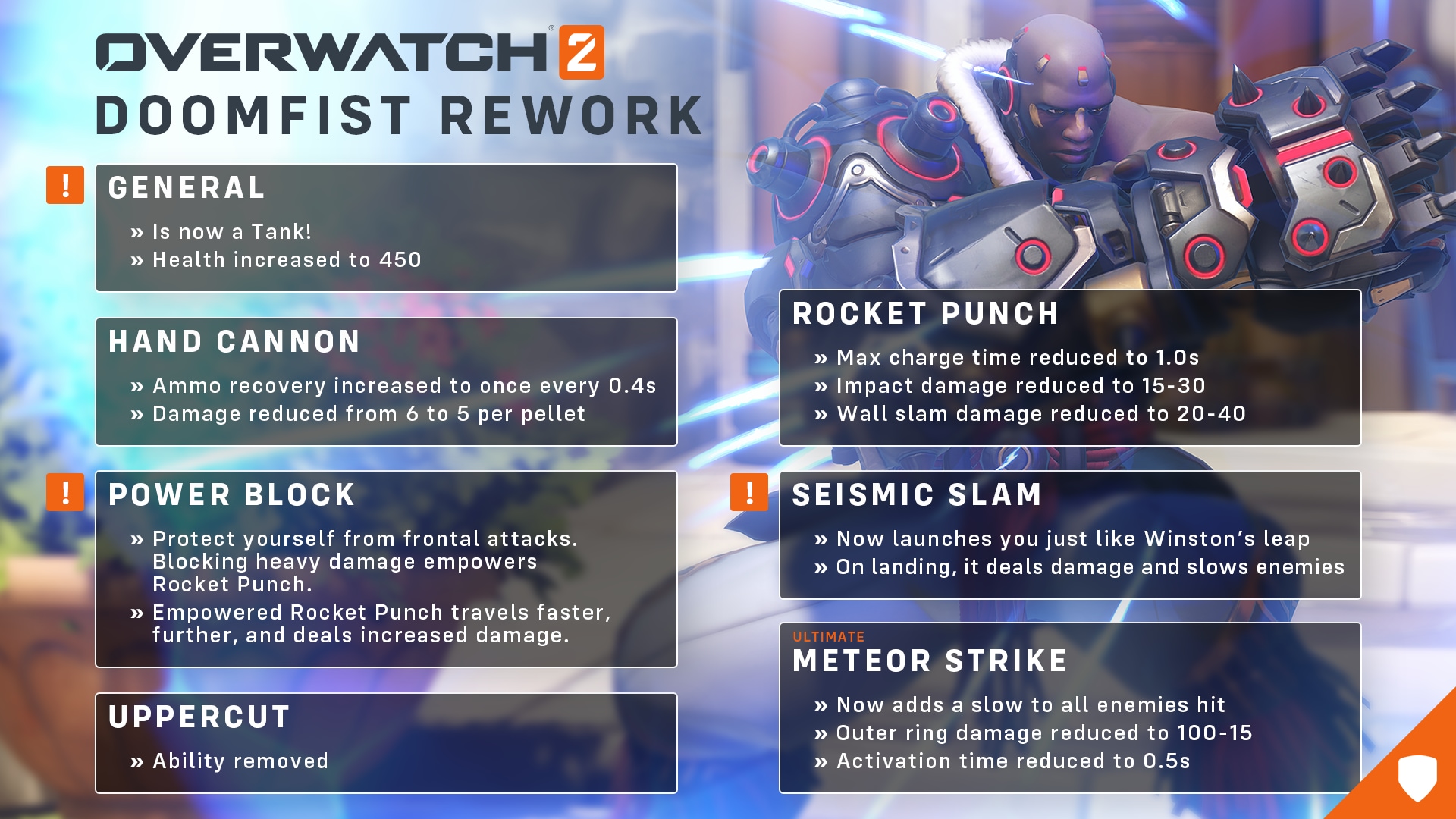 Doomfist’s current playstyle is unique, even for a damage hero: He’s a fast-paced, mobile, and lethal brawling machine.

His base health is increasing from 250 to 450, putting him much more in line with other tank heroes. Hand Cannon will function similarly, trading faster ammo recharge for slightly less damage. Rocket Punch is quicker and deals less damage, but still has the potential to knock back enemies.

Power Block is the new core of Doomfist’s kit. With Power Block, Doomfist enters a defensive stance that reduces all damage taken from the front by 90%. Doomfist’s gauntlet becomes charged if he blocks enough damage with Power Block. His charged gauntlet empowers his next Rocket Punch’s damage, knockback radius, travel speed, and distance. His targets will be stunned if he knocks them against a wall.

Seismic Slam now launches Doomfist into the air towards where you’re aiming, like Winston’s leap. Upon landing, he creates a shockwave that damages and slows enemies. He has many similarities to other disruptor tanks like Wrecking Ball or Winston, so it’s important to be very aware of Doomfist’s placement. For example, remembering that Power Block only blocks damage from the front is key when jumping into the enemy team with Seismic Slam; you’ll want to ensure that you jump all the way over your enemies so you can Power Block their damage and Rocket Punch them into your team without taking heavy hits from the back.

Doomfist’s ultimate, Meteor Strike, has gained new utility and a shorter cast time. Overall, the damage has been reduced, but the impact damage at the center will still be a hard hitter. The knockback has been removed and replaced by a slow for all enemies hit, making this ability a great initiating tool for your team. This modified ultimate, paired with his tank-aligned changes, enables the quick, impactful gameplay that he had as a damage hero. While his new positioning and combos require more finesse to manage, he has transformed into a more approachable, free-flowing, and impactful tank—all while feeling familiar to current Doomfist players. 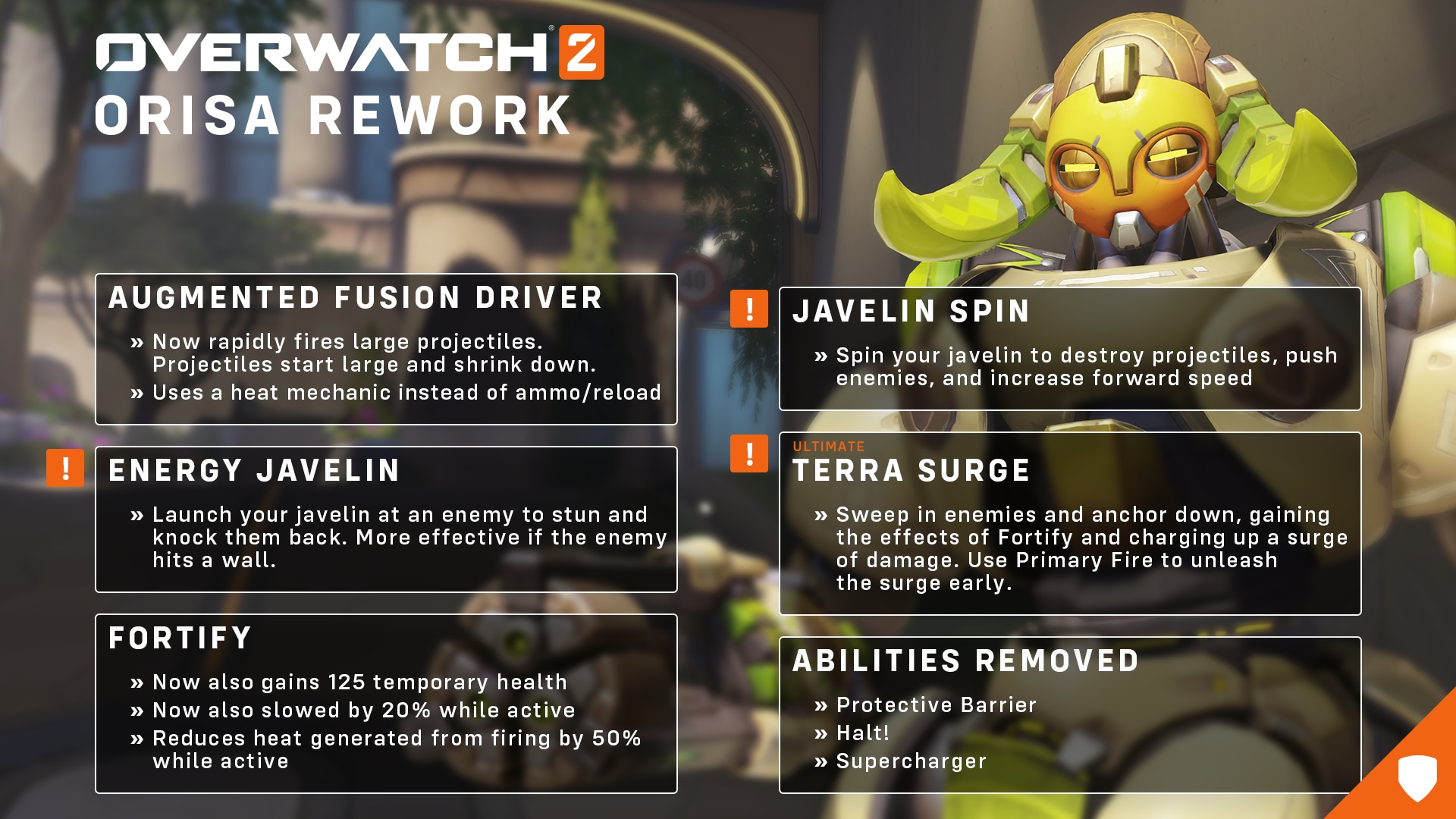 While some of Doomfist’s power was shifted to his defensive abilities to make him a viable tank pick, Orisa underwent the opposite. The team noticed that she struggled with brawling and toe-to-toe engagements, so we had to adapt her into the future of the game.

Her health and armor are being increased to help her push head on into the enemy team. Orisa’s primary fire is a projectile that is larger and does more damage the closer she is to enemies. Instead of ammo, her primary fire builds up heat that only decreases when not firing her weapon. If her weapon overheats, it will be unusable for 3 seconds. Orisa’s secondary fire, Energy Javelin, is now a skill shot projectile javelin that impacts the first enemy in its path.

Fortify has received a few adjustments to fit her new playstyle, including generating less heat with Orisa’s primary weapon, allowing her to fire it for longer. The ability also provides 125 extra health, giving her increased survivability in team fights.

Terra Surge is Orisa’s new Ultimate ability. She becomes fortified and pulls in nearby enemies while charging up an area-of-effect attack. This creates a moment for the team to rally around and quickly coordinate combos. However, enemies aren’t bound to the center of Orisa’s pull like a Zarya Graviton Surge, so you will need to collaborate quickly to make the most of this ultimate!

In other Overwatch 2 news, a datamine has been started on the beta, with some information leaking about the game including the existence of a battle pass, PvE progression and more. Check it out here.