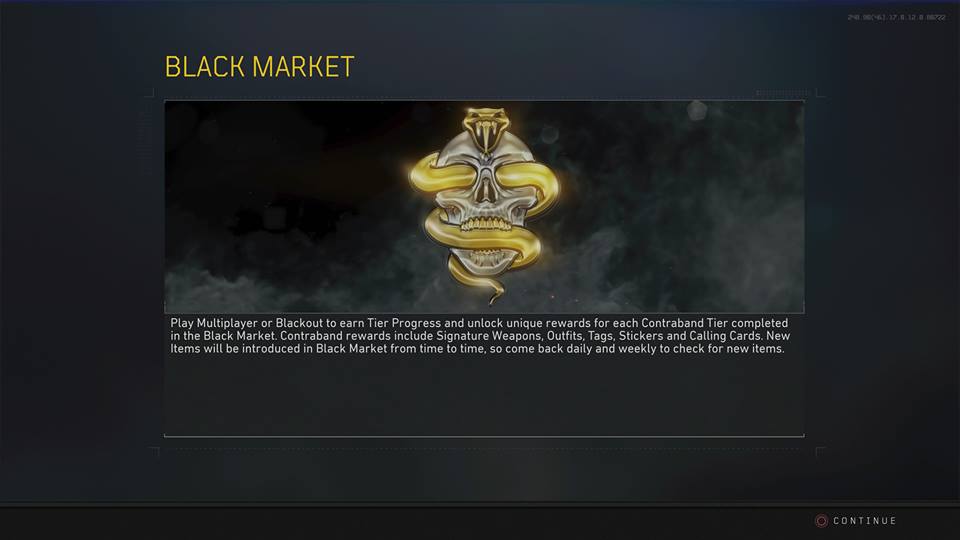 Just yesterday, Activision announced that the Black Market is making its way to Call of Duty: Black Ops 4. Thankfully, this version of the Black Market doesn’t rely on Supply Drops like in Black Ops 3, which relied on RNG (random number generator) for items. In Black Ops 4, there’s a “Contraband stream” that slowly fills up until you reach a certain tier, which in turn, will unlock a specific item.

Currently, the Black Ops 4 Black Market tier 200 is the max level available. If you’re planning on attaining that goal, you best have a LOT of free time on your hands. Over on Reddit, user DuvelMe gave a very good playtime computation on just how long it’ll take someone to reach the Black Ops 4 Black Market tier 200 max level, and it’s a staggering six hours and 40 minutes of game time each day. And in case you think DuvelMe was exaggerating, here’s how he arrived at that number:

The amount of time it takes right now to go up a tier is way too much. I don’t know if it is time based or xp based but right now it seems like it would take you at least 10 games of TDM or KC to go up a tier. There’s only about 50 days to get to tier 200, which means that you’d have to go up about 4 tiers a day, that’s 40 games every single day. Let’s say every game lasts for about 10 minutes. that’d mean that i’d have to play 400 minutes or 6 hours and 40 minutes straight every single day just to reach tier 200. Please don’t tell me y’all are forcing people to buy their way to tier 200, that’d be garbage.

DuvelMe might have a point, as I’ve been playing since yesterday when the Black Market was made available, and I’m still only at Black Market tier 2.

If you’re playing Black Ops 4 multiplayer, how long does it take for you clear a certain tier and move up? Is this grind OK for you or is it a tad too much? Let us know what you think in the comments below.