PlayStation All-Stars Battle Royale has officially received a release date, and the pre-order goodies have also been revealed. That’s not all, yesterday at Evo 2012 Sony announced two brand new characters that’ll be joining the All-Stars roster, Heihachi and Toro.

Release Date and other Info.

Playstation All-Stars Battle Royale is set to release on October 23rd, exclusively for the Playstation 3 and PS Vita. For those who pre-order on either PS3 or Ps Vita, you’ll receive a download code for some exclusive characters skins, which can be seen below.

At the time of announcement it was unknown who the other two character would be, but Sony has announced at this year’s Evo tournament that both Heihachi and Toro would be joining the star studded roster. This marks the 9th and 10th characters announced so far.

Don’t worry about those being the only characters, as we managed to reach SuperBot Entertainment via Twitter about the roster size, and they have confirmed that there will be more then 10 characters. It’s been also confirmed a while back that we would see more characters at this year’s Comic Con.

Playstation All-Star Battle Royale is a free-for-all crossover brawler, which features popular characters from the Playstation Universe along with additional third party characters. Players can expect the gameplay to be very similar to that of Nintendo’s popular franchise, Super Smash Bros, where you’ll be pit against three other players in hopes of reigning victor at the end of each match.

However, the biggest difference that players can expect is the way damage is dealt in the game. Unlike Super Smash Bros, players won’t actually take damage from hits, but instead attack others to build their “Super” meter.

Super attacks have three levels of strength, “supers” are the only way of defeating an opponent, known as of right now. Down below is some gameplay demonstrating this gameplay mechanic.

So far the confirmed characters are:

The game will feature both local and online multiplayer play for up to 4 players. Each stage will feature some sort of dynamic environment that’ll help shape the battle of a match. Players can also take advantage of items, such as the hedgehog grenades from Resistance, that’ll drop randomly throughout the stages.

So far we have five confirmed stages, each of them containing a mix of multiple games.

Metropolis – Mix of the Ratchet and Clank and God of War series.

Hades – God of War and Patapon

Dojo! –  Parappa the Rapper And Killzone 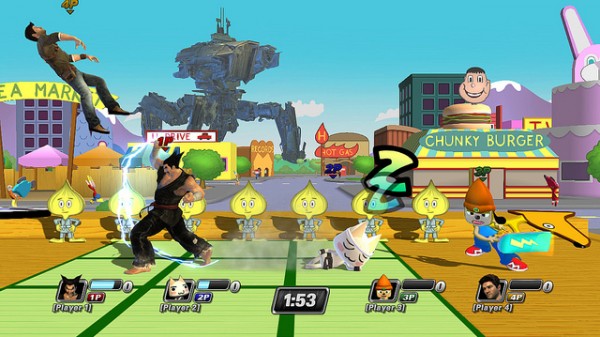