Here’s something interesting that might make you concerned with today’s youth. Apparently, a teenager who has the PSN ID of “SpangeBaab” which is one of his many PSN accounts. has the ability to disconnect people from PSN if they rub him the wrong way.

This was reported by Reddit user DowntownReaper, who shared his tale of this unfortunate incident earlier today.

“So today a group of friends of mine were DDOS by a gamer known as Decaf Gamer ( youtube account) SpangeBaab ( PSN account, he has several accounts) . He joined our party today and made random noise until we kicked him out of the party. he then returned to the party and had a confrontation with the party host. saying ” you like kicking people from parties” ” im going to disconnect you now”. host kicked him again then the event occurred he Disconnected one friend ( breakid psn) then joined and bragged about the disconnect. we kicked him again and then my next friend (xionaryon) was disconnected. He came back bragged about it again and then disconnected a my last friend KOWABUNGA23. he then came in and bragged to me that he wasnt gunna kick me just because i joined late. i sent reports through PSN but i feel as if i couldn’t fully give them the entire story. Hopefully they are able to do a full investigation. This is a teenage kid that is causing damages and conducting a highly illegal act. the only really evidence i have is his account profile that stats ” DISRESPECT=DISCONNECT” he purely brags about it in his account. something PLS tell me PSN can investigate this event further than just reading my post. this kid is conducting a crime and must be confronted and reprimanded.”

According to the Reddit poster, none of his friends have been able to reconnect to PSN, though one did but got disconnected yet again.

So just who is this internet hero? His PSN ID is “SpangeBaab” and he also has a YouTube channel called” Decaffeinated_Gamer, though his videos are a mish-mash of assorted clips. Possibly the highlight of this one is how he’s selling a “modded account” for Grand Theft Auto V.

The PSN profile page of SpangeBaab is this one: 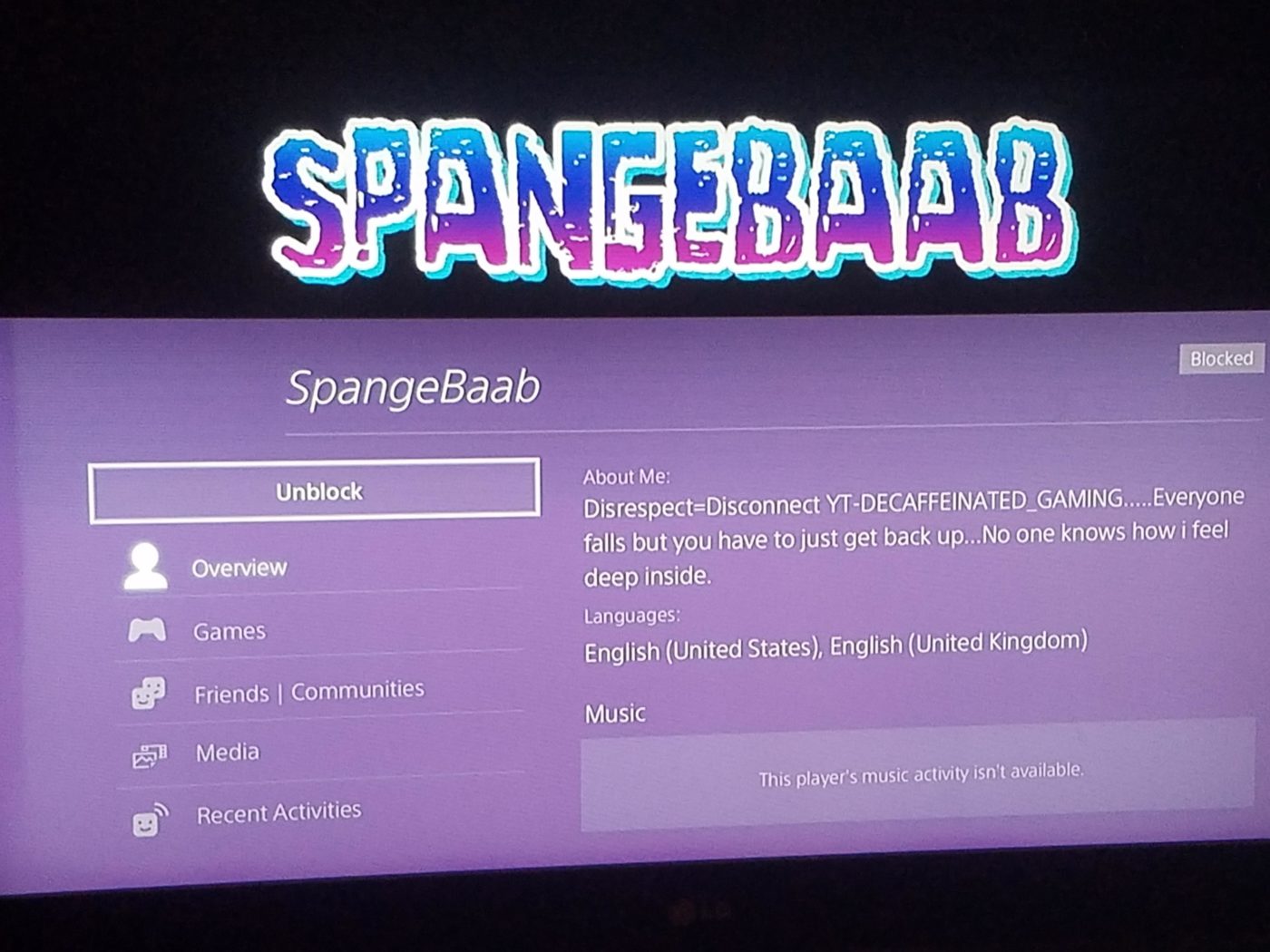 As you can see, he mentions that a “disrespect” equals a disconnect, which is an odd way of looking at things, I guess.

Thankfully, another Reddit user (Nicologogixs), had the foresight to do dig up this teenager’s Facebook profile, and in turn his parents, and messaged them (his parents) that their son is doing something illegal.

Regardless if you feel disrespected or not, intentionally making life miserable for everyone by not allowing them to connect is a serious misstep. Let’s hope Sony can take a look at this and act on it soon.

We’ve contact PlayStation PR to ask for a statement on this and will update the story if and when we get a response back.

Have you experienced anything like this before? Or know anyone who suffered through it? If so, send us an email at tips@mp1st.com.

Gamer With No Arms Wins a Match of Call of Duty: Black Ops 4 Blackout